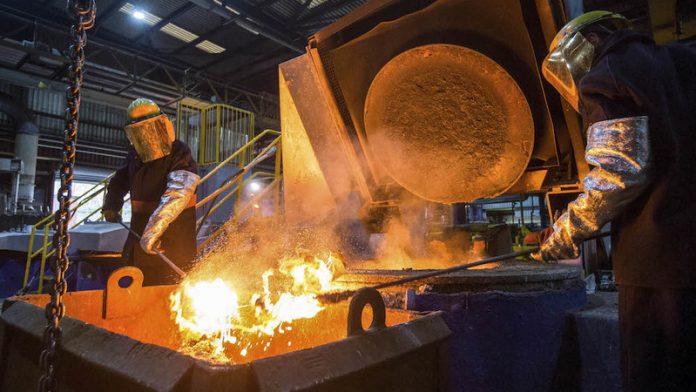 The government is seeking to increase controls on the export of scrap metal, but there are sellers and buyers alike who say there is no use tightening up an already flawed system.

The International Trade Administration Commission of South Africa (Itac) is in the process of mulling inputs on its proposed amendments to the price preference system (PPS), which requires scrap merchants to first offer their product to local consumers at a discounted price, calculated monthly, for a set number of days. Proof of having done so with no resulting purchase is required before an export permit can be issued.

Itac first published guidelines on the PPS in September 2013 to curb exports of scrap metal — a R12-billion-a-year business — that fetch better prices abroad.

Itac then published amended guidelines on September 12 2014 to strengthen its administration. Further amendments to the system were proposed in December.

These included increasing the discount rate at which some types of scrap must be sold to local consumers, as well as channelling all exports through Port Elizabeth.

But the system is widely viewed as having been largely ineffective. Scrap merchants and consumers have accused each other of sabotaging the process.

Domestic buyers are said to be expressing interest while holding up the export process, without ever completing the sale. And scrap merchants are accused of offering the product locally, only to stall the process until an export permit can be issued.

“I don’t think the PPS should be the focal point for control. The market forces will determine the price,” said Evert Swanepoel, centre director at the Copper Development Association of South Africa, which represents members who buy local scrap.

“We need the scrap merchants. Not for a moment are we saying they must be pushed down. We need them and they need us.”

The discount to the market price was not practical, he said. “We must make it attractive for scrap merchants to sell to us.”

The scrap industry has seen a number of closures, said Starkey. The employee numbers of MRA members have dropped and the scrap industry is estimated to have lost 40% (9 000 employees) of its formal workforce since the introduction of the PPS. But how much of that can be attributed to the economic downturn as a whole is unknown, said Starkey.

“Things are going really, really slow at the moment,” said Donovan Korff, a partner in Cobra Metals, the first scrap merchant established in the Malvern area of Johannesburg in 1980. “Businesses all around us are closing; things are not going well at all.”

Cobra Metals doesn’t export but has felt the impact of the PPS through the larger merchants it supplies. “The prices they are offering us, because they can’t export, are not very good. We are just hanging in there for now,” he said.

One notable contentious issue arising from Itac’s published proposals is that all scrap will be exported through Port Elizabeth.

The idea is to centralise expertise at one port, but it will have a knock-on effect for local transport companies, which have submitted their objections to Itac for consideration.

“The added costs, at a time of a commodities downturn, would make scrap unviable to collect,” said Starkey, adding that it could even have an environment impact, with beverage cans and old cars lying uncollected in the streets.

Moving product from Johannesburg to Port Elizabeth reduces the value by R700 a tonne. In some grades, that would be a 50% reduction in price. “It’s hardly worthwhile,” said Starkey. “Our business is a margin business … There are people affected, including those in the informal sector — the poorest of the poor.”

It is important to note, said Starkey, that local consumers don’t want all scrap.

“South Africa is a net exporter of scrap. We produce more than local producers can use. There is a surplus of two million tonnes per annum.”

XA International Trade Advisors director Donald MacKay said the regulation is based on the assumption that the demand for scrap metal is sufficient. “But there is more than one product and many different grades of scrap. And we don’t have a mechanism to deal with that distinction,” he said, noting that there is insufficient domestic demand for some grades of aluminium.

Swanepoel said the association members want to retain good-quality copper scrap. “There are certain types of copper scrap that can’t be refined here. We have no problem with that going out,” he said.

But Steel and Engineering Industries Federation of Southern Africa chief economist Henk Langenhoven said there was a shortfall in ferrous scrap (metals containing or consisting of iron) in the local market. Scrap is a vital input in this troubled industry, he said (see “SA’s steel industry woes have prompted new regulations”).

The acting director general at the department of economic development, Malcolm Simpson, said the amendments to the PPS were just one part of the draft regulations on the export of scrap metal.

“Its main aim is to address the theft of metal and copper cable from public infrastructure, which causes serious damage to the supply of electricity, water, train services and access to social facilities. Such metal and cable finds its way to the scrap metal market, whose products are used as inputs into production in South Africa and abroad. A significant part of the metals and cables collected is exported and specific measures were deemed necessary in respect of ports of exit.”

Simpson said the proposed measures were part of a wider effort by the state to address issues of domestic users and exporters who use or procure illegally obtained scrap metal.

This includes stiffer penalties for the theft of metal from public infrastructure, minimum jail sentences and tougher bail procedures, as set out in the Criminal Matters Amendment Act passed by Parliament last year.

Simpson said there had been a decrease in the declared value of exports of scrap metal. But additional measures may be necessary to improve the impact of policies in this respect.

Swanepoel, however, views the “drastic drop” in legal copper scrap exports as a potentially negative result, saying exporters may instead use different tariff codes to get their product through customs.

The discount the PPS requires is too low and unfair to scrap merchants, Swanepoel said. “It forces the industry underground,” he said. “You can’t open every container … There are 33 000 line items and five inspectors in total.”

Itac spokesperson Phillip Semela said it was not possible to attach a timeline to the amendment of the PPS at this stage.

“The reason for the proposed amendments to the current guidelines is to administer the PPS more effectively, particularly in accordance with the minister’s policy directive, and to improve on compliance and enforcement,” he said. “It is a continuous process to improve and to ensure sound administration of the system.”

Starkey said there had been an attempt to have the treasury approve export duty on scrap in the past but that it did not get the green light.

Instead, export controls have taken the form of the PPS.

Although the MRA has historically not been in favour of any such export tariff, Starkey said it was willing to consider it as the PPS is seen as “unworkable”.

Swanepoel agreed that an export levy would be a viable option and that this revenue could go towards increasing capacity in export control.

The tighter regulations that are being proposed to control the export of scrap metal most certainly have something to do with the trouble South Africa’s steel industry is in,  according to Henk Langenhoven, chief economist at the Steel and Engineering Industries Federation of South Africa (Seifsa).

The challenging environment facing the steel sector has already resulted in a major producer, Evraz Highveld Steel, closing its doors.

The industries that use scrap are lobbying the government to prioritise the use of local metals such as steel in infrastructure projects, despite the availability of cheap Chinese imports.

“Nobody can compete with the Chinese. That is the big problem worldwide,” said Langenhoven. “They are simply putting it on the global market at prices that cannot be competed with.”

Almost all countries, including South Africa, have protection measures against Chinese steel at the moment, Langenhoven said. Although the South African steel sector is vital for the mining sector, there is no denying it requires a more competitive edge.

“We did fall behind in terms of technology, there is no doubt about it. That is fairly widely acknowledged and has to be rectified,” said Langenhoven.

“[During apartheid years] we had sanctions; no one wanted to compete with us. And China was not even on the world map 20 years ago. All dynamics shifted and we didn’t keep up with the tech.”

South African steel accounted for 65% of the local market in 2002, but this has slipped to 48% now, according to Langenhoven.