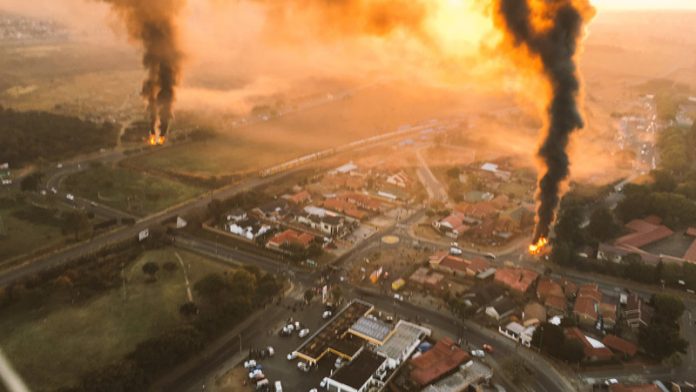 Violent protests continued for the second day running in Atteridgeville and Mamelodi in Tshwane, where residents are protesting against the naming of former Cabinet minister Thoko Didiza as the city’s mayoral candidate for the ANC.

A live report from EWN early Tuesday said there were at least three vehicles – a bus and two trucks – that were on fire in Atteridgeville, where roads were blocked with burning tyres. Shops were also looted.

Residents said they were not happy with Didiza and wanted mayor Kgosientso Ramokgopa to remain in his position.

However, Ramokgopa on Tuesday distanced himself from people protesting in his name, saying he was backing Didiza to take over.

“We (are) calling on law enforcement agencies to ensure we get a grip on the situation,” said the outgoing Tshwane mayor who is an ANC member.

The government on Tuesday condemned the violence in Tshwane in which as many as 19 buses have been torched.

“Government appeals for calm in all areas around the City of Tshwane and the peaceful resolution of differences,” said the acting director general of the government communication and information services Donald Liphoko. He encouraged community members to use democratic processes and channels available to raise their concerns.

“Violence, damage to property and infringing on others rights and free movement will not be tolerated by law enforcement agencies. Perpetrators will face the full might of the law. Whilst all South Africans have the constitutional right to protest, government reiterates its condemnation against any form of violence and intimidation during protests and encourages continued dialogue to resolve differences”, said Liphoko.

Late on Monday the Democratic Alliance called for calm.

“Tonight I call for calm in the City of Tshwane after the violence that erupted in Atteridgeville, Mamelodi, Soshanguve and Hammanskraal today – over the ANC’s imposed Mayoral Candidate, Thoko Didiza – escalated this evening,” said Solly Msimanga, the DA Mayoral Candidate for Tshwane.

Msimanga said the DA condemns the factions within the ANC that are fanning the flames of violence.

“I challenge ANC Secretary General Gwede Mantashe to intervene and stop the ANC infighting spilling further onto the streets of our City,” said Msimanga.

Violence also characterised the party’s meeting on Sunday at Tshwane’s event centre, where an ANC member was shot and killed as members fought over who should be chosen the capital city’s mayoral candidate.

However, the ANC said the violence was not of its own doing but an act of criminality.

Gauteng cops mobilised to assist in Tshwane
Meanwhile, cases of murder, malicious damage to property and intimidation have been opened following the protests, police have said.

The police, through the SAPS Twitter feed, said all members, including those on rest days, had been mobilised to assist in policing in Tshwane.

If the inflation-driving supply strain in the US lasts, it could put SA in a chokehold