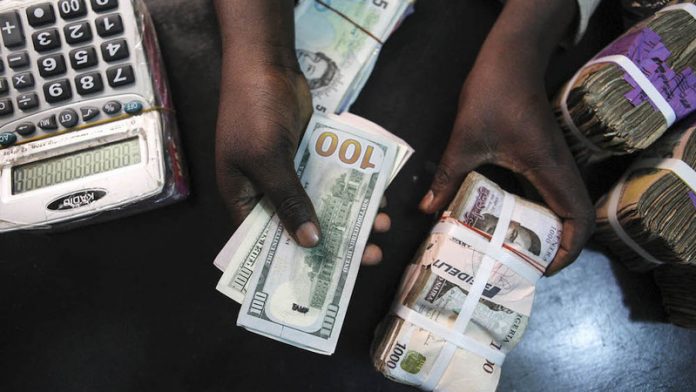 Pulling the peg on the naira means not only did the Nigerian currency lose almost a third of its value in just a matter of hours but, in dollar terms, Africa’s largest economy also lost a third of its gross domestic product (GDP).

When trading opened on Monday, the naira, previously pegged at between 198 and 201 to the dollar, fell to 260 within an hour and then slid to 280, where it continues to hover.

The Nigerian economy was measured at 95‑trillion naira in 2015, equivalent to $479‑billion. But after the naira was floated on Monday, the GDP value is substantially lower in dollar terms, at about $340‑billion this week.

The Central Bank of Nigeria said that, as of this week, it would no longer peg the exchange rate. Instead, commercial banks would set the naira to the dollar rate based on demand.

Nigeria still remains Africa’s largest economy. In second place is Egypt, with a 2.7‑trillion Egyptian pound ($304‑billion) GDP. But the Egyptian pound has been fixed at 8.85 to the dollar since March. Before that, it was fixed at 7.73.

South Africa’s R3.9‑trillion economy is equivalent to $264‑billion currently. But the volatile and highly traded rand remains the only fully free-floating currency on the continent.

Although Nigeria has unpegged the naira from the dollar, it is still managing the currency to some extent. For example, a list of 41 items, ranging from toothpicks and tomato paste, are not permitted to be imported.

When Nigeria rebased its GDP in early 2014, its GDP figures shot up and trumped South Africa’s, officially becoming the largest economy in Africa. In April this year, the International Monetary Fund said the Egyptian economy had also overtaken that of South Africa, which is now the third-largest African economy.

According to a KPMG economist, Christie Viljoen, this state of affairs is largely because of the depreciation of the rand by more than 50% between 2012 and 2015. The Egyptian pound has depreciated at a much slower pace, thanks to its tight management.

According to NKC African Economics, the rand on Wednesday had lost 24% of its value against the dollar over the past 52 weeks. It is one of the worst performers on the continent, trumped only by the Angolan kwanza (-39%), the Zambian kwacha (-46%), the Mozambican metical (-55%) and the Malawian kwacha (-64%).

Cobus de Hart, a senior economist at NKC, predicts the naira will settle at somewhere between 230 and 240 to the dollar for the year as a whole. De Hart said the naira fell to 282 on thin trading. If it becomes more liquid, it could depreciate to 300 to the dollar.

“Our concern is if it doesn’t track back to 250, that would lead to sharply higher inflation … [But] if the devaluation accelerates faster than anticipated, we see a risk of more restrictions being imposed on the market.” With currencies being managed in all other African economies, GDP numbers expressed in dollars may be a bit misleading, highlighting the need for closer inspection, Viljoen said.

“It [GDP in Africa] can be seen as an inaccurate way of looking at the numbers. But it is one of the simplest ways to do it and is something that people can easily understand,” he said.

Although devaluing the currency to this degree surpassed expectations, there was a sense that something had to give, said Ronak Gopaldas, the head of country risk at Rand Merchant Bank.

It was a bold move to combat a growing sense of economic crisis in the country triggered by a plunge in the oil price but also by policy paralysis and lack of co-ordination by the authorities, he said.

How the mechanics of such a “managed float” will work is very much a case of wait and see, Gopaldas said. “We are still going to see huge volatility.”

Although the Central Bank of Nigeria is committed to step in and further manage the currency should it be required, it will be hampered by its low foreign reserves — the lowest in a decade.

The new regime comes with a number of challenges, Gopaldas said. These include the continued struggle to access dollars, a massive spread between the exchange rate and parallel currency market rates, and restoring policy credibility.

Devaluing the naira will probably result in inflation, already north of 15%, spiking dramatically. “As an import-dependent nation, it will have a massive effect on the import bill, and so the consumer will also be affected,” Gopaldas said.

“Whatever policy option they chose was going to be painful, and no one voluntarily devalues their currency. But, in the long term, it will be beneficial for the country.”

On the upside, Nigeria’s government will enjoy the benefits of receiving more naira for their dollars, and exports could get a boost.