Gimmick or finger-licking good? You can now charge your phone from a KFC snack box 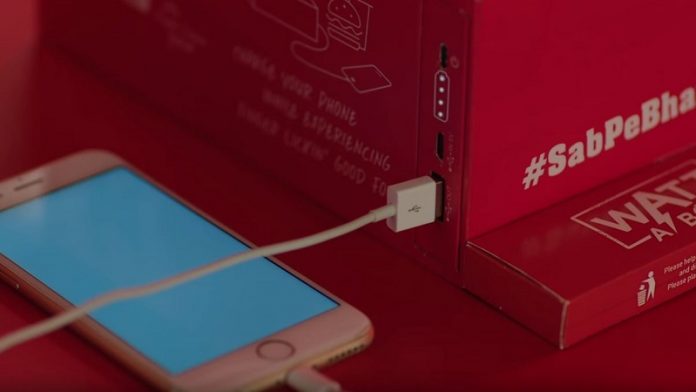 Last year fast-food chain KFC revealed a rather cool idea for music-loving visitors to its restaurant chain. The KFC Willows branch in Bloemfontein made use of bone conduction to let customers to listen to music at their table using nothing but their arms, without disturbing anyone else.

That idea went on to win a Grand Prix award The Loerie awards in Durban, the main awards ceremony for marketeers in the country.

Now, the food chain is out to steal headlines again with a clever campaign, by rolling out snack boxes that can charge mobile phones. But before we get too excited about it, we have to state that (for now) it is only available in India.

According to BGR, the takeaway firm has launched a 5-in-1 meal box called “Watt a Box”, which has  a whopping 6 100mAh battery bank stashed into one side.

“The box comes with magnetic flaps and contains your usual meal but has a power bank integrated on its side. The box also comes with micro-USB and Lightning cables to charge your iPhone or Android smartphones,” it wrote.

Once you are done with the meal you can still charge your phone on the go, as the battery bank is removable for later use. BGR did suggest that the battery may not be as capacious as claimed, however.

“We put an iPhone 5s to charge, which gained 17% battery after charging for half-an-hour. But the downside was that the power bank was drained during this process. We recharged the power bank to 100 percent and tried to charge a Redmi Note 3. But the power bank ran out of juice again with the phone gaining just 7 percent of charge,” it said.

If something like this would be rolled out in South Africa, we know that it would be a massive hit. Considering how much battery power listening to music can drain, combining the two technologies would be an absolute winner. Speaking of which, the packs themselves are only available as competition prizes inside restaurants or via KFC India’s Facebook page.

Below is a short video on how it works:

Above is a short video on how this works. –  htxt.co.za

All original words & media by htxt.africa by htxt.media are licensed under a Creative Commons Attribution-NonCommercial-ShareAlike 4.0 International License. Permissions beyond the scope of this license may be available at htxt.africa. Where images and material are supplied by rights holders outside of htxt.media, original publishing licences are indicated and unaffected.

Covid-19 and CVD: The heart in the time of crisis

Saho’s Omar Badsha believes in the power of people telling their own stories, but more funding to support this practice is crucial
Read more
Friday

Sixty years after the assassination of Patrice Lumumba, the DRC’s first prime minister, his remains will be returned from Belgium
Read more
Advertising
Continue to the category
Politics