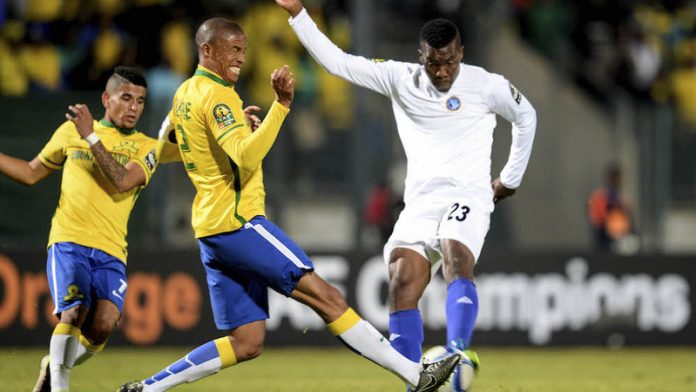 Mamelodi Sundowns got back-door entry into the group phase of the African Champions League and, to their credit, have grabbed at the opportunity, now emerging as genuine contenders for the title.

Wednesday’s 2-1 triumph over Enyimba of Nigeria at Atteridgeville was a second successive victory in 10 days in group B, although only one of the results will count.

Although Sundowns have had the three points they gained away in Algeria rescinded after the 2014 champions Entente Sétif were kicked out of the competition, they made a resounding statement of their potential with a rare success in what is usually a fortress in North Africa.

That 2-0 win was followed by a short period of rest for Sundowns, as coach Pitso Mosimane tries to juggle giving them something of a vacation but still keep his players in condition for the Champions League matches. All the group games are being played at a time when the other Premier Soccer League clubs are on holiday or starting their pre-season preparations, but Sundowns have to keep going.

There is now another brief break for the players after beating Enyimba in a performance that was convincing in patches but also exposed a predictable, and understandable, lack of sharpness. Sundowns also continue to concede at home in African club competition, much to the coach’s chagrin.

Success in home matches is key to advancing in the Champions League and Sundowns have made the perfect start. Now in a group of three, they need only win their next home game against Zamalek at the end of July to go through.

Enyimba have already lost twice and must travel to Cairo to play Zamalek, where they cannot be given much chance. Therefore they probably will not get more than three points.

The first two clubs in the now three-team group advance to the semifinals and Sundowns, who had been eliminated in the preliminary rounds but were given a reprieve when AS Vita Club from the Democratic Republic of Congo were found to have played with a suspended player, now have a very strong chance to make the final four.

Two successive defeats in group A for record-winners Al Ahly of Egypt are indicative of how open the field in this year’s Champions League.

Sundowns’ strong showing gives hope that this just might be the time for South African success in the continent’s top club competition. As Mosimane said after Wednesday’s victory: “We have to get over this complex of South Africans clubs not doing well in Africa.”

Sundowns next play on July 17 away to Zamalek and will return to work next week to prepare. A buoyant atmosphere reigns in the camp and there is every chance they can achieve a result in Cairo too. That would boost hopes even higher.