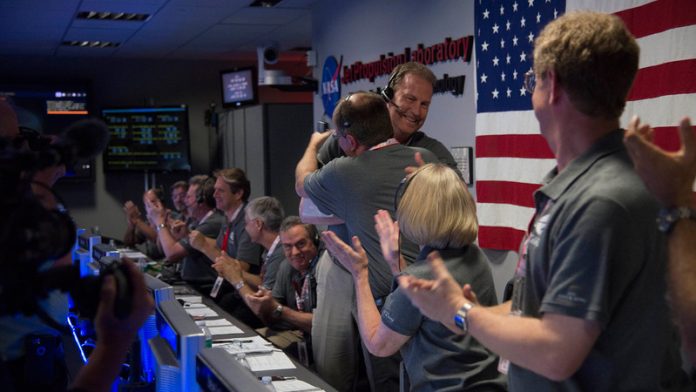 Nasa’s Juno spacecraft capped a five-year journey to Jupiter late Monday with a do-or-die engine burn to sling itself into orbit, setting the stage for a 20-month dance around the biggest planet in the solar system to learn how and where it formed.

Juno will spend the next three months getting into position to begin studying what lies beneath Jupiter’s thick clouds and mapping the planet’s gargantuan magnetic fields.

Flying in egg-shaped orbits, each one lasting 14 days, Juno will also look for evidence that Jupiter has a dense inner core and measure how much water is in the atmosphere, a key yardstick for figuring out how far away from the sun the gas giant formed.

Jupiter’s origins, in turn, affected the development and position of the rest of the planets, including Earth and its fortuitous location conducive to the evolution of life.

“The question I’ve had my whole life that I’m hoping we get an answer to is ‘How’d we get here?’ That’s really pretty fundamental to me,” Bolton said.

Jupiter orbits five times farther from the sun than Earth, but it may have started out elsewhere and migrated, jostling its smaller sibling planets as it moved.

Jupiter’s immense gravity also diverts many asteroids and comets from potentially catastrophic collisions with Earth and the rest of the inner solar system.

Launched from Florida nearly five years ago, Juno needed to be precisely positioned, ignite its main engine at exactly the right time and keep it firing for 35 minutes to become only the second spacecraft to orbit Jupiter.

If anything had gone even slightly awry, Juno would have sailed helplessly past Jupiter, unable to complete a $1-billion mission.The risky maneuver began as planned at 11.18pm EDT as Juno soared through the vacuum of space at more than 257 500km/h.

Nasa expects Juno to be in position for its first close-up images of Jupiter on August 27, the same day its science instruments are turned on for a test run.

Only one other spacecraft, Galileo, has ever circled Jupiter, which is itself orbited by 67 known moons. Bolton said Juno is likely to discover even more.

Seven other US space probes have sailed past the gas giant on brief reconnaissance missions before heading elsewhere in the solar system.

The risks to the spacecraft are not over. Juno will fly in highly elliptical orbits that will pass within 4 800 km of the tops of Jupiter’s clouds and inside the planet’s powerful radiation belts.

Juno’s computers and sensitive science instruments are housed in a 180kg titanium vault for protection. But during its 37 orbits around Jupiter, Juno will be exposed to the equivalent of 100-million dental X-rays, said Bill McAlpine, radiation control manager for the mission.

The spacecraft, built by Lockheed Martin, is expected to last for 20 months. On its final orbit, Juno will dive into Jupiter’s atmosphere, where it will be crushed and vaporised.

Like Galileo, which circled Jupiter for eight years before crashing into the planet in 2003, Juno’s demise is designed to prevent any hitchhiking microbes from Earth from inadvertently contaminating Jupiter’s ocean-bearing moon Europa, a target of future study for extraterrestrial life.