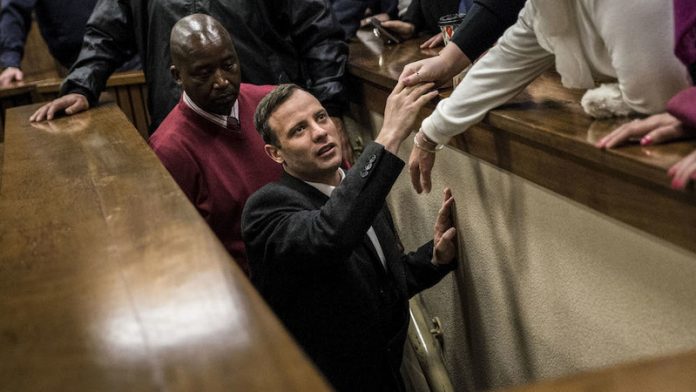 Barry Steenkamp said he stabs himself with his diabetic syringes so he can feel, in some small way, what his daughter Reeva felt on the night she died.

Slumped by the weight of his own grief when he testified in aggravation of sentence for Oscar Pistorius, he misconstrued a question from prosecutor Gerrie Nel about his daughter’s death – and revealed, powerfully, why he feels the need to hurt himself, why he is tortured by what he thinks his daughter went through.

“I believe there was an argument,” he began, before Nel stopped him.

The reason for the prosecutor’s interruption was that two courts had accepted that Pistorius did not have direct intent to murder Reeva. Although Pistorius had testified that he had believed she was an intruder, the appeal court did not accept that he had a rational or legal basis to fire four shots into his small toilet cubicle.

He must have known, they said, that whoever was behind the door would die. As appeal court Judge Eric Leach put it, that person ended up being “poor Reeva”.

But, whatever the evidence led, cross-examined, rejected or accepted, Barry Steenkamp believes his daughter died during a fight with her boyfriend, cowering in fear. He is not the only one.

This week, when she sentenced Pistorius to six years in jail, Masipa highlighted what she said was the “unfortunate misperception” that Reeva had died as the result of an argument. Unfortunate, she said, “because there is not a shred of evidence” to support it.

Those words are not going to change the minds of many people, including those who loved Reeva.

Regardless of Pistorius’s close neighbours confirming that he sounded like a woman when he screamed that morning, regardless of phone records showing that the state’s timeline of the shooting was physically impossible, people cannot accept that what happened that morning was not deliberate.

Part of the problem, arguably, is that Pistorius was such a poor witness. His lawyer Barry Roux would later argue that, heavily medicated and deeply depressed, Pistorius had reacted badly to Nel’s aggressive cross-examination – which included trying to force him to look at photographs of his girlfriend’s broken head. Neither Masipa nor the appeal court found Pistorius to be a reliable witness.

And then there was the sheer common sense stacked against Pistorius’s account of the shooting: Why did he not check to see where Reeva was? Why take such extreme action with little evidence of any real threat?

Pistorius’s legal team argued that he couldn’t simply be judged like everyone else – because he is not like everyone else. Roux urged the court not to see Pistorius as a superhuman athlete, but as a vulnerable, anxiety-ridden disabled man, who was terrified of falling victim to crime.

The court, ultimately, accepted this argument. But many crime-drenched South Africans cannot – and they are angry. Perhaps it is because they are so used to the terrible and violent pattern of rape, stalking, domestic violence and intimate femicide that it is difficult to accept that this case did not fit that mould.

Reeva had urged her friends to stand in support of murdered rape victim Anene Booysen and was vocal about women’s rights. She was going to speak to high school students about a previous emotionally abusive relationship on the morning she was killed.

The courts found that Reeva was not a victim of domestic violence, a decision that seems unlikely to affect how many people may depict her.

There is a gaping hole between how the legal system waded through the mess of evidence and how those outside court did. And there is great sadness in that.