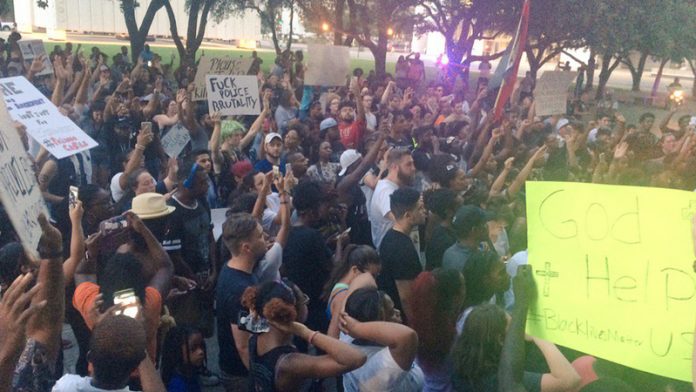 Dallas police were in a standoff with a suspect on Friday after snipers killed five officers and wounded six, one of the worst mass police shootings in recent US history, during protests against the killing of two black men by police this week.

Police had taken three people into custody after the shootings on Thursday night and a standoff with another in a downtown garage, where gunfire had been exchanged, extended into Friday morning, officials said.

No motive has been given for the ambush at a downtown protest, one of many held in major cities across the United States on Thursday. New York police made more than a dozen arrests on Thursday night, while protesters briefly shut down one of Chicago’s main arteries.

Dallas police chief David Brown said the shooters, some in elevated positions, used sniper rifles to fire at the officers in what appeared to be a co-ordinated attack.

“(They were) working together with rifles, triangulating at elevated positions in different points in the downtown area where the march ended up going,” Brown told a news conference.

A fifth officer has died after sniper shootings at a protest in downtown Dallas, police say. https://t.co/nUbf0wVlrO pic.twitter.com/barA4AYN5f

Police initially said four officers had been killed but the main union for Dallas police later reported that one of seven wounded officers had later died, taking the death toll to five.

“It has been a devastating night. We are sad to report a fifth officer has died,” Dallas police said on Twitter.

The shooting happened as otherwise largely peaceful protests unfolded around the United States after  the shooting of Philando Castile, 32, by police near St Paul, Minnesota, late on Wednesday. His girlfriend posted live video on the internet of the bloody scene minutes afterward, which was widely viewed.

The suspect in the standoff told police “the end is coming” and that more police were going to be hurt and killed. Brown said the suspect also told police “there are bombs all over the place in this garage and downtown.”

“This suspect we are negotiating with for the last 45 minutes has been exchanging with us and has not been very co-operative with the negotiations,” Brown said.

Police said they were questioning two occupants of a Mercedes they had pulled over after the vehicle sped off on a downtown street with a man who threw a camouflaged bag inside the back of the car. A woman was also taken into custody near the garage where the standoff was taking place.

“We are being very careful in our tactics so that we do not injure any of our officers or put them in harm’s way. We still don’t have a complete comfort level that we have all the suspects,” Brown said.

“Our worst nightmare has happened, he said. “It is a heartbreaking moment for the city of Dallas.” The Texan city is home to more than 7-million people.

Rawlings later visited the wounded at Parkland hospital, the same hospital where President John F Kennedy was taken after he was shot in Dallas in November 1963.

Television footage showed a heavy police presence, with officers taking cover behind vehicles on the street.

The use of force by police against African-Americans in cities from Ferguson, Missouri, to Baltimore and New York has sparked periodic and sometimes violent protests in the past two years and has spawned the Black Lives Matter movement.

Anger has intensified when the officers involved in such incidents have been acquitted in trials or not charged at all. – Reuters