Jo’burg’s Mai Mai muthi market is more than a place of trading, it’s home to many 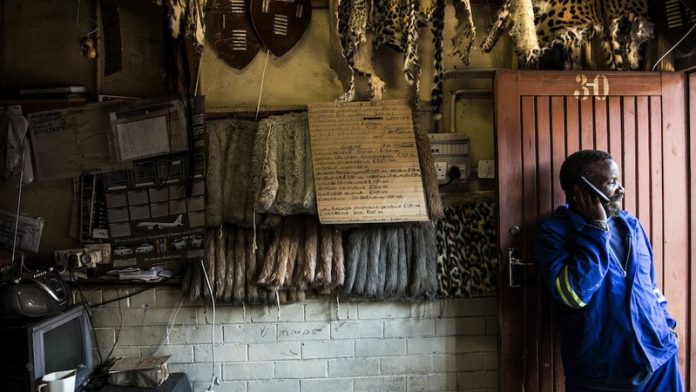 The history of kwaMai Mai Market is unknown but everyone agrees it is Johannesburg’s oldest market dedicated to traditional medicine. For the traders behind its old, red-brick walls it is more than a market; it is home, a place of love, life and spirituality.

KwaMai Mai has been the Phungula’s home for two generations. Their stall is close to the entrance on the corner of End and Anderson streets.

A highway offramp curves around the market. The Phungulas display their imvunulo (isiZulu traditional clothing) outside their stall in an effort to attract foot traffic.

Bab’Phungula sits on the floor, making amafahlawana out of cold drink can tops and bottle caps. The traditional ankle bracelets are usually worn for dancing. He collects the caps during long walks around the city. But when business is brisk he buys them from recyclers.

“Amafahlawana are used for ukusina [traditional dancing] and we used to make them from imifece [shells]. We would put grains of sand in them. But with technology and the scarcity of shells, we found other ways of making them.”

The explanation is punctured by glances at Mam’Phungula, who smiles and gives him her approval. Bab’Phungula is a second-generation kwaMai Mai trader, and took over the stall from his parents. Mam’Phungula lives in eMsinga in KwaZulu-Natal and tries her best to visit during school holidays, when their youngest daughter is free to travel.

Their love is a microcosm of the struggle of migrant workers separated from their families for decades. The two have lived between the two provinces for 32 years. But they make it work out of necessity. “I live here alone to provide for my family,” says Bab’Phungula.

Families thrive in the enclosed market. Next to the packed parking area, a group of young children are stacking cans on top of each other in an attempt to build the highest pyramid. Dithini, an indigenous game, is popular here where toys are rare. The furthest end of the market, wrapped inside the curving cement of an offramp, is home to the mechanics. The sun’s rays dance across the sweaty heads and bare backs of men while they hammer and weld.

The separate areas of kwaMai Mai are settled – traders know where to ply their craft. But what led to the formation of the market is still up for debate. The origin of its name is also not known. Some residents say it originates from the habit of an old mine manager, who would say “My My” when deceased miners were brought up to the surface.

Mduduzi Vilakazi, a committee member and leader in the market, says this is not true. “The area used to be a stable for horses. But as Johannesburg industrialised, many people complained about the stench of horses.” The land’s owner solved this by giving the space to traditional healers, who had previously operated from nearby Wemmer, where there is another muthi market known as Faraday.

Vilakazi thinks this history should mean that the market is considered a heritage site. This would allow its history – and the history of the people who have worked here – to be recorded. “It’s not fair that people refer to our culture and practices as something foreign. This is our spirituality and our traditions, and we must respect and honour them.”

This is borne out in the daily balance between tourists to whom they sell authentic Africana and people who live in the neighbourhood. Nkaberong Ndwandwe, the market’s elected induna and one of the inyangas (traditional healer), makes sure that kwaMai Mai is useful to its community and fulfils its original role as a one-stop-shop for people’s needs.

He came to Gauteng in 1980, looking for a job. But that search proved to be fruitless and in 1982 he was called to become an inyanga. He had learned some of his skills from his grandfather, who was also an inyanga, as a young boy and took these to kwaMai Mai in 1987.

“When I first got my calling I would have visions of the muthi that I need to use. I would then go find it and sometimes I would travel for weeks in the wilderness looking for specific muthi. My ancestors would guide me.”

Nearly two decades later that guiding hand means he helps countless people. A middle-aged couple comes in for a consultation, their shoulders bowed and their eyes fixed on the ground. They are looking for help for their 14-year-old son. He has a serious case of acne.

The husband explains this while Ndwandwe seems in deep thought, almost distracted to the point of not paying attention. But then he mixes different muthi in a small, clear, plastic bag and throws it to the ground. “Mix two teaspoons of this with boiling water and let it cool overnight. From tomorrow morning, he must drink half a glass.”

The wife takes out a small notebook and writes down the instructions. Her husband shuffles through his wallet for the R250 to pay Ndwandwe. This is placed on the bench next to the inyanga, with his head bowed and his left hand on his right elbow as a symbol of respect and honour.

When people cannot pay, Ndwandwe helps them for free. This is his home, and he says it carries his culture and remains a place where people can find their spiritual homes. “My ancestors are settled here. They have directed me here and this is where the spirits lie. I am just a vessel for them to work through. Until they tell me to leave I will not leave.”

Like so many others in kwaMai Mai Market, the inyanga has found a home.