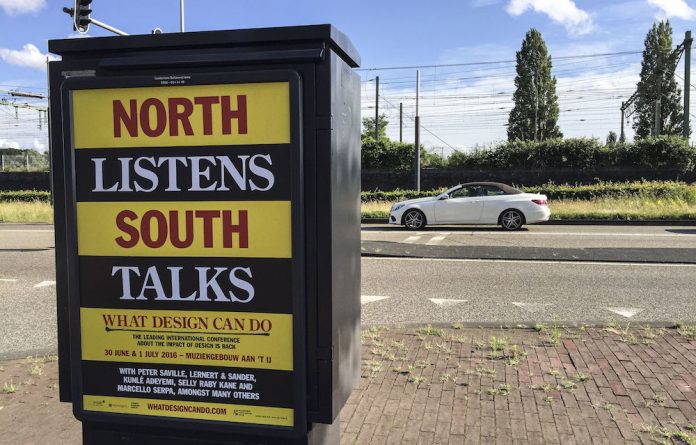 During the What Design Can Do conference held in Amsterdam last week, a young Australian architect named Will told me about his first trip to South Africa.

He worked on a water sanitation project in Diepsloot, offering new design solutions to old plumbing problems. He was a former United Nations Children’s Emergency Fund young ambassador, and his bright eyes and chipper tone were full of optimism about how design can change lives.

Will embodies exactly the kind of ethos that this Dutch design conference, now in its sixth year, wants to extend. It’s the kind of ethos paved with good intentions that holds that designers can solve tricky social problems, even wicked ones. The reality is that most of these projects are nothing more than short, feel-good assignments that pay little attention to design contributions from the people who will be using them.

This year the Dutch organisers of the conference announced a new theme, What Africa Can Do for Europe, with a publication of the same name. Despite its questionable wording (What Europe Can Learn from Africa would have been fine), the theme is meant to attract attention to African designs as models for thought among the European design community.

Considering Europe’s identity crisis after Brexit and the ongoing influx of refugees, the continent is particularly ripe for some inspiration from Africa.

Conference founder Richard van der Laken points out an issue facing both continents: “Europe and Africa have to deal with the same bullshit of being homogenised into one continent, flattening out the diversities that exist.

“The European creative scene needs to be surprised and fed with new ideas not only from Africa but also from India and Brazil.”

One part of What Design Can Do consisted of five talks from African creatives, curated by Ravi Naidoo, the founder of Design Indaba. His selection for the conference included Senegalese fashion designer Selly Raby Kane, Rwandan architect Christian Benimana and Kenyan technologist Juliana Rotich.

Apart from highlighting African design, the theme also brings into sharp focus some of the least glamorous narratives of the North-South design relationship.

Miriam Makeba once said: “The British often refer to Shaka Zulu as the black Napoleon, but I say Napoleon was a white Shaka.”

Her quip nails what is often ignored in design circles – that history is a matter of perspective. Look no further than the textbooks offered to South African industrial design students at tertiary level.

Put plainly, “there are no books written about African design history”, says Angus Campbell, the head of the industrial design department of the University of Johannesburg (UJ). Campbell says the design discourse is largely Eurocentric and, when the African voice is heard, “it tends to be curated through Western channels”.

The African Design Centre
The new African Design Centre for architects, designers and engineers in Kigali has a programme that draws inspiration from the Bauhaus School, as an example of experience-based learning and interdisciplinary education. After a stint lecturing in Kigali, Benimana joined MASS Design Group in 2008, a not-for-profit practice with offices in the United States and Rwanda.

MASS is also the founding member of the African Design Centre, scheduled to launch later this year.

Now with six years’ experience working in Rwanda, Malawi, Liberia and Gabon among others, Benimana is in a position to help train the next generation of African architects. Part of the centre’s discourse will be directed by MASS’s design philosophy, which hinges on building relationships.

Benimana says: “Engage people on the ground informally, in restaurants, in bars, at a football game. It’s the invisible connections that we don’t talk about that influence a project. You need to have an open mind towards everyone, even those considered unskilled,” he says.

MASS Design’s portfolio includes many projects with local building ele- ments. In the construction of the Gheskio cholera treatment centre in Haiti, MASS worked with Haitian metalworkers for the centre’s façade. For the Butaro district hospital in Rwanda they employed stone masons in part of the construction process.

Campbell shares with Benimana an aversion to ego. “In design, there is a lot of ego, selling and marketing oneself but design is actually about relationships. It’s about being humble enough to recognise that people who live in certain contexts have an incredible amount of knowledge that is not acknowledged through academic institutions but comes through life experience,” he says.

Collaboration is a word thrown around a lot at design conferences, often falling woefully short of its real definition of equal partnership. Most collaborations are nothing more than short-term assignments.

“A lot of design schools have these design and development programmes, and students come out for three weeks and they do a design research project, they live with the community and they design something and then go home and they have ‘changed lives’.

“Most of the time collaboration is used inappropriately and without consideration for where power actually resides,” says Campbell.

In an effort to decolonise the design curriculum, Campbell is involved in Izindaba Zokudla (Conversations About Food), an interdisciplinary project spearheaded by the department of development studies at UJ.

Like Benimana, Campbell tries to harness local knowledge, but in the context of design and technology for urban agriculture. The difference between the two is that Izindaba Zokudla views collaborators as self-organising.

At the heart of the initiative is a network of 150 Johannesburg urban farmers who meet biweekly to share knowledge about their best practices. Ideas are shared about topics such as raising small stock, recycling waste, growing feed and water harvesting. This is about design in a broader sense, extending beyond good-looking chairs and light fittings to include systems, tools and processes.

A project such as Izindaba Zokudla contrasts with most design conferences, which tend to place more emphasis on “rock star” designers.

Campbell says: “The design world tends to focus on people in the limelight and many big-name designers are good at keeping themselves in the limelight but these farmers are truly innovative citizen designers.”

Citizen design
What Africa Can Do for Europe might lie in more radical perspective shifts. According to Zahira Asmal, citizen-led design is part of that shift.

“Most people believe that it is the responsibility of governments to make their cities and that citizens should just slot in. But are we really leaving the reimagining of our cities to government?” she asks.

Asmal is the founder and managing director of Designing South Africa, a Cape Town-based enterprise. Her latest project is a public pavilion at Park Station in Johannesburg to welcome commuters to the city, which will be opened in December this year.

In part, Asmal’s public pavilion is based on an unsolicited approach to the mayor of the Johannesburg, Parks Tau. Asmal is an engaged person with an idea for the city.

Designed by Ghanaian-British architect David Adjaye, the pavilion is an impressive piece of city furniture. Towering timber columns and concrete base structures offer seating, a place for art installations and a breathing space for commuters.

The project is a collaboration between Designing South Africa, the City of Johannesburg (represented by the Johannesburg Development Agency) and the Passenger Rail Association of South Africa.

Park Station is one of the busiest transport nodes in Africa and 47% of Johannesburg’s population are migrants, many of whom travel through the station, according to Census 2011, and country-level data from the GCRO Quality of Life Survey 2013.

Asmal writes: “I have been a migrant in numerous cities across the globe; I know what it feels like to arrive in a big city and be bewildered. What if we were to mark the arrival to Jo’burg with a great statement of design, architecture, art – not big, but significant.”

Earlier this year, she extended the idea of citizen-led design. She proposed a partnership with the government-funded South African Cities Network, called Audience with the Mayor. This platform allows citizens with great ideas about public spaces to present them to their mayor, with the possibility that, like her project at Park Station, they become a reality.

Want to see a park in your neighbourhood? Have a better idea for how transport might function in your city? Want to see public space filled with art? Facilitated by Asmal’s company and the South African Cities Network, Audience with the Mayor invites all those with these ideas to the table. The initiative is to be launched in early 2017.