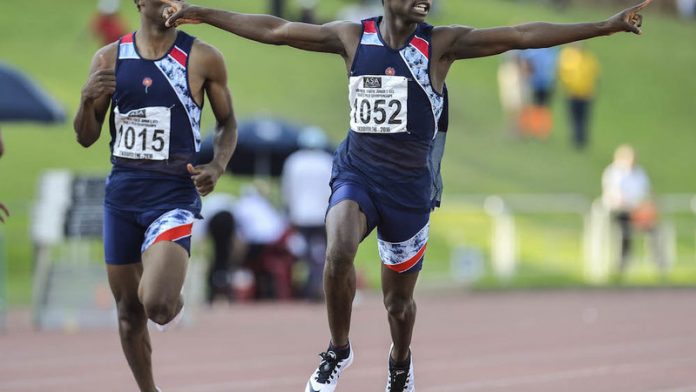 When sprinter Clarence Munyai was chosen for the Olympic squad on Thursday, his first call was to his coach, who couldn’t attend the announcement. He then phoned his mum, Vinolia, a domestic worker in Krugersdorp. “She was so happy,” says Munyai. “She also said that I was too young to be going to Rio.”

Munyai is 18, among the youngest-ever South African Olympians, and for many observers his selection is less significant than the intentions behind it. Munyai might just flash into the semi-final heats this time round but Rio is the dress rehearsal and his selection is a form of preparation for the 2020 Olympics in Tokyo.

It all started to take shape for Munyai three years ago when, as a 15-year-old, he started really growing while at HeronBridge College in Fourways. With increased strength came increased power – and speed.

Suddenly Munyai was beating fellow school sprinters and sprinters from other schools by ridiculous lengths. His talent was recognised and he was introduced to the in-house school and more intense training regime at Tukkies.

Despite being able to run like the wind, Munyai has other interests. He enjoys algebra, for example, and ultimately wants to become an architect. “I like designing,” he says. “One day I’d like to design my own house. As far as buildings I like are concerned, I like the Empire State Building.”

A couple of days after being selected for Rio, Munyai flew to Poland for the World Youth Championships, an arduous flight via Ethiopia and Austria to Bydgoszcz, a venue no one can pronounce the name of. There he will run his races and hone his skills, perhaps pinching him- self that his great adventure has only just begun.

In choosing the large team, the South African Sports Confederation and Olympic Committee has initiated a “can-do” philosophy that has been absent from other Olympic ventures, most notably from Beijing, eight years ago, when South Africa managed only one medal. This time round the team is as large as the stories of those within it, a rainbow selection from every corner of the country.

Take race walker Lebo Shange, for example, who watched that self-same Beijing Olympics on televi- sion. Seeing Jared Tallent, the Australian race-walker, prompted him to try walking, and so he taught himself competitive walking at the Chris Hani Stadium in Orange Farm outside Johannesburg; he donned his Converse sneakers, practised every day and so began his long walk to freedom.

In less than a month he will, in all likelihood, be racing against the man who inspired him to take up the sport in the first place.

Then there’s Jacob Maliekal, the only badminton player in the South African team. Maliekal hails originally from East London but currently finds himself at the Kawasaki headquarters in Shenzhen, China.

Kawasaki fund a badminton academy and it is from his Shenzhen base that he’s hoping to spring a few surprises at Rio. As he’s said publicly recently: “I’m not going to Rio just to make up the numbers.”

Or consider the fate of heavyweight pairs rower, Lawrence Brittain, who recently fought back from a rare form of lymph cancer to lodge his place in the Olympic rowing team. Lawrence, younger brother of Matthew and son of David, is just one rower in a group of five boats that have qualified for Rio, the most ever for South African crews in the history of the Games.

Rowing is in the Brittain blood. Matthew was part of the lightweight coxless fours who won gold in London in 2012, while David was the spare – or reserve – for a crew of four in Atlanta in 1996.

The family, in effect a rowing dynasty, has experienced all the heartbreak and the elation the gruelling sport has to offer. Let’s hope that it’s the latter rather than the for- mer for the battling Lawrence in a month’s time.

Injury saw the Olympic champion dubbed an underdog going into the race he won in record-breaking fashion in Rio. But it’s a position he knows well, and now he has an extra year to heal and train
Read more
Sport

Semenya's fight tells us much about how the world sees black women, especially as they compete for gold.
Read more
Sport

The 28-year-old Bett, the father of two-year-old twins, made his name at the World Athletics Championships in Beijing
Read more
Sport

Wayde van Niekerk's bid for a first world double since 1995 now turns to the 200m after he stormed to a comfortable victory in the 400m.
Read more
Advertising
Continue to the category
Politics