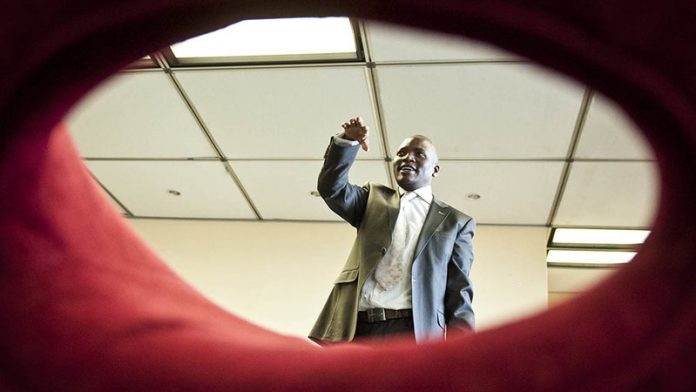 The SABC this week sacked eight journalists for disagreeing with a decision to censor coverage of protests, before the disciplinary cases against some of them had been concluded. Trade unions Solidarity and Bemawu intend taking their cases to court.

Read more:
The cult of Hlaudi Motsoeneng deepens with confidential deal with predecessor

In February 2014 public protector Thuli Madonsela released a report titled ‘When Governance and Ethics Fail’. She found that Motsoeneng’s irregular termination of the employment of senior employees had cost the broadcaster millions due to its “procedural and substantive injustices”.

Most of the cases were handled without following proper procedure. All 14 suspensions and terminations were successfully challenged in court and at the CCMA.

Madonsela recommended the SABC board take disciplinary action against Motsoeneng for misrepresenting his qualifications, abusing his power, and for the purging of senior staff.

The SABC has still not acted on Madonsela’s recommendations despite lengthy court processes.

Seven SABC reporters were fired this week. The eighth person dismissed was freelance journalist Vuyo Mvoko, whose contract was terminated.

It emerged earlier on Tuesday that the broadcaster had fired Busisiwe Ntuli, a specialist producer for investigative programme Special Assignment, and Lukhanyo Calata, an SABC journalist in Cape Town. Economics editor Thandeka Gqubule confirmed later that she had also been sacked.

Four others – Foeta Krige, Suna Venter, Krivani Pillay and Jacques Steenkamp – were informed of their axing on Monday.

‘Terminated with immediate effect’
Solidarity said on Monday that it wanted the suspensions of, and disciplinary action against, the SABC journalists set aside. This was pending its application to the Constitutional Court for direct access, so it could rule on the lawfulness of the SABC’s censorship instructions.

Krige, Venter, Pillay and Steenkamp would approach the Labour Court on Thursday, with Solidarity’s help. Media workers’ union Bemawu said its members, Ntuli and Calata, were also approaching the court.

“It has now become clear to the SABC that you have no intention to refrain from your conduct of undermining the SABC and the authority of its management. In the premise your continued acts of misconduct have become intolerable. Your employment with the SABC is thus terminated with immediate effect,” it reads.

Gqubule, Krige and Venter were served suspension letters after they disagreed with an instruction during a diary conference not to cover the Right2Know campaign’s protest against censorship at the SABC.

That protest was in response to Motsoeneng’s decision, announced in May, to stop airing footage of the destruction of property during protests. This caused outrage from civil society and media organisations.

Following this, the SABC charged Ntuli, Pillay, and Steenkamp for “liaising with the media” without authorisation. They wrote to Motsoeneng expressing their dissatisfaction with how operations had been managed at the SABC recently.

Calata joined a protest march outside the SABC’s offices in Cape Town earlier in the month.

The Independent Communications Authority of SA (Icasa) ruled on July 11 that the SABC had to withdraw its resolution to ban the broadcasting of violent protests.

Motsoeneng said after the ruling that no one could tell the SABC what to do and that they would challenge Icasa’s decision in court. – News24

The transport minister uses humour, which his targets don’t find funny, to survive in tough times or to divert attention from a problem.
Read more
Politics

Current ANC secretary-general Ace Magashule has been cleared of allegations that he misled the...
Read more
Business

The ruling party faces severe criticism over its reluctance to deal with leaders who are facing investigations, and its NEC is accused of selective morality
Read more
Politics

Gogo Dlamini, Themba Dlamini’s mother, died of Covid-19, but Mzanzi has a chance to rid the country of fraud and exploitation and instead serve ‘Gogo Dlamini’, the people of South Africa
Read more
Advertising