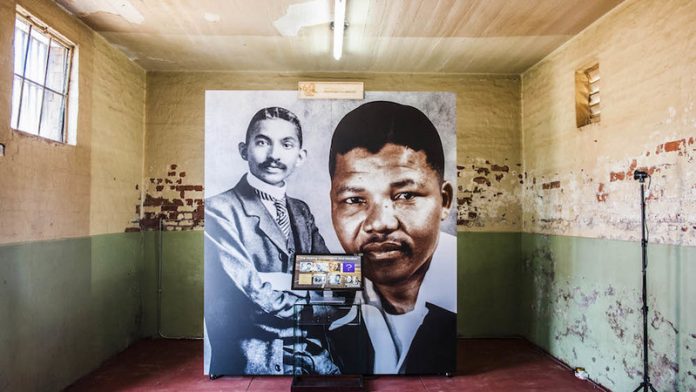 The Mandela Gandhi exhibition is a recently opened permanent show at Constitution Hill. It draws tenuous links between the two men, and may be the result of diplomacy, as it is partly funded by the high commission of India and the department of arts and culture and the department of international relations and co-operation. It is curated by Birad Yajnik, curator of the MandelaGandhi wall at the Nelson Mandela Foundation.

In an interview with CNBC Africa, Virendra Gupta, the high commissioner of India in South Africa, says of Gandhi and Mandela: “They left to us, people in South Africa, India, indeed the rest of the world, their message of peace and reconciliation, for nonviolence, and they told us that this is the only effective and enduring way to resolve our differences in this world.”

In parts, it excuses Gandhi’s separatist, caste systembased beliefs and asks us to forgive him as he was then the young “Mohandas yet to become the Mahatma”.

That the quote is attributed to Mandela is significant in that he appears to have been co-opted to sanitise the image of Gandhi. A selection of panels aims to suggest a trajectory, that Gandhi started out as a bigot who viewed blacks through the prism of the caste system and later evolved into someone who felt sympathy and friendship for the natives.

Considering the exhibition’s title, one would expect more equal representation of the two figures it refers to. Mandela’s only role is to spring to Gandhi’s defence, urging that his disdain for blacks be contextualised.

“All in all, Gandhi must be forgiven those prejudices and judged in the context of the time and the circumstances,” says Mandela in a panel addressing Gandhi’s incarceration in the Old Fort prison.

Arrested with a band of satyagrahis (advocates of nonviolent resistance) in 1908 and sentenced to the Old Fort prison’s Number Four section, Gandhi’s expectations were that the satyagrahis would be held with white people, or at the very least, separately. But as a panel titled Other Prisoners states, Gandhi is said to have later reflected on the folly of his ways, his evolving views becoming part of his learnings and autobiographical writings in The Story of My Experiments with Truth.

Adjacent paragraphs can help one trace the arc of Gandhi’s apparently softening stance. The change of tone in his comments such as “fondly imagining that we would have suitable quarters apart from the Natives” to “I am not aware of any general body of Indians having ever adopted an air of superiority towards their African brethren” took, according to the panels, a period of 20 years.

“If he did reform, by then he would have been in India,” says Ashwin Desai, co-author of The South African Gandhi: Stretcher-Bearer of Empire.

Desai, who wrote the book with Goolem Ahmed, says: “While he was here seeing the [Bambatha Rebellion] massacre that even Winston Churchill said was terrible, if he says something else later, then he is just airbrushing his own history. His role in the Bambatha Rebellion was to ensure that the empire’s interests were paramount. He was the empire’s soldier.”

The Bambatha Rebellion was started by the government’s imposition of a poll tax on black people in 1905. All males in Zululand, for example, were forced into the labour market. Desai writes in Business Day that Gandhi’s view, despite helping to treat Bambatha’s injured soldiers, was that the natives were unduly pampered by the British and thus had no inducement to self-improvement.

Desai writes that, in an editorial published in the Indian Opinion in 1905, titled The Relative Value of the Native and Indian to Natal, Gandhi argues that “the only way to improve the Zulu was to educate them or force them to work”.

Desai is of the opinion that the “one thing that joins Mandela and Gandhi together is that everybody appropriates them”. “When [India’s prime minister] Narendra Modi, who pays homage to the RSS [Rashtriya Swayamsevak Sangh, a right-wing movement], which was involved in the assassination of Gandhi, comes and pays homage in Gandhi’s Phoenix settlement, then you know that South African history has become bunk and a joke.”

Overall, what the exhibition seeks to achieve is something of a redemption for Mahatma Gandhi, by acknowledging his classist and racist behaviour while seeking to posit him as a constantly evolving man. But in doing so, there is a lot of glossing over the degree of Gandhi’s vitriol and the extent to which he sought to ingratiate himself with the empire so that classes of Indians could assimilate into it.

“In our research for the book, it astonished us not only the degree to which Gandhi stood apart from the general struggles of African people but often in the way he sought to stand against them,” says Desai.

“In almost all his writings, he could not bring himself to write about what was, at the time, one of the most cruel and insidious acts of dispossession happening in the early 1880s an 1900s.”

Desai argues that, if you look at Gandhi and Mandela’s histories closely, “the two men made their mark by pursuing two diametrically opposed political paths. But in the muddied waters of the present, Mandela is there to merely clean up the Mahatma’s mess.”

Reuben Phasha, a heritage, education and tourism manager at the Constitution Hill, says the moral of the exhibition is quite simple: “It focuses on the similarities between the two icons and mostly focuses on the positives. Both were held at Constitution Hill [when it was the Old Fort prison]. They lived their lives in different times but they followed similar paths.

“Mandela and Gandhi were both lawyers but both of their paths changed as they decided to fight peace and human rights.”

As Mandela is commemorated elsewhere at Constitution Hill, Phasha believes that, overall, Mandela is not subsumed by Gandhi’s narrative.

On Mandela appearing as Gandhi’s apologist, Phasha says a lot of people have different perspectives about who Gandhi was. “We decided to take an impartial stand at Constitution Hill. Exhibitions are there so that there can be discussions and we don’t believe we sugarcoated Gandhi’s history.”

Phasha says, depending on the audience, “the exhibition fulfils this mandate by often drawing strong reactions”.

Taking its cues from the dimming of the hope suggested by rainbowism, ‘A New Country’ attempts to articulate the depths of betrayal South Africans feel
Read more
Coronavirus

Fourteen days of quarantine in a Centurion hotel may be tedious, but for Kate Bartlett, there are plenty of laughs with new friends
Read more
Politics

The foundations of former Rivonia trialists reflect on the loyalty of the comrades who fought for democracy.
Read more
Politics

The Covid-19 pandemic is frightening, but it has also reminded us that we exist because of the care of other people
Read more
Advertising
Continue to the category
National