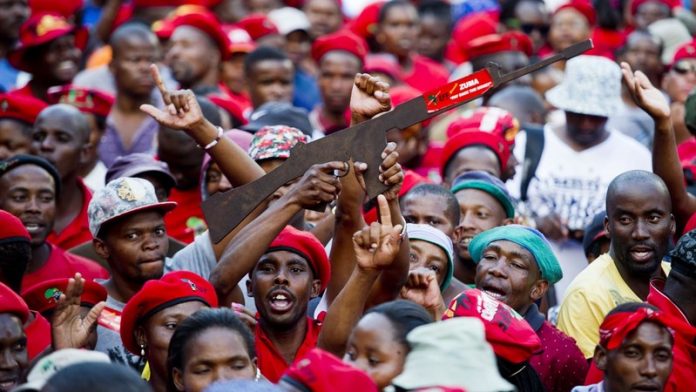 Five years ago Alex Gagiano discovered that a vacant plot opposite her home was being developed into a business that manufactures and sells equipment for the security and safety industry. She was not happy. She believed that the business, as she would later tell her Democratic Alliance ward councillor Heather Hart, was releasing harmful industrial chemicals into the residential area.

Hart did not share her concern, and the two ended up in a dispute that followed a fairly normal progression: first they sparred over e-mail, then later in meetings of the Edenvale Community Policing Forum (ECPF), and eventually they were trading insults in the quiet suburban streets of Edenvale.

But it was a surprise when Gagiano learnt, via a visit from the police, that she could be investigated for illegally trading in weapons thanks to a DA question in Parliament.

The allegations made against the business opposite her home were dismissed by the town council in a tribunal in 2011. It had obtained a license to assemble electronic parts, the council found, but no industrial manufacturing takes place on the premises.

Gagiano continued in a bitter dispute with the DA representatives in her ward, particularly Hart, arguing they were not fulfilling their mandate to address issues in the community. Potholes, for instance. Those give criminals a chance to strike at drivers and passengers, stranded in the suburb after a car was damaged by a collision with a hole in the road, Gagiano said.

Hart maintains that Gagiano was just a sore loser.

“The business was cleared; Mrs. Carlyle did not like the outcome of the tribunal hearing and she has vowed that she will destroy the DA in Edenvale,” Hart told the Mail & Guardian via email, referring to Gagiano by her maiden name.

The battle between the two continued to intensify until a startling visitor appeared outside Gagiano’s gate about a month and a half ago. He said he was with the police.

“He was an absolute gentleman. He came in, introduced himself, and then sat down and told me what was happening,” Gagiano says.

It was then that she learnt her visitor was not only from the police, but with the Hawks, and was there because her name had come up in Parliament.

She still uses her maiden name formally, which includes online advertising for her husband’s gun companies. “Guntree” is the Gumtree of guns, and its where Gagiano posts second-hand guns her husband has available for sale. She maintains that the sales are done through her husband’s businesses, which are licensed to sell guns, and the online posts are her way of helping him find interested people.

But DA MP Mike Waters didn’t see it that way. In March 2016 Waters asked the Minister of Police in Parliament “whether the seller of the 19 firearms (name and details furnished) has a licence to sell such weapons” and if she had a license to own a Norinco variant of the AK-47, which requires a special license.

Gagiano is contemplating packing up and leaving Edenvale for good. She claims she broke no laws by advertising guns where the transactions would be made through her husband’s licensed companies, and says that even though her family has a legacy of being DA supporters, she will no longer vote DA. He shares a similar sentiment, she says.

Waters told the M&G that the DA would not press forward on charges regarding the sale of illegal guns, as it was now in the Minister of Police’s hands. But Gagiano has begun drawing papers to take the party to court on defamation charges. “I’m gatvol,” she says.