A Kenyan police officer turned a gun on his own, apparently in the name of al-Shabab 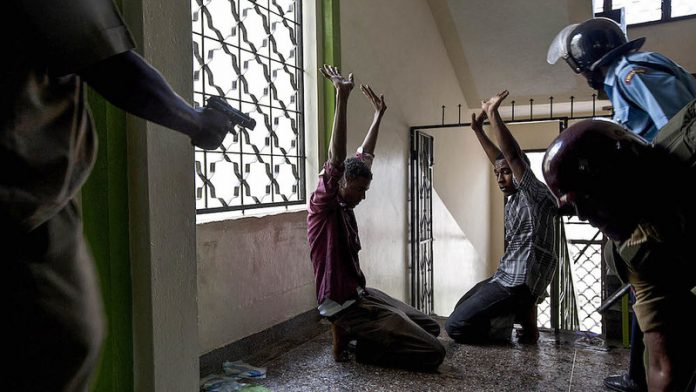 When Abdihakim Maslah turned his gun on six of his colleagues in Kapenguria earlier this month, his actions aroused fears in Kenya over the politicisation of the security system.

Maslah, based in western Kenya, had graduated from the police college in Kiganjo in 2013. He had been on the police’s radar for the past few months because his behaviour had raised concerns. There were claims that huge chunks of money from an unknown source were being paid into his bank account.

On this particular Thursday in July, he walked into the station on a mission to free his friend, an al-Shabab suspect. Omar Okwaki Eumod, a teacher at the Victoria Primary School, had been arrested on suspicion that he was recruiting people into the militia group and was due to appear in court that morning. Schoolchildren had reported him to the police after they came across reading material among his belongings.

The police officer, wearing a turban that covered his face, walked into the station at 5am. He and a colleague scuffled when he was caught trying to open the cell where the teacher was held. He shot his colleague, killing him instantly. Other police officers who responded to the sound of the gunfire were killed when Maslah took up a sniper position, shooting everyone approaching the scene.

The International Crisis Group warned in 2014 that “reckless police action has become a deepening concern and could radicalise Kenyans, Somalis and Muslims in general”.

The report recommended that the country needs to reform its internal security services, stating: “What is presently on display is an incoherent system that weakens national security.”

This overhaul has not happened.

Among the dead were seven security officers, including a special forces officer, and Maslah’s immediate boss, Vitalis Ochidi.

The country has suffered a string of grenade attacks, believed to be the work of al-Shabab, since Kenya began its military incursion into Somalia in October 2011.

Many Kenyans have blamed the police and the Kenyan intelligence services for ignoring the warning signs. They believe the state’s inability to curb these attacks gives the militia group more time to manoeuvre.

Police officers, who spoke on condition of anonymity, claimed that al-Shabab had approached them on several occasions.

“They … offered me $10 000, with the promise of relocation to Somalia and assurance that my family will be safe. They also promised to cater for all my travel and monthly expenses if I agreed to join them,” said one officer, adding that six of his colleagues had joined the militia in the past two years.

At another station, an officer claimed the group had resorted to threats when officers refused to join them.

“I have text messages from the group saying they will come for me and my family for refusing to be part of them. I have no one to report to since I cannot trust the ones who I work with, as many of them are still living in fear of them,” added the source.

Interior Cabinet Secretary Joseph Nkaissery has launched an initiative seeking to curb radicalisation in the country. “We want to know the cause of the problem before it gets out of hand,” he said.

Despite former president Mwai Kibaki signing into power the Prevention of Terrorist Act in 2012, which gives law enforcers more power to fight terror groups, Kenya has experienced an increase in attacks since the United States embassy bombing in 1998.

The Act stipulates that anyone found engaging in deadly terror activities will be imprisoned for life, while activities that do not result in loss of life will attract jail terms of up to 30 years.

Security analyst Richard Tutah pointed out the poor remuneration of the police and security officers as the main reason they are an easy target for the militia.

“Many of them are poorly paid, with low allowances, and they live in one-room houses that cannot even accommodate their families. Many have developed a ‘don’t care’ attitude, citing that the government does not give them proper attention and the respect they deserve.

“This has made them accept any positive attention they get, including being honoured by the militia,” he said, calling for an overhaul of the security system.

“The government has been doing more recruitment, with over 20 000 people being included in the force in the last two years in a bid to combat terrorism in the country, but has not been doing any background checks on the people it is putting in the system. I fear that criminals could take advantage of the recruitment exercise, especially since people can buy their way into the system,” Tutah said. – M&G Africa