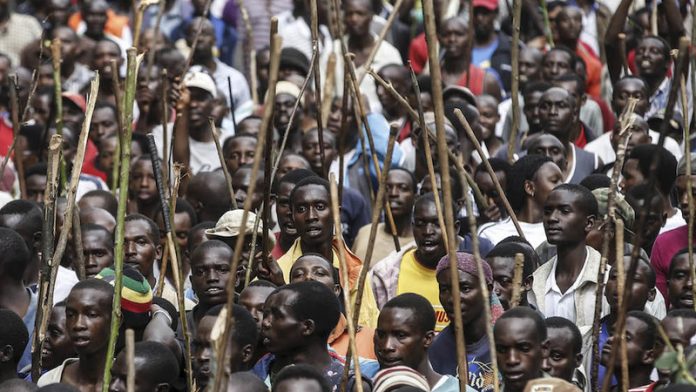 European lawmakers have launched a campaign to stop Burundi becoming a beneficiary of a free trade agreement between the European Union and the East African Community (EAC) because of human rights violations in that country.

Should the campaign to exclude Bujumbura from signing the trade deal suceed, it would boost economic sanctions against the regime of President Pierre Nkurunziza.

European aid to Burundi remains suspended on the grounds that Nkurunziza’s third term violates principles of democracy and that violence in the country and the actions of the security forces amount to gross violation of human rights, which does not qualify Burundi to benefit from trade.

The European Parliament lawmakers travelled to Nairobi over the past week for talks with top Kenyan trade officials in search of an alternative to the Economic Partnership Agreement (EPA).

The EU is looking for alternatives that would allow Kenya to continue trading with the bloc because it is the only East African Community country at risk of paying higher export taxes to the European market if a deal extending the duty-free benefits is not extended by October.

Bernd Lange, chairperson of the European Parliament’s international trade committee, said the possibility of having no agreement between the EU and the EAC could “hurt trade”.

The lawmakers want Burundi excluded from the trade agreement, but doing so will hurt the interest of Kenyan exporters of farm produce to the European market.

Kenya is willing to sign the EPA, but neighbouring Tanzania, which has also been negotiating the deal with the EU, insists it will not sign the trade agreement because of the outcome of the British referendum to exit the European Union.

“This is not our favourite,” Lange said, regretting the possibility of excluding Burundi and Tanzania holding out on the deal. “The clear approach is to give a push to Tanzania and to try to improve the situation in Burundi and bring the country back on the path to democracy.”

During their visit to Nairobi, a member of the Brussels-based Parliament, Marie Arena, said although the East African countries had problems with Tanzania agreeing to sign the agreement, the EU members also had a problem with Burundi being party to the deal because of the sanctions against its leaders.

“We have a big problem with Burundi,” Arena said. “The EU Parliament has procedures to have sanctions on Burundi. It is difficult for us to vote on an agreement with countries under EU sanctions … We are not sure Tanzania will change and we are not sure Nkurunziza will change by October 10 2016. We cannot play with the Kenyan economy.”

Kenyan exporters are likely to be hit by the unexpected consequences of Brexit. Tanzania argues that it took part in the EPA negotiations since 2004 with the expectation that Britain was part of the EU. The exit of the EU alters the equation.

Audace Ndayizeye, president of the Federal Chamber of Commerce and Industry in Burundi, said the EU had no “reason to exclude Burundi” from the EPA.

“We need to have a thorough analysis to resolve this issue. Tanzania has decided not to sign. The EU had not anticipated Britain could get out of the EU. This is the reason we need a thorough assessment. The EPA should be signed as a bloc. We are prepared to have further dialogue,” Ndayizeye said.

“That is politics. The EU has frozen financial aid with Burundi. They wanted dialogue to start. The dialogue has started. They have no reason to exclude Burundi. Their own businesses have not stopped doing business with Burundi. The SN Brussels (airline) is still flying to Bujumbura. They are still trading with Burundi. Business is win-win,” Ndayizeye said.

The situation in Burundi and Tanzania’s refusal to sign the trade deal has plunged the East African region’s trade diplomacy into a quagmire. The EU lawmakers proposed that, should the impasse persist, Kenya should consider seeking an alternative to the EPA through the EU’s generalised system of preferences, which allows developing countries access to the EU market duty-free.

Kenya’s foreign minister Amina Mohamed said the problem would be resolved “in no time” and an agreement would be signed before the October deadline. She said Nairobi had no immediate plans to apply for any extension of the export window to the EU: “We are talking EPA, EPA, EPA.”

Kenyan farmers, who exported flowers worth US$650-million in 2015, are at risk of losing their tax-free access to the European market unless EPA negotiations lead to the signing of a lasting deal in September.

The five members of the EAC – Burundi, Kenya, Rwanda, Uganda and Tanzania – have been holding negotiations on the new terms of trade to replace the current trade pact between Africa and Europe under the Cotonou Agreement, which allows African states tax-free access to the European market. South Sudan, which was recently admitted into the EAC, was not party to the trade negotiations.

Burundi exports 26% of local produce to the EU, with Belgium-Luxembourg raking in $47.8-million of the $148-million worth of Burundi’s exports in 2014 compared with $733-million spent on imports, according to available statistics.

OnJune 20, the EU Council cleared the provisional signature of the EPA between the EU and the EAC.

The campaigners say allowing Burundi to be part of the EU-EAC deal amounts to revamped economic support for that country. – M&G Africa

The conflation of human rights violations and a pandemic leave the most vulnerable marginalised. Equitable and democratic societies are needed to fight against this
Read more
Advertising