I was invited to join Zuma on campaign trail – Marius Fransman 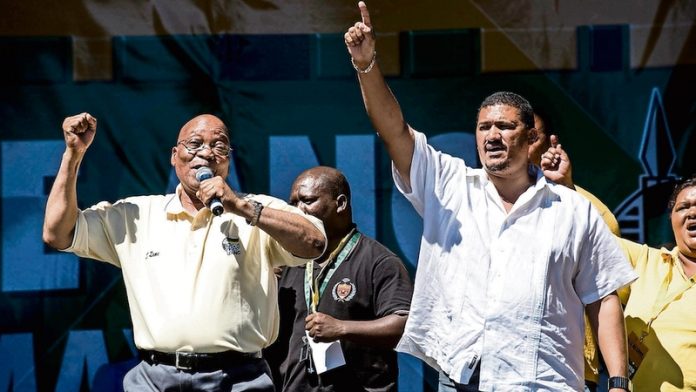 He was criticised after being photographed shaking hands and taking a selfie with Zuma while campaigning in Philippi last Thursday.

It was the first ANC event he attended after stepping aside as the ANC’s Western Cape leader in January, while the National Prosecuting Authority and the party investigated sexual harassment allegations against him.

In an affidavit signed on Monday, Fransman said that after announcing his intention to return to office, “I received an invitation to join President Jacob Zuma on the campaign trail.

“This to my mind was an indication that the first respondent [ANC secretary general Gwede Mantashe] and the organisation appreciated that there was no valid suspension in place.”

Fransman was asked on Wednesday about who invited him.

“As a member of the provincial parliament [legislature], we get requests from the elections office, that we all need to be in the area where deployment happens,” he said.

“It is a general invitation for all leadership of parliament when members are around.”

He told News24 that the invitation as such was not relevant.

“The issue is that I am on the campaign. As the ANC leader I don’t have to wait for any invite.”

Fransman’s affidavit formed part of a court application to get a copy of the ANC integrity commission’s report on the sexual harassment allegations. He was successful in this part of the application on Wednesday.

The court would hear argument on Friday as to why it should reaffirm his position as provincial ANC leader.

Fransman said Mantashe never responded to a recent letter in which he declared the end of his voluntary leave of absence. He had also not been told he could not resume preparing for the upcoming local elections.

It was no secret that he had joined the campaign trail with Zuma, his affidavit stated.

The ANC’s head of elections, Nomvula Mokonyane, said on Thursday that Fransman was back in his job. On Monday, Mantashe insisted that Fransman had not been reinstated and that Mokonyane had been under pressure when she made the announcement.

Fransman said he had a meeting with provincial officials before Mokonyane’s announcement.

“Khaya Magaxa, the deputy chair of the ANC in the Western Cape, welcomed me back publicly before the masses in Philippi and Khayelitsha on Thursday as the provincial chairman,” he stated.

He said ANC spokesperson Zizi Kodwa’s announcement on Thursday that he had not been reinstated was unexpected.

Fransman said in the affidavit, “Kodwa’s statement could only have been incited by the first respondent [Mantashe]… it is shocking that this was done during the election campaign since it contradicted the President’s public demonstration.”

“This indicated to the public that there is a complete breakdown in communication within the organisation as well as factional infighting.”

Fransman faced disciplinary proceedings after he was accused of sexually harassing 21-year-old Louisa Wynand while they were travelling to the party’s January 8 celebrations in Rustenburg.

In May, North West prosecutors decided not to proceed with the sexual harassment case, due to insufficient evidence. The matter was subsequently sent to the Northern Cape’s Director of Public Prosecutions, who had sent the docket back to the investigating officer with queries. – News24