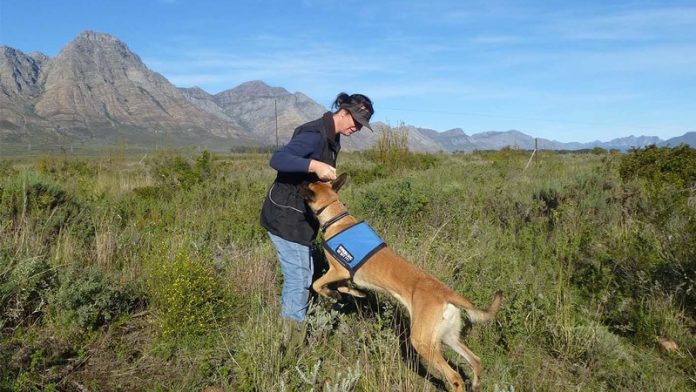 As part of its on-going work CapeNature has taken up the preservation of the critically endangered geometric tortoise, one of the three most endangered tortoises in the world.

Due to the tortoises’ nature — they have very good camouflage, are mostly sedentary and vary in size — they have been hard to find and quantify. Add to this human bias (they’re not top of the media-friendly conservation lists), plus human “search fatigue” and it was evident a new approach was needed to help monitor the species.

Under the direction of Cape Nature’s former scientific manager, Guy Palmer, and in collaboration with the current ecological co-ordinator, Vicki Hudson, the Conservation Detection Dog Team was developed.

“They had done research trials in America,” says Hudson. “ And following a traditional fire extraction in which there were a lot of casualties, we realised we needed another approach. I have a history in sports dogs and I started doing research, putting a report together. That was in 2012.”

Today, CapeNature employs two dogs in the team. The dogs are Malinois, a breed akin to the German Shepherd that has historically been bred for detection work.

“Only one in 2 000 dogs are suitable,” says Hudson. “It’s a very special dog, working in a special environment. Training may start off quite similar to narcotics or explosive detection, but here, we’re working with live target detection in a dynamic environment. Not only is there a lot of ground to cover, but the environment is filled with many other things that are very interesting — from rodents to more humans — and the dogs need to remain focused. Also, they have to want to keep doing the searches day in, day out for up to nine years.

“It takes about three to six months to train them up,” she says. “And I can only teach them up to a certain point; I can teach them what the target is and where it shall it be, but the tortoise has been evolving since the dinosaurs and has a way of evading predators, including four-legged canines.”

Nevertheless the dogs are very efficient at their jobs. Using their intricately developed senses (air scenting, ears and eyes) to track their targets, even tortoises as small as 2cm have been found.

The contribution this project has made to decreasing environmental impact, reducing the ecological footprint and improving biodiversity conservation and management is extraordinary.

As evidence, in a 2013 search and rescue effort, one tortoise was found per dog, per hour. That’s comparable to one tortoise per 6.4hrs search time and 0.7 tortoises found per human. It’s a marked increase in success rate and a 75% cost saving.