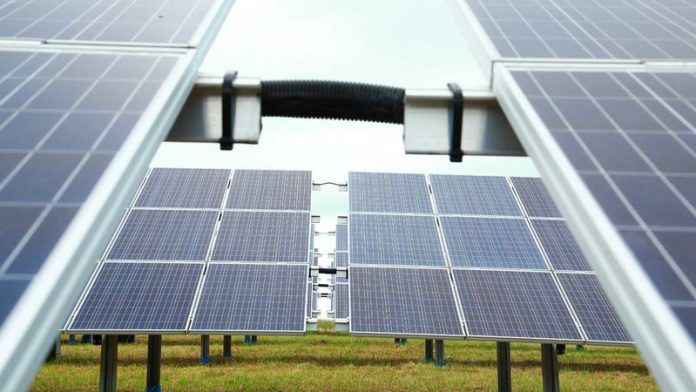 Theoretically, how does an airport justify its carbon footprint? Airports Company South Africa (Acsa) has gone beyond justification and is implementing and running a completely new system — solar power-driven airports.

As of February 2016, George Airport became the first African airport to run solar; 41% of the airport’s energy demand is now supplied by this form of energy, with the balance drawn from the national grid.

Speaking at the launch of the photovoltaic (PV) plant converting solar energy in George, Skhumbuzo Macozoma, chairperson of Acsa, said: “Harnessing solar power is a viable, cleaner energy source, which contributes towards diversifying the energy mix.

“This plant will ensure that the airport is self-sustaining in terms of its power needs and will eventually extend to the broader community within the George municipality.”

The solar station at George took a mere six months to build and in May 2016, Kimberley Airport and Upington International Airport were also converted to solar. These plants are forecasted to produce approximately 927 000 kilowatt hours per year.

Additionally, jobs were created during the build process. For the George Airport, 16 new employees were trained to install, operate and maintain the PV plant. During the 24-week construction period of the Kimberley plant, five permanent and 26 temporary employment opportunities were created.

Port Elizabeth, East London and Bram Fischer solar plants will follow in the next few years.

Energy-efficient management extends across the group and includes the replacement of lights with energy savers or LEDs on runways, and for lighting outdoor security and parking areas. Cape Town International Airport, Port Elizabeth International Airport and George Airport currently recycle water through a groundwater filtration system and water harvesting tanks.

Additionally, each airport has a comprehensive wildlife management plan that covers every aspect of the airport relating to the risk of bird and wildlife strikes, including detailed species lists, and behaviour and mitigation strategies. The use of night-vision camera traps has resulted in the identification of various nocturnal species that were subsequently captured and relocated to controlled environments in conjunction with local conservation organisations.

Acsa chief executive Bongani Maseko says: “The interconnection between us and the external environment is the core of our value creation. We are always on the lookout for opportunities to develop cleaner energy sources that also aid us in our cost-cutting efforts, as well as lessen[ing] the pressure of power demand on the national grid.”

Through the change to solar at these three airports, about 247 713 kilowatt hours per month per airport has been taken off the grid, which alleviates national energy constraints. Beyond 2025, the company’s objective is to be a carbon-neutral organisation.