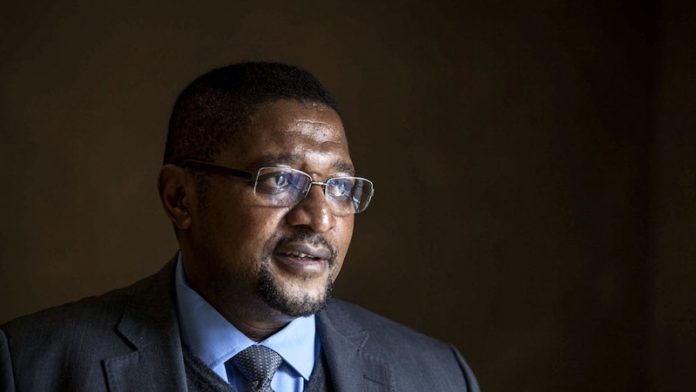 Are you worried that the increase in the number of political killings might result in the local government elections not being free and fair?

We are on record that we condemn any form of violence related to the elections. We are appealing to all stakeholders, political parties, leaders and members of political parties, supporters and candidates not to engage in violent acts.

We are a constitutional democracy. The rule of law is critical. Nobody should lose their lives because of the elections and nobody should take anyone’s life. Those offences are criminal and are receiving the full attention of the security cluster.

Second, the electoral commission is working very closely with the key stakeholders in making sure that we defuse any conflicts before they spread further. We’ve seen that there have been incidents where there’s been social unrest because of matters related to service delivery and we have seen social unrest due to the demarcation outcome.

And we have now seen violence and killings that are related to a contestation of candidate lists. All those are unacceptable in a democracy and that’s what we condemn.

Are you becoming frustrated with the conduct of political parties going into this year’s local government elections?

No. We condemn [violent] incidents. There is no evidence on the table at the moment that says [the violence is the responsibility of] a political party. It could be an individual belonging to a political party.

Political parties have also come out and condemned this. You heard prominent members of the community coming out to condemn this phenomenon. We are not frustrated as a commission. We are just saying it’s important that we understand that there is no room for violence in a constitutional democracy.

Are you not worried that the IEC’s decision to disqualify the National Freedom Party (NFP) from participating in the upcoming elections might fuel existing tensions?

We find no joy that the NFP was disqualified due to its [own] internal administrative mishaps. Unfortunately, we have to meet the prescript of the law.

The NFP commands almost 50% support in KZN [KwaZulu-Natal]. However, the rule of law stands. Any other action would have been challenged and this would have plunged the country into a constitutional crisis because you have to conduct and finish the election within a certain period.

What will happen if the Constitutional Court rules in the NFP’s favour and says it must be allowed to participate?

We will cross that bridge when we get there. As we speak right now, ballot papers are being printed and distributed, and so that will present a major challenge from a technical point of view. But I don’t want to discuss it because it’s sub judice.

ANC secretary general Gwede Mantashe says the continued attacks against the IEC by opposition parties and political observers is an attempt to delegitimise the outcome of elections. Do you agree?

I am not sure if I can say there are continued attacks on the IEC. What we have seen is the vibrancy and colourfulness of the politics and I think we, as a commission, must have a thick skin to understand the politics.

But where we had concerns, we’ve had engagement with political parties and we emerged with a mutual understanding. In recent times, all political parties have primarily focused on campaigning. The issue of the IEC has been off the table.

Do you think the Constitutional Court judgement, which found that the elections in Tlokwe were not free and fair, damaged the integrity of the IEC?

No. In by-elections, if a person is brought in from another voting district to come and register that causes what you call vote staking.

So, it happens with by-elections where … people from neighbouring areas are brought in to come and pump up the numbers for a particular candidate.

But the measures that are now in place are that voters have to give us their physical address, and we can no longer take it for granted that, since you are registered in the area and you were registered before, there was a requirement of the address.

Remember the voters’ roll was compiled in 1998. Eighteen million people were [eligible to vote] at that time [and] the law did not require a [voter’s] address. The amendment then came in 2003. At the time we were going to court, we were sitting with 24-million [eligible voters].

Now we have 26-million people on the voters’ roll. What the court has said now is that, going forward, we must get addresses. But it accepted that this was a much more intricate and complicated matter than perhaps even our media understood it.

You had people who were already registered and registered lawfully. Now, to disenfranchise a person because of their address was the issue that we felt we should take to the Constitutional Court to seek clarity. There were different interpretations. Interestingly, if you look at the ConCourt decision – there were three judgments in one.

This was not a simple issue as it was made out to be. Where we are sitting now, if you don’t have an address you now must supply us with [the applicable form], which is like an affidavit that confirms that this is where you live. If anybody proves that you have lied, that can attract up to five years [imprisonment] because that is a fraudulent act. It’s a criminal offence.

The Tlokwe matter is a slight distortion. It was around the issue of interpretation. We now all have the same interpretation because the Concourt is the final authority.

Has there been any political interference in the IEC?

No, not that I know of. We had interactions with political parties through the political liaison structures at national, provincial and local levels.

However, we have engaged all the political parties individually where we sat down and discussed their issues and concerns, and made schedules of those matters as commissioners. Besides, how would you interfere because the commissioners and the management don’t conduct elections? We [just] manage the logistics strategically.

The people who conduct elections are the 240 000 ordinary South African citizens who are brought in for five to 10 days and trained to conduct the elections.

For anyone who wants to interfere, you will have to get the collusion of all those 240 000 people. It doesn’t take one to be a genius to see that that’s not possible.

Did you get the job because you are President Zuma’s man?

Why don’t we ask the same questions about all those companies that have worked with a particular government department?

So I am not sure what that question means. The process of my selection was a rigorous process that was chaired by the chief justice of the Constitutional Court. We have applauded his many decisions before. Why now are there questions about Mashinini?

In our Constitution, there are two things that are required for a person to be eligible [to hold this job] – they have to be a South African citizen and secondly not be an office bearer of a political party. I’m a South African citizen with extensive experience nationally and internationally in the field of elections and I’m not an office bearer of any political party.