​#SliceofLife: Erin Marney bends it like Beckham on the Under 11 soccer field 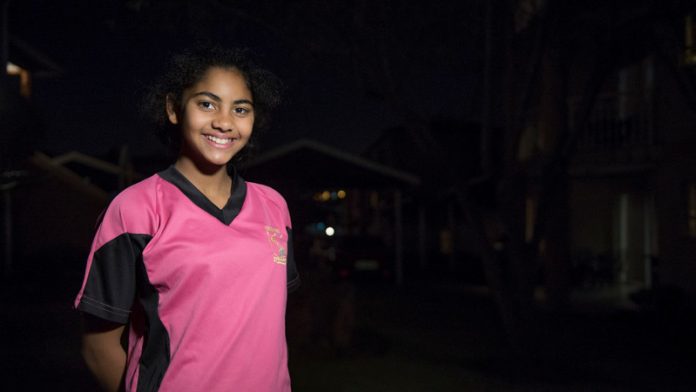 It was prize-giving night at my school and we were told that our soccer team had to attend. I knew that meant we were going to get something – an award or maybe a certificate – I was not really sure what it would be.

We were all in our school uniforms and our teacher made us sit in order. I was a little nervous, but excited. I have been playing soccer for four years now.

I know that I am good, I work hard at my skills. Not only do I practise at school, but I also practise at home with my dad.

The teacher called us up one by one and when my turn came, I got even more nervous. I went up to my teacher and took my award. I was very proud of myself.

It’s not easy playing soccer when you are a girl. It means that some kids at school will say silly things, especially the boys. They have teased me about playing soccer. They say things like “girls can’t play soccer”.

I laugh at them because I can, and the other girls on my team can as well, and I could beat some of them. They are just jealous that girls can do the same things they can.

One boy asked me why I don’t play netball like other girls. I told him I don’t like netball. There are too many squares and too many rules about how you can move your feet.

Getting an award with my team makes it all worth it; we are strong.

After getting my award I went back to my seat and kept looking at it. While my teammates and I were still celebrating our award, I heard my name being called up again.

“The best player in the Under 11 soccer team is Erin Marney.”

For a second there I couldn’t believe it, then I remembered how much work I put it. Of course I was the best player. I play for myself and nobody else. – Erin Marney (12), as told to Pontsho Pilane