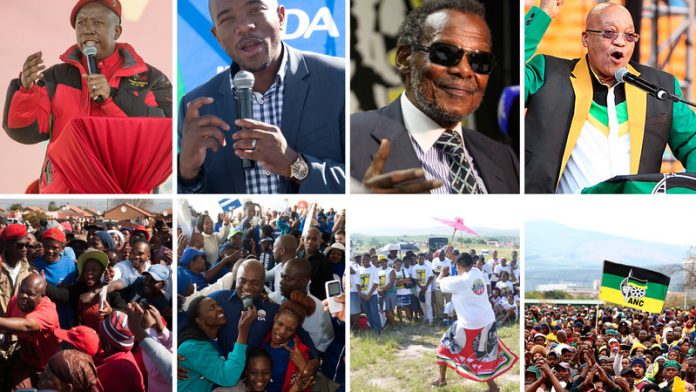 South Africans go to the polls tomorrow to elect new local governments. The country’s three main parties held rallies at the weekend in a final effort to sweep up support.

The party leaders made claims that raised eyebrows, however. Readers asked us to look into statements by the leaders of the ANC and the DA, President Jacob Zuma and Mmusi Maimane. We also evaluated a promise by EFF leader Julius Malema that made news headlines.

President Jacob Zuma made this claim in one of Johannesburg’s stadiums.

South Africa’s most recent nationally representative survey on service delivery is the 2016 Community Survey, released earlier this month. It shows that 89.1% of households in the country has access to piped water. The rest relies on rivers, streams, boreholes, rainwater tanks or other sources of water.

To find the figure for 1994 is trickier. As we’ve reported before, the earliest data that Statistics South Africa has is the 1995 October Household Survey, which found that 78.5% of households had access to clean water then.

However, the agency’s manager of service delivery statistics, Niël Roux, told Africa Check at the time that the particular survey was “hamstrung by a series of methodological and practical issues” so the data isn’t often used today.

A smaller nationally representative survey, carried out by the Southern Africa Labour Development Research Unit (SALDRU) in late 1993 and early 1994, found that 76.4% of households had access to piped water. Professor Ingrid Woolard, currently with SALDRU, told Africa Check previously that this survey was “fairly reliable, but it was a small survey – less than 9,000 households – so there will be some margin of error”.

The earliest credible data source from Stats SA is considered the 1996 Census, which found that 60,7% of households had access to piped water in their dwelling or yard, with 20,8% using public taps, for a total of 81.5%.

Claim: “In Midvaal… unemployment is half of what it is for the rest of Gauteng.”

The leader of the DA, Mmusi Maimane, said this at the party’s final election rally in Dobsonville on Saturday.

When Africa Check fact-checked the DA’s national election manifesto, we found they were correct in claiming that Midvaal had the lowest unemployment rate in Gauteng. This applies to both the narrow definition of unemployment (counting people actively looking for work) – at 18.8% – and the expanded one (including people who’ve given up looking for a job), at 25.5%.

The rates are based on Census 2011 data which contains the most recent unemployment data available for municipalities, Monet Durieux from the labour statistics unit at Stats SA told Africa Check.

However, with Gauteng’s corresponding figures at 26.3% (narrow) and 32.8% (broad), unemployment in Midvaal is not half of what it is in the rest of the province.

Verdict: Not within a municipality’s power

Speaking at the Peter Mokaba stadium in Polokwane on Sunday, Economic Freedom Fighters’ leader Julius Malema made this claim about his party’s commitment to increasing social welfare grants.

“Absolutely not,” said Dr Andrew Siddle, a researcher focusing on local government based at the Graduate School of Business at the University of Cape Town. He explained that the only way municipalities can assist the poor is with their Indigent Policies. The Municipal Indigent Policy is intended to guide the national initiative to improve the lives of poor people and to improve access to free basic services (water, electricity and sanitation).

Read More: How the manifestos stack up