Thabo Mbeki meets ANC candidates but refuses to endorse anyone 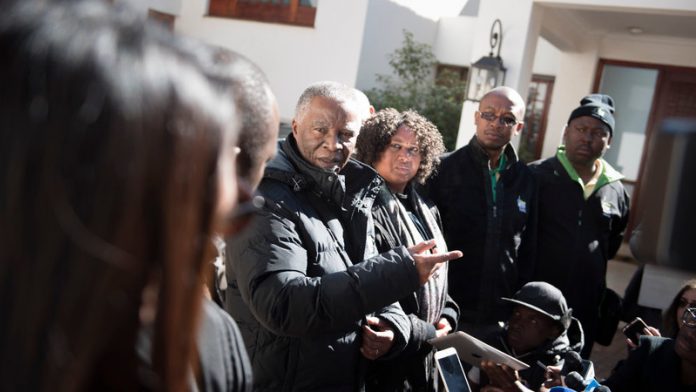 “I will vote,” said former president Thabo Mbeki to an audience of journalists in the parking lot of his Killarney house. “But that’s a secret ballot.”

No amount of leading questions from the press pack could get Mbeki to say anything about his thinking on where other voters should put their cross on Wednesday 8.

What wasn’t secret, however, was the yellow and green ANC logo on his black winter jacket.

The statement came after an hour-long meeting with Parks Tau, the ANC’s mayoral candidate for Johannesburg. It is Tau’s second visit to Mbeki’s house in recent months. The candidates for Ekurhuleni and Tshwane were also supposed to attend the Tuesday morning meeting, but the ANC said they had to attend to “last-minute emergency work”.

Mbeki’s vote has been the focus of a great deal of speculation, with various parties vying for his endorsement. He has already met with the Democratic Alliance’s Mmusi Maimane, and on Monday met with Economic Freedom Fighters’ leader Julius Malema. The two shared tea at Mbeki’s house, and posed for photographs in his sitting room.

There was also no statement of allegiance from Mbeki forthcoming at that meeting. But the EFF used their time in the former president’s house to emphasise the fact that Mbeki had not campaigned for the ruling party. He did not, however, wear any red clothing.

Malema told reporters he had talked up the merits of his party: “We are leaving here confident that the issues raised with him will convince him to do the right thing on August 3.”

Speaking after his meeting with Tau on Tuesday, Mbeki said his meeting with the EFF was nothing special and that people should not read into it. “The EFF asked to meet me. I meet anyone who asks.”

His message was rather one of encouragement for people to vote – a far cry from the days when he would actively campaign for voters to pick the ANC. Speaking as “a resident” of Ward 73, he said the “legitimacy of candidates” depended on a good turnout in local elections. “The task remains for us — the voters — to do our bit.”

For his part, Tau would also not be drawn into speculation about why Mbeki would not actively campaigning for the ANC. Instead, he talked up the party’s chances of keeping power in the hotly contested Johannesburg metro.

ANC secretary general Gwede Mantashe responded to news of the EFF’s visit yesterday by saying people are free to meet anyone they want. “Our approach to leadership is that we can meet anyone and we must not stop them from meeting everybody.”

The Mail & Guardian reported last month that Mbeki had decided not to campaign for the party he once led. Senior ANC and government officials told the M&G: “His reasons for [not] campaigning are simple. One is the blatant corruption that continues undermining state institutions, which he believes are reversing the gains made since 1994.”

“Second, he has still not forgiven the ANC for the manner in which he was treated when the party recalled him in 2008.”

The focus on Mbeki comes after Kgalema Motlanthe — the only other post-1994 president still alive — did an extensive interview with City Press on Sunday. In this, he said: “It’s almost as though the country is running on autopilot.”

“In the past, the ANC always prided itself on relying on superior argument. Now, it’s numbers they rely on.”