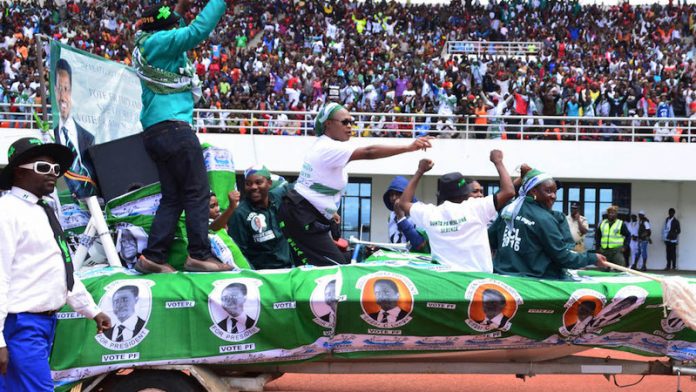 Zambia goes to the polls on Thursday in what promises to be one of the most tightly contested and high-stakes elections in the country in decades.

Historically, the country has conducted largely peaceful elections and it is the only country in the Southern African Development Community that has achieved a democratic transfer of power to an opposition party twice since independence. But the political climate in this election is very different and recent incidents have raised concerns that the polls might not be free and fair.

The closure of The Post, Zambia’s only independent newspaper, rising political violence, controversies over the printing of ballot papers and the cancellation of opposition rallies are just some of the incidents that have sparked concern. For a country that has traditionally been one of Africa’s most stable and politically mature democracies, this is worrying.

The election will be significant for several reasons. Not only will it face the usual tensions between momentum and incumbency, populism and pragmatism, and rural and urban regions, it will also need to navigate a new electoral system from one in which the winner was the first past the post to the 50-plus-one approach.

And they will also be voting in a referendum about the Bill of Rights.

The incumbent Patriotic Front (PF), which has been in power for only one term, is pulling out all the stops to maintain its grip on power. In the past, incumbents have largely lost elections because of complacency. But, with a closely fought by-election in 2015 still fresh in people’s memory, this will not be a factor for the PF, which is well aware that it faces a real and tangible threat to its rule.

In the same vein, the United Party for National Development (UPND), and its flag-bearer Hakainde Hichilema, know that this is its best and probably final chance to win an election after almost two decades of trying.

With the stakes being so high, some regressive political behaviour has taken place on both sides, increasing tensions in the country.

Political theatre has been a strong feature of these elections. Rather than a focus on ideologies, manifestos or policies, personality politics and creative campaigning strategies have assumed centre stage. The PF has launched a simple but effective “point” campaign, derived from the Bemba word sonta. It urges voters to “point” to what the PF has delivered, with specific reference to the party’s infrastructure roll-out in rural areas.

Not to be outdone, the UPND’s innovative “watermelon” campaign has been gaining traction among the electorate. This campaign slogan encourages voters to “act” green (PF) on the outside but, once in a voting booth, to vote red (UPND) to ensure they are not intimidated by supporters of the ruling party.

Having been in opposition for the past 19 years, the UPND realised that a change of tactics was needed. Hichilema roped in a controversial but charismatic businessperson, “GBM” Geoffrey Bwalya Mwamba, as his running mate to address the perception that he is aloof and out of touch with the masses, and to shore up popular appeal in areas where the party has traditionally struggled.

The PF is also banking on personality politics. President Edgar Lungu’s humility and approachability is seen to be major drawcard for voters, which the PF hopes will deliver it Lusaka and the Copper Belt, regions that are pivotal to electoral success.

Finally, the political musical chairs that have been played in recent months have reinforced the feeling that this election is less about policy than it is about personality. Former president Rupiah Banda, who had his presidential immunity removed by the PF government in the aftermath of the 2011 elections, has lent his weight to the party that displaced him, and Guy Scott, a stalwart of the PF and former vice-president, is now actively campaigning against the party he helped to found and, instead, is endorsing Hichilema.

In addition, the former ruling party, the Movement for Multi-Party Democracy (MMD), has now split, with one faction realigning itself with the opposition and the other with the PF. This has added another layer to the political intrigue.

The domestic and international communities will be scrutinising the polls and keeping a close watch to see what ensues afterwards. The prospect of disputed results, the resulting contestation by political parties, a protracted court process and potential violence has political and economic implications.

The Electoral Commission of Zambia (ECZ) has three days in which to declare the results, after which parties have 21 days to lodge their appeals. A run-off, if required, needs to be called within 37 days of the election results being made public.

The election results will probably be contested, and the question then becomes whether this will happen in the courts or on the streets.

In the event of a challenge, it is conceivable that a winner could be confirmed only by the end of September, creating a period of political uncertainty. The biggest consequence would be policy inertia, which will affect several economic issues, including the fiscus, the currency, inflation and growth.

Interestingly, the economy has been far less an issue in political campaigning than might have been expected, despite the country suffering from power outages, rampant inflation, acute fiscal pressures and stresses in its mining sector. This is largely because International Monetary Fund assistance after the election is seen as inevitable, regardless of the outcome.

What is clear is that this election will go down to the wire. With so much at stake and campaigning reaching fever pitch, the coming days and weeks will be critical in determining Zambia’s future course.

Although the country’s political maturity and nonviolent history have raised hopes that any spike in risk after the election will be short-lived, the possibility of uncharacteristically high levels of violence in the aftermath of the election and a prolonged period of uncertainty remains high.

On the other hand, a speedy resolution of the electoral outcome will allow policymakers to give urgent attention to repairing the economy. Regardless of the outcome, the need for tough policy decisions and structural reforms is non-negotiable.