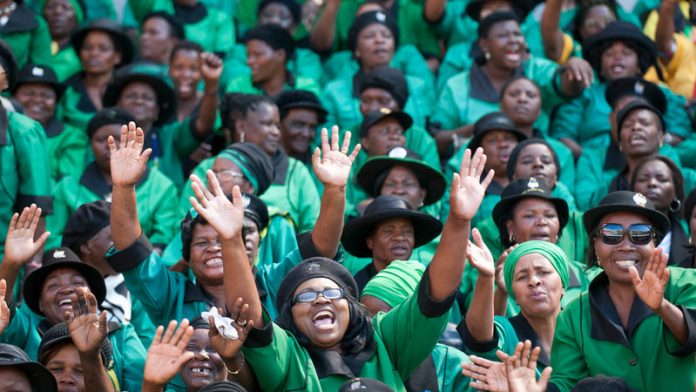 Three events converge in August in South Africa: the 60th anniversary of the march by women to the Union Buildings; the finalisation of the local government elections; and the tenth anniversary of the trial of President Jacob Zuma for rape. They act as a prism, refracting South Africa’s politics of gender, its uneven legacies and its ambiguous futures.

The recent municipal elections do not show that political parties consider women’s issues relevant or important. Sixty years after women marched on Pretoria and 22 years after the first democratic elections there are no visible champions of women’s rights. In fact, the gains that have been made risk being rolled back.

Progress from 1956 to democracy
The first moment of women’s mass political mobilisation as women was through the Federation of South African Women (Fedsaw), inaugurated in 1954 with the adoption of the Women’s Charter. Fedsaw organised its first national protest against the extension of the hated passes – identity documents used to control the movement of black people during apartheid – to black women in 1955. But it is the protest march of August 9 1956 for which they are justly honoured.

Political repression led to Fedsaw’s dissipation in the early 1960s, but its memory inspired the 1994 Women’s Charter for Effective Equality. This was the fruit of the Women’s National Coalition – the second moment of South African women’s widespread mobilisation, made possible by the transition to democracy.

This moment yielded important gains. Some of these included:

These measures advanced women’s status in important ways. They also attempted to improve the position of black women, and those living under customary law in particular.

The women’s vote
The 2015 South African Social Attitudes Survey showed women were less satisfied with the country’s political leadership. Whether these attitudes influenced local government election outcomes is a matter of speculation. No data are available providing a gender-disaggregated breakdown either of registered voters, or those who actually voted.

Through their choice of political representatives, or the content of their manifestos, political parties certainly did not give the impression that there was a “women’s vote” to influence.

Half of all municipal councils’ seats in local government elections are ward councillor seats. The remaining seats are calculated proportional to the party’s representation.

It is argued that including more women in policymaking processes will better promote women’s rights and interests. But whether this goal can be accomplished depends significantly on the extent to which gender is substantively embedded in parties’ manifestos.

Neither the DA nor the EFF made specific reference to women and gender equality in their election manifestos. The ANC for its part proposed no more than what was already in place. This is prioritising women’s inclusion within the Expanded Public Works Programme and consultation with stakeholders around the problem of violence against women.

Jacob Zuma’s rape trial
Gender featured only weakly in the recent elections. It took the silent protest, #RememberKhwezi, at the Independent Electoral Commission to dramatically reinsert these questions of women’s absence into the heart of our politics.

In 2005 “Khwezi”, whose father had been a close friend of Zuma’s in exile, accused Zuma of rape. When the trial began in 2006 it shattered the idea that women share the same agenda, priorities or interests. The trial pitted largely urban, feminist women’s rights activists against largely rural, traditional women. It also saw the ANC Women’s League remain silent on the threats against Khwezi, and the phallic, aggressive masculinity the trial celebrated.

Precisely how this masculinity was to be understood, and what its place was within the politics of the ANC, was a central feature of the later controversy surrounding Brett Murray’s painting, “The Spear”. These questions surfaced yet again when ANC politician Marius Fransman, accused of sexually assaulting Louisa Wynand earlier this year, electioneered alongside Zuma.

The ANC’s once undeniable commitment to gender equality is now a withered imitation of its former self. Yet the DA and EFF provide little in the way of an alternative.

The DA’s particular brand of liberalism has proved impervious to feminist ideals. In addition, the marriage between feminism and socialism – including the EFF’s version of choice, Marxist-Leninism – has never been a happy one. A strong commitment to practising gender equality seems unlikely in this context.

However, the EFF demonstrates commitment to women’s representation. Yet female EFF leaders, who are powerful and articulate individuals in their own right, play second fiddle to the party’s male national leadership. The DA does not support gender quotas but has produced Patricia de Lille (originally of the Pan Africanist Congress and the Independent Democrats), Helen Zille, Lindiwe Mazibuko and Phumzile van Damme.

There are lessons to reflect on in South Africa’s Women’s Month. The country’s past tells us that, under certain conditions, women mobilise in ways that produce significant political results. Our present shows how easily these gains can evaporate. And our future urges us to look within the unfamiliar political spaces created by the contradictions of the present to forge new practices of gender equality.

The lockdown has interrupted public consultations on ward demarcations, while 37 by-elections around the country are on hold
Read more
Opinion

ANC in Gauteng: For whom does the electorate toll?

With two years before the next local government election and an ANC in Gauteng already on notice, the stakes have never been higher.
Read more
Politics

DA unravels the progress it has made

DA KZN strategy moves past taking on ‘the man from Nkandla’