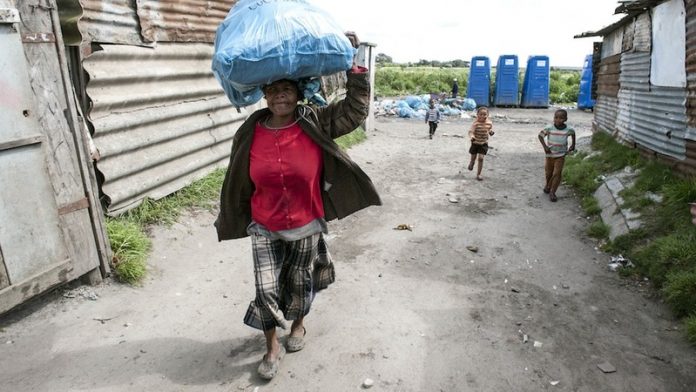 One of the ugliest and most enduring myths of social-democratic societies is the idea of the welfare sponger, the benefits cheat. Or, if you like your prejudices steeped in misogynoir, you might call these people black welfare queens.

The basic premise of this stereotype is there is an underclass of people who abuse the welfare system by finding loopholes to lead lives of idleness on the taxpayer’s money.

The way this myth is perpetuated is by finding one example and applying it to every welfare recipient. If you have ever had the misfortune of watching Fox News, you’ll know about this.

Study after study has shown that welfare is a social safety net that helps to keep hundreds of millions of people around the world from death by starvation, and that benefits cheats are statistically insignificant.

In South Africa, the benefits of the welfare system are seen in the shift of the number of black people living in absolute poverty since 1994. The School of Economics at the University of Cape Town has shown that the size of the older person’s grant, for example, has been sufficient to lift many households out of the poorest quintile.

According to the Goldman Sachs 20-year evaluation of South Africa, published in 2013, the number of black people living below the poverty line (or on less than R515 a month) in 1993 was 70%. In 2008, that number was 61%. This was largely thanks to government spending on social safety nets.

Chop up the numbers any way you like, the result is the same. Or as the report put it: “The … increased social spend on social protection, housing and education from 29.3% in 1993 to 46.3% in 2014 of total budget allocation is reflective of changing priorities geared towards human development and a larger focus on narrowing the poverty gap.”

Whatever else has gone wrong in South Africa, we have lifted millions of people out of abject poverty.

The Centre for Social Development in Africa at the University of Johannesburg says that child grants, which overwhelmingly go to women, “enhances women’s power and control over household decision-making in financial matters, general household spending and in relation to child wellbeing”.

Welfare is the wages that each and every economically active citizen of this country has to pay for the historical sin of apartheid. The test for eligibility is economic. It ought to be that.

Enter our very own welfare queen buster, Western Cape Premier and professional troll Helen Zille. In a recent speech given at a Women’s Day event, she posited the idea, dripping as it was with caveats, of giving out bursaries to any woman who finishes high school without ever claiming a child support grant. “It will be a massive incentive,” she said.

It would be wildly controversial for several reasons, and not just because it excludes men, in spite of the fact that they can and do claim child support grants.

Last year, the Msinga municipality in KwaZulu-Natal reaped a rich harvest of criticism from all quarters, including the Democratic Alliance, for doing exactly that: giving out bursaries to young women deemed to be virgins.

I believe a court would find this scheme objectionable for several other reasons, including the restriction on women who may have needed to claim child support for reasons outside of their control.

The real possibility that she may have been raped leaps to mind. The scourge of HIV means that too many households today are headed by children.

What if a young woman needs to claim because she’s raising her siblings by herself? Why would you want to design a bursary scheme that excludes poor young women raising a child? It is almost as if it is purposefully designed to demonise the most vulnerable.

Zille’s qualifier, that this would be a “massive incentive”, is instructive. She seems to believe that people on child grants are motivated by a perverse order of incentives; that the provision of a child grant is an incentive for teen pregnancy. This is Ronald Reagan’s “welfare queen” dressed in the sheen of liberal concern.

Even a cursory glance at socioeconomic reports shows that poverty, unemployment and inequality have the effect of removing power, agency and choice from the poorest and most vulnerable, who are women.

A final thought: Zille will never have the opportunity to implement this idea. I realise that “columnist condemns Zille’s latest nonsense” is becoming something of a cliché, and perhaps we ought to start contextualising her tweets and far-right invectives against the real power that she has.

She is no longer the leader of the growing opposition. Poor Mmusi Maimane was forced to deny reports in June that he wasn’t really in charge of the DA precisely because of his predecessor’s unhelpful outbursts. Isn’t it time we believed him?