Zambia votes: The ‘political contest has never been this fierce’ say analysts 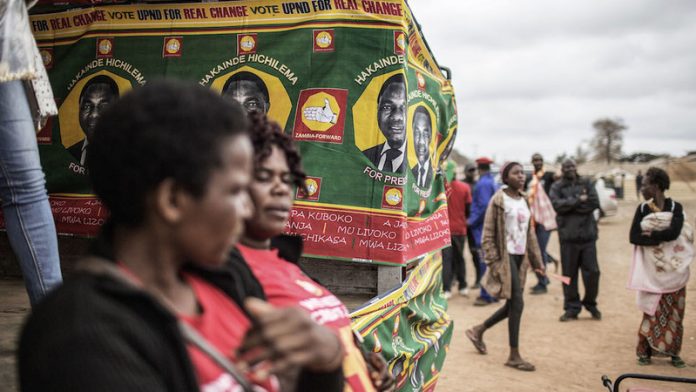 Informal currency trader Jabulani Lungu thinks Zambia’s ruling Patriotic Front has had its chance, and he hoped this week’s general elections will bring in a new party to steer the economy out of a slump.

Like many other Zambians, Lungu (no relative of President Edgar Lungu) is worried about rising food and transport costs, unemployment, chronic electricity shortages and a violent campaign in one of Africa’s most peaceful countries.

“The main issue in these elections is the economy,” the 31-year-old said before Thursday’s vote for a new president, vice-president, mayors and councillors. “The kwacha has lost value and businesses are finding it hard to survive. There is also too much corruption, which we see every day on the streets. If we are seeing corruption on the streets, what more is in government offices?”

The kwacha fell more than 2% in value on Monday as data showed China’s demand for copper had slumped 14% in July.

Zambia is Africa’s second-biggest producer of copper, the mainstay of its economy.

With prices near six-year lows, mining companies have closed mines and cut thousands of jobs. Consequently, the economy grew only 3.6% in 2015 compared with a target of 7%, according to the Bank of Zambia.

The central bank said it expected growth to edge up to 3.7% this year. Inflation, meanwhile, is running at more than 20% a year.

Zambia is in talks with the International Monetary Fund about a possible financing deal, after conceding its budget deficit, which has averaged 4.8% of gross domestic product in the past two years, was unsustainable.

“Zambia is facing its worst economic crisis in more than 10 years … The political contest has never been this fierce,” the South Africa-based Institute for Security Studies said in a note on the election.

The opposition United Party for National Development (UPND) hopes to tap into this frustration, as the country grapples with the effect of a balance of payments shortfall caused by diminishing demand for copper.

President Lungu is a former lawyer who narrowly beat Hichilema in a vote early last year to replace Michael Sata, who died in office in October 2014.

“I think this government has tried its best. President Lungu was elected when Zambia’s economy was under severe stress,” said Stanley Mulenga (26), a street vendor who sells clothes on Lusaka’s bustling Cairo Road. “We need to give the current government more time to improve things.”

The pre-election period has been marred by violence, forcing the Electoral Commission of Zambia to impose a 10-day ban on campaigning in some parts of the country.

The UPND accused the commission of manipulating last year’s election results in favour of Lungu — a charge it rejected — and says this week’s vote will not be free and fair. Police blocked several of its rallies.

Analysts predicted the result could be even closer than it was in 2015, when Lungu scraped through with 48.3% of the vote compared with 46.7% for Hichilema.

The opposition scored a political point this week when Zambia’s Constitutional Court ruled that Cabinet ministers were in breach of the law by remaining in office after Parliament was dissolved in May.

“The ruling adds credence to the opposition’s allegations that the ruling administration has been trying to push its incumbency advantage, partly by using state resources for campaigning,” said Bjorn Dahlin van Wees, Africa analyst at the Economist Intelligence Unit.

“This will mar the credibility of the vote and a disputed outcome is highly likely, raising tensions further.” — Reuters