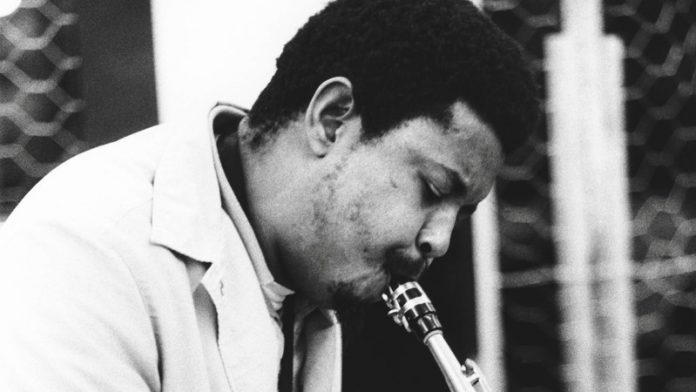 For the revered South African musical spiritualist and icon, Bheki Mseleku, an event as modest as an unveiling and tribute concert could only be pregnant with symbolism of his continued presence. As if to mirror the arc of Mseleku’s musical career, the event held in his honour started with the slow trickle of the invited parties at the Merebank Muslim Cemetery before an untimely ending as the lights at the University of KwaZulu-Natal (UKZN) Centre for Jazz cut mid-song, forcing us to consider Mseleku’s sudden passage into the next world.

The lights cut out just as musicologist and tenor saxophonist Salim Washington, a member of the day’s tribute band led by Nduduzo Makhathini, said something of the drama of the tune Violet Flame (from the album Beauty of Sunrise), by way of introduction. The band initially lumbered through it, caught off-guard by the sudden darkness before steeling themselves. The added concentration of having to trust each other, and not the transcribed charts, brought a verve and human touch to the rendition.

The incident was perhaps fitting, for Mseleku was nothing if not a fiercely gifted yet gently souled autodidact. Those who knew the maestro say lying in a “resting place” as eclectic Merebank Muslim Cemetery, with its Muslim, Hindu and Christian deceased honoured or forgotten beneath, is fitting for a man who evaded neat boxes, especially where weighty matters of spirit were concerned.

Like many an exiled South African luminary, Mseleku, a prodigious multi-instrumentalist who made his most serious mark on the piano, died penniless; in his case in a lonely hovel of a council flat in London. His discography of six diverse albums is bookended by titles (Celebration and Home At Last) that speak not only to the concerns and hope of the exile, but to a reimagining of physical limits.

Mseleku, who would have turned 61 this year, was honoured by a few committed friends, disciples and family members through poetry, monographs and music. The event was modest, elevated by the level of jazz on show and the lasting recollections from those who knew him in varying degrees. These recollections, ranging from single, fleeting encounters to a life spent supporting him — rendered him a saintly, fallible and volatile human being.

A fuller perspective of the man was enhanced by the contributions of family members. His daughter, by means of a video message from the United Kingdom, contradicted the image of Mseleku as an unrelenting ascetic. “He was really friendly, really funny. It was always fun to go out with dad, he liked nice things, going to nice places and dressing nicely.”

Duma, Nomvula Ndlazilwana and Mseleku’s son remembered his father as his very own Mr Miyagi: “Like, ‘Dad why are we doing this?’ ‘No no no no no, you’ll figure this out later.’ He did leave a lot of sage knowledge about trying to be as close as possible to what it is that you were born to do.”

Rafs Mayet, perhaps South Africa’s most luminary jazz photographer, speaks not in dates but as he photographs: respectfully but captivatingly.

His image of Mseleku, etched in his mind, is as he first saw him when they were teenagers in the Durban memory bank that is Curries Fountain Stadium. Mseleku was stretching the possibilities of a Farfisa organ, taking a solo as a member of the Lamontville Expressions.

“He played with his elbows, his toes, his nose, his tongue,” says Mayet, recalling a young Mseleku in rock ’n roll mode. Despite the suggestion of showiness, Mayet, who would later become a roadie for later Mseleku projects such as The Drive and jazz-fusion outfit Spirits Rejoice, says Mseleku was never about the limelight. “He was always complementary to others, but he was always full of music and doing different things it.”

Born in a three-roomed house in Lamontville that Cambridge-trained musicologist William Mseleku shared with his wife Ma Zuma, children and additional family, Mseleku quit school before high school, preferring the open-ended nature of music to the mores of academic life. Childhood friend Vusi Mchunu says the vibe of the time was the Durban underground sound, an ebullient mix of Zulu guitar meeting the psychedelic rock of the hippy era. Bands such as Purple Haze in KwaMashu, Black Magic in Clermont and the Lamontville Expressions were among a host of other townships groups giving voice to this style.

“How Bheki got into the bands was because he was always hanging around, carrying bags, and playing at every opportunity,” says Mchunu. “In fact, he told me how he got to play for Lamontville Expressions. The keyboard player was missing at the time of the gig. They put him in as a stand in and that’s how he started getting into music.”

The signposting of Mseleku’s pre-jazz foundations is key, for he carried these traces through a stellar oeuvre until his last offering, Home At Last.

Recalling an encounter at the Cape Town International Jazz Festival, after Mseleku had released Home At Last, Mchunu says the musician asked him: “Usuyizwile, mfwethu? Siyagroova ke manje, [Have you heard it, my brother? We’re grooving now],” referring to the groove-oriented Durban sound.

The Tennessee-born Washington, who began playing jazz in Detroit, says that even in the jazz idiom, Mseleku was a genre breaker. “He expressed himself in traditional ways and non-traditional ways. That the man is virtuoso is clear, but he is identifiably South African within that sound. But more than many South African jazz artists, he is the one that understands the African-American aesthetic in the most complete way. He has done it in a way that combines both aesthetics. Mseleku absorbed [Thelonious] Monk, absorbed McCoy Tyner, he absorbed Bud Powell and made it Mseleku.”

While imbibing Monk, Mseleku, lived more or less like an actual monk, with the craft of music making inseparable to the act of meditation. “Because he didn’t own a piano until he signed a deal with Verve (a Polygram subsidiary) later in his career, he would borrow people’s pianos,” says friend and memorial project director Eugene Skeef. “He would visit people’s houses and then crossnight for a couple of days because that’s how he mastered his skill.”

That Mseleku is a self-taught, and moreover, a technical wizard, means that he is harder than most to honour musically. But Washington sees Mseleku’s kindred spirit in Makhathini.

Makhathini says he remembers once, as a group of students at the Natal Technikon (where Mseleku had a residency during one of his post-1994 returns to South Africa), wanting to honour him by playing a concert of his material. Mseleku was humbled and nonplussed, “‘You really sounded great when you were playing that stuff you attributed to me, but I don’t think you should have played my songs,’ he said at the time. “Every time I have to play Mseleku’s songs I am reminded of this story, and I have been seeing that a lot of the charts are inaccurate as well.”

UKZN Centre for Jazz lecturer Neil Gonsalves speculates that what may have happened over the course of Mseleku’s career, was that as his stature grew, Mseleku played with more and more musicians. “He would ask different people to write a chart and they would write from their own knowledge of naming things. He would take those things to the next guys but only when they are playing it he would say ‘no, no no, change this change that’, but maybe they never went back and changed the charts.”

Makhathini concurs: “So more than anything, at the rehearsal I was trying to say, “No, that’s not that chord. That’s not that chord. Like Mister Allard and all those songs. They are doing well with the melodies but when it comes to the harmonies, they need to be rewritten.”

Makhathini’s solo on Monwabisi — capturing the essence of Mseleku’s emotional intent without actually imitating — is probably as good as it gets, in as much as it explores the complicated ways in which the priesthood of jazz functions. “Some people think I have a voice and some people think I sound like him and that is beautiful to me,” says Makhathini. “He is a school. In jazz there is a tradition of finding your voice through someone else.”

But more than musical, Mseleku complicates the idea of South Africanness and the vocabulary of memorialisation. His brother Langa Mseleku says the last he remembers, talk of state involvement in the matters relating to his brother ended in 2008, with the repatriation of Mseleku’s remains. This was during Pallo Jordan’s tenure as arts minister, and talks to support a Mseleku run of dates before his death ended in unanswered calls. Skeef, one of the main drivers of the International Bheki Mseleku Memorial Appeal, believes the ball still rests on the department’s court and is not ruling out government’s support of his future plans, which include a music school in honour of Mseleku.

But if his name says something of his nature, then Mseleku is a guardian to us all, teaching us to triumph through limitations, and the lasting joy that accompanies tireless, purposeful labour.