​The ANC has a lot to learn from the EFF and the DA, which are the future 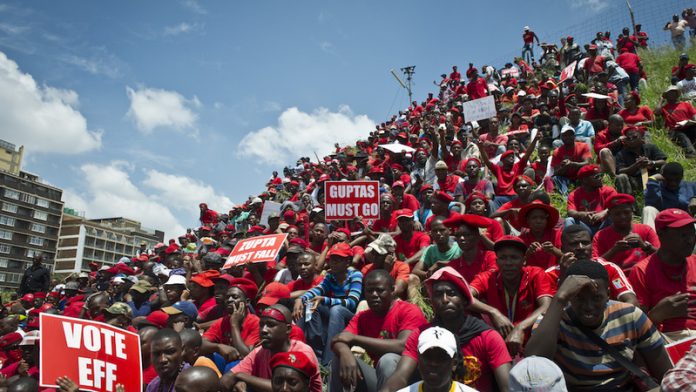 POLITICS
On August 3, I took a special trip from Gauteng to the Eastern Cape to do my civic duty. I cast my vote in the local government elections. That was the easy part. A more vexing question was how I would allocate my votes. This entailed a strategic move, rather like a game of chess.

I last voted for the ANC in 2006. I was confident about the direction the country was taking: the management of the economy was steady, unemployment was being addressed, a safety net was put in place for the poor and indigent, public services were being funded — although there was much debate about, even vilification of, the HIV policy — and we were a confident participant in advancing the African agenda.

Yes, there was corruption, but we were certain that the government, presidency and ministers were not the ones who were mired in corruption. There was evident decency and truthfulness, even to the point of hurting, and political work was conducted with integrity.

Since then, 2016 saw the worst, most base, downright stupid, if not racist, messages ever to come out of the governing party. The campaign was also about promises and more promises, with very little attention given to the fact that we were talking about a party that has been in government for 22 years.

It was a case of never taking responsibility, or denying that there has been any mess, or explaining away the obvious and distributing blame everywhere except where it belonged.

We were entertained to a spectacle of raunchy dance moves, bling and superficiality, as well as old-fashioned and meaningless “freedom” songs. The governing party treated us, the electorate, like fools and took us for granted, expecting us not to reason why but to do and die.

The party did not inspire confidence. It did nothing to earn my vote.

It was evident to all except the ANC that this would not be yet another ballot cast in the traditional fashion. Before voting day, attendants at my regular petrol station spoke about the elections and most indicated that there was no way that they would vote for the ANC. A taxi driver told me in no uncertain terms that he would be voting for the Economic Freedom Fighters, and the women behind the tills at Pick n Pay said they would not vote for President Jacob Zuma.

None of these people was interested in whether Thoko Didiza or Kgosientso Ramokgopa would be the mayor of Tshwane. They detested the Zumaisation of the ANC and they associated the party with corruption.

Living as I do in Gauteng, I was put off by the blatant abuse of state resources for party political campaigning: bling noticeboards along the highways, adverts by the City of Johannesburg and government departments, and the dishonourable treatment of the elderly and infirm by Bathabile Dlamini and her department of social development, which dished out blankets and food parcels. In some places this caused a stampede and some older people were injured.

I have heard it said by many people that they wished there were elections every year because blankets, food, housing and improved roads would simply materialise from nowhere.

This is a sad development because I know many comrades in the ruling party who are doing their best to steer the ANC in government so that it is accountable to the people. I can mention Danny Jordaan (Nelson Mandela Bay metro), Parks Tau (City of Johannesburg), Ramokgopa (City of Tshwane) and Didiza (the ANC’s Tshwane mayoral candidate). On their own, they deserve support but as candidates of the ANC they were destined to sink with their party.

At the voting cubicle I made my decision to vote tactically. I was aware that the ANC was bound to lose votes, though I could never have guessed the scale. I realised that politics in our country was a new ball game but the ANC had not become aware of that fact. Bebesadla ngendebe endala — they’re eating off a very old plate; stuck in the past, they’ve been left behind.

I realised that my vote was important and I cast it for the United Democratic Movement ward councillors candidates. My proportional representation vote went to the EFF. I did not know any of the candidates, but I voted for their parties.

Bantu Holomisa of the UDM continues to be the most intelligent and reasonable politician in our country. He deserves to garner more support for his party than is currently the case. The EFF has been the most impressive throughout the campaign. I am not surprised that they increased their vote by a million this time round. They are a fresh voice on the political scene — intelligent and uncompromising.

Above all, I believe that the EFF and the Democratic Alliance represent the future of this country. They are fielding younger leaders, and their public representatives are men and women of all races and colours. They are also articulate in expressing their policies, even if one has doubts or even disapproves of them. Mmusi Maimane and Julius Malema are intelligent people — no one cannot take that away from them — and in just about every debating opportunity, they put the ANC in its place.

Now we have to live with coalition governments at local government level. That is a good thing. Among other things, it means that this nation, maybe for the first time, will call on the resources, skills and expertise of a broad spectrum of citizens to make this country work, regardless of ideology or political affiliation.

It also means the discipline of political partnership will temper the negative hegemony that has been so much a part of our political spectrum, and it means that efficiency is put in place and the rampant theft of public resources is checked.

We now have a chance of witnessing local governments exercise autonomy without the restraining diktat of national parties.

The downside of coalitions, especially if political maturity does not manifest itself, is that there will be unstable and weak government if alliances are formed and re-formed, especially if bribery plays a dominant role in loyalties.

As for the ANC, I believe that it can only be a good thing for the party to warm the opposition benches for a while and learn to be humble and loyal. In time, the ANC will learn once again be the servant of the people, to rid itself of materialism, to do without the bevy of hangers-on who are there to protect the leaders against their own people, and to tone down the swagger of self-importance.

If that is done, the ANC can reclaim the proud mantle of being the people’s party.

Barney Pityana is a retired vice-chancellor of Unisa and emeritus professor of law at the university.