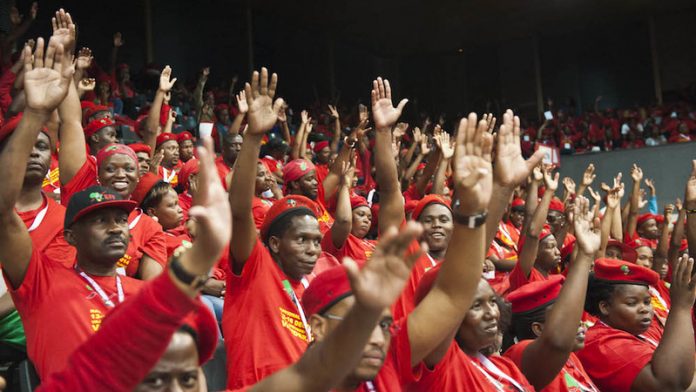 One by one, EFF members disrupted the Johannesburg inaugural council meeting on Monday, as ANC councillor-elect Dan Bovu waited to be sworn in, in Johannesburg. The EFF has lodged a case against Bovu for corruption and bribery.

For a moment, it seemed as if the EFF caucus in City Hall, where the ceremony was taking place, would prevent the proceedings to continue until Bovu was taken away in handcuffs.

“Corruption is eating away at opportunities of the poor masses. Here we are, to be sworn in, but we are also agreeing to being an accessory to a crime,” Musa Novela, the EFF’s councillor-elect for Alexandra said.

Trevor Fowler, the Johannesburg city manager and chair of the council meeting, said that the proceedings are legally bound to continue and the Independent Electoral Commission had declared all councillors elect who are now due to be sworn in.

But the EFF wasn’t having it. “The police are outside. This matter is clear. There’s a case number, it’s corruption,” an EFF member said.

“They [the police] will tell you we are looking for this criminal. We are not ready to proceed with this criminal in front of us. This person is wanted,” the member continued.

Over the weekend, the EFF released a statement saying it had pressed criminal charges against Bovu. The EFF is accusing the ANC councillor of offering its members hundreds of thousands of rands in exchange for votes at the inaugural council meeting today.

“Dan Bovu, who thinks our democracy is up for sale. Dan Bovu has been calling our councillors, offering them money to the value of R500 000 in exchange for them to vote with the ANC during the elections of the Johannesburg City Council tomorrow,” Mbuyiseni Ndlozi, EFF spokesperson, said in the statement.

The EFF say they have laid charges at Eldorado Park and Brixton police stations. Bovu, the outgoing Member of the Mayoral Committee for Housing for Johannesburg, responded in a statement of his own, saying the EFF were indulging in grandstanding.

“I have noted with great concern the serious‚ defamatory and spurious allegations of bribery the EFF is making against me to bribe their Johannesburg councillors. It must be stated that I have never met EFF councillors nor have I offered anyone bribes to vote with the ANC. I intend to open a case of defamation against my character by the EFF,” he said.

Any party or coalition is required to have 136 seats to be in a majority position. The ANC currently has 121 seats, while the DA has 102 seats, and the EFF 30.

The mayor will be elected this afternoon, but in the meantime, the EFF is standing firm that Bovu has tried to buy votes from their members. Fowler said that the neither him nor the EFF have the power of arrest, and it is for the police to decide when the arrest will be made. Fowler also said that if Bovu is found guilty in court, appropriate steps will be taken regarding his position as councillor.

Eventually, the EFF members stood down and Bovu was sworn in as councillor.