Dear Caster hater: One lick of the mediocrity lollipop and you’ll suck forever 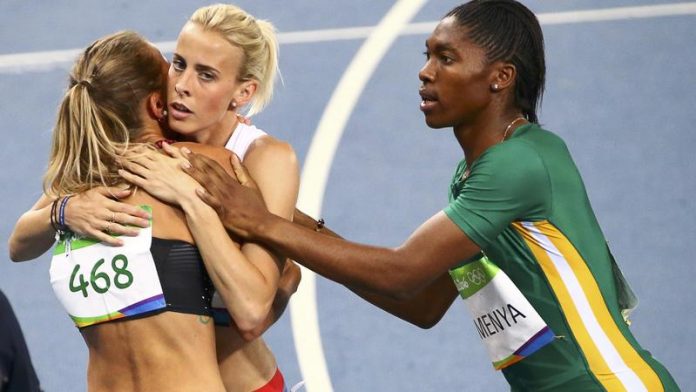 After finishing sixth in the final of the women’s 800m at the Rio Olympics early Sunday morning Great Britain’s Lynsey Sharp had a lot to say to the media. The race was won by South Africa’s Caster Semenya which made Sharp cry, saying how “difficult” it was to compete against Semenya.

This “difficulty” was in reference to Semenya’s alleged hyperandrogenism. A hyperandrogenic person’s body begets “excessive” androgens, like testosterone. Perhaps Semenya’s body naturally produces higher testosterone levels but how this affects her performance on the track is yet to be proved. Bear in mind, most female elite athletes allegedly have higher testosterone levels than men. Sharp perceives Semenya’s skill and talent as a consequence of the condition Semenya allegedly has.

In case you forgot, Sharp came in sixth in the women’s 800m final. Semenya clinched the gold, Francine Niyonsaba of Burundi and Kenya’s Margaret Wambui, took home the silver and bronze respectively. Speaking to the UK’s Guardian newspaper, Sharp broke down in tears claiming it was hard to compete against Semenya. Her emotional response came after she used unsubstantiated claims that Semenya has hyperandrogenism, which gives her an unfair advantage.

In 2014, the International Association of Athletic Federations (IAAF)  banned Indian sprinter Dutee Chand from competing on the grounds that her body naturally produced “too much” testosterone. Through no fault of Chand’s own, her condition gives her an unfair edge over other female athletes, according to IAAF policy. Although Chand brought this matter to the fore it was Semenya who was dragged unwillingly into the fray as the reluctant face of the issue.

Arbitrators gave the athletics body two years to produce enough evidence to justify its policy. For the time being, the organisation has had to suspend the hormone test. The International Olympic Committee also complied, allowing Chand and other hyperandrogenic women to compete at the Rio Olympic Games without having to lower their hormone levels.

When Semenya won the 800m race in Berlin’s 2009 World Championships, she became the subject of spurious and vindictive conjecture. Prohibited from future competitions, she was forced to undergo “gender testing”. After the tests, Semenya was given the go-ahead to race in July of 2010, but under the strict proviso that she lowers her testosterone levels through the use of medication. The ruling in that case also inspired a rule that all hyperandrogenic female athletes maintain testosterone levels under levels stipulated by the IAAF.

That rule has since been overturned. The jury’s still out on whether hyperandrogenic women have a marked athletic advantage and thus Semenya competed in Rio without managing her levels of testosterone.

Among the criticisms levelled against Sharp is her forgetfulness – Sharp finished sixth. Even if the top three athletes are removed, Sharp still finished sixth. There were two runners ahead of her. If elevated levels of testosterone are proven to give Semenya an unfair advantage; what of Poseidon … sorry, Michael Phelps? His never-ending legs, flipper-like feet and hands plus his vast wingspan are an unfair advantage too right? His lung capacity is twice that of the average person. What about Usain Bolt? He has long legs meaning he takes fewer but longer strides than his opponents. Should he be disqualified for his natural advantage?

Did I mention Sharp came in sixth? Although she was at the tail-end of the race, Sharp maintains the race was a close one and she isn’t the only athlete who feels this way. Speaking to the BBC, Sharp says, “I have tried to avoid the issue all year… You can see how emotional it all was. We know how each other feels. It is out of our control and how much we rely on people at the top sorting it out. The public can see how difficult it is with the change of rule but all we can do is give it our best.” Unfortunately, a cure for mediocrity has not been found.

A picture of Sharp’s twitter account gives you insight on where her problem lies. A cropped picture of the 800m final is used as her header image. It’s cropped in a way that makes it seem as though Sharp is leading the race.

In a statement posted on Twitter, Sharp had this to say.

Disgusted by #LynseySharp‘s unsportsmanlike comments regarding #CasterSemenya.
A lot of ‘we’ and ‘they’.
Try this: https://t.co/ykDlMXGSWE

#LynseySharp your elevated levels of privilege are showing. If only there was an injection to suppress that. #CasterSemenya

Reality check. Irrespective of everyone else, #LynseySharp‘s time wouldn’t even have made the all time top 25 800m list. Sit down please.

#LynseySharp was beaten by FOUR OTHER runners and yet she only moans about @caster800m? GTFOH and go work harder pic.twitter.com/gsF4glnxLH