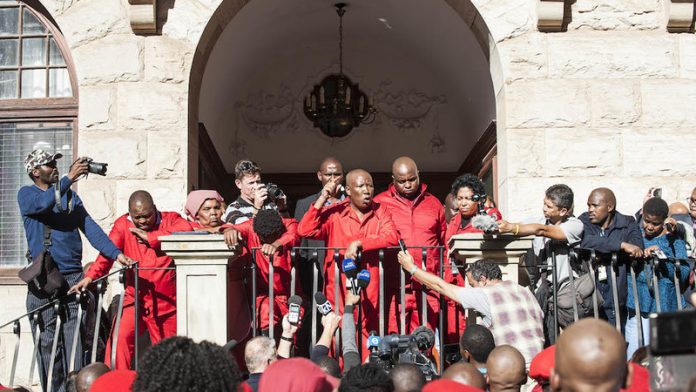 The Economic Freedom Fighters (EFF) and the Democratic Alliance (DA) could not come to a prenuptial agreement, which left the couple in a situation where there is no obvious co-operation, but everyone gets a say. In other words, a traditional marriage without the paperwork.

The demands from the EFF included appropriation of land without compensation; nationalisation of mines; free education immediately; removal of Die Stem from the national anthem; eradication of e-tolls; no to the nuclear deal; and the removal of Jacob Zuma as the head of state.

The DA followed the old mantra “you never negotiate with revolutionaries” and rejected most of the demands. The EFF then stubbornly took an all-or-nothing approach. As a romantic, I’m not sure I would have done the same.

Relationships are built on compromise. It’s a matter of give and take. Here’s how I would have handled the prenup if I were the DA: I’d start with the sensitive issues and work my way down.

Land appropriation is tricky. I don’t own any land so perhaps I’m not the right person to ask about it. Then again, asking people who do own land or those who don’t might not get you very far either. So I’m going to sit on the fence for this one. A short fence enclosing a small piece of land.

It appears inflation is not going away and that’s bad news for the free education movement. As things stand, free education will not happen unless Zuma and Higher Education Minister Blade Nzimande can come to a compromise (so crucial) that sees Zuma pay up for Nkandla and Nzimande finds the balance for free education elsewhere. The two are not currently in a working relationship, so that seems unlikely. Free education gets a no.

Eradication of e-tolls gets a resounding yes. “Free-tolls” has a nice ring to it and might even ring itself if someone had the good sense to put a bell up next to a highway and let us ring it. For free, of course.

Not signing the nuclear deal seems to be included in the demands for dramatic effect because there is no deal on the table at present. I would change it to “Don’t sign anything unless we’ve all voted on it”. However, making new demands does not form part of a compromise. Don’t sign the nuclear deal gets a yes.

The final demand – remove Zuma as the head of state – is also a bit of a waste in my opinion. It’s the “don’t sleep with other women” of political prenups and not worth the paper it’s written on. It gets an obvious yes.

Four out of seven demands met is a great compromise in anyone’s book, but the EFF does not play by the book. South Africa’s swashbuckling party is going it alone. And Godspeed to them.

When employees do not give their best, it is the organisation that suffers the most. In the case of government this directly affects citizens
Read more
Politics

The KwaZulu-Natal MPL, who is running against John Steenhuisen for the post as party leader, embodies the hopes and dreams of the majority of citizens
Read more
Advertising