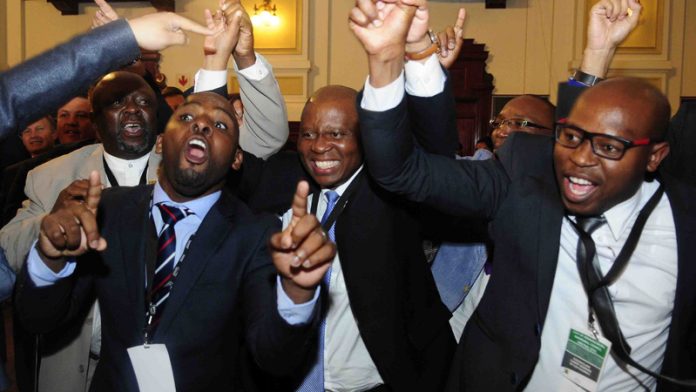 South Africa is in a tryst with tumultuous times as coalitions take shape to unlock hung municipalities following the 2016 local government elections.

The implications for local government and the administration of municipalities is enormous. This is because most are largely politicised after 20 years of uninterrupted rule by one party, the African National Congress (ANC). An additional reason is that municipalities are not simply administrative outposts of the national and provincial governments. They are also required to play a developmental role. To do this the country’s Constitution stipulates that they must “structure and manage [their] administration and budgeting and planning processes to give priority to the basic needs of the community and to promote the social and economic development of the community.”

Can the coalition arrangements of hung municipalities, which largely spawned minority governments, live up to this? Do they portend the possibility of non-partisan administration of municipal affairs? These questions are important because institution-building and consolidation of state capacity for the country’s development require a professional bureaucracy. This issue has not been adequately considered amid all the talk about the political implications of coalition building in hung municipalities.

The situation that’s emerged in South Africa is new for the country. But it is by no means unique. Nearly two thirds of the countries that make up the European Union are run by coalition governments. In most they have been part of the political system for a long time, with the exceptions of Britain, Spain, and Greece where they are relatively new. How they have fared differs from one to another. But a dominant lesson is that to optimise the efficiency of governance, a professional and stable bureaucracy in the administration of the state is important.

South Africa should take this into consideration as it experiments with coalition politics.

Patterns of patronage
A research report by the Mapungubwe Institute for Strategic Reflection, Patronage Politics Divides Us, is edifying. Its analysis shows that the edifice of municipalities’ institutional disposition in South Africa is patronage. Their bureaucracies are staffed largely on a partisan basis, especially in senior management, where tenure in office is linked to an electoral term.

So too are their integrated development plans, which appear to respond more to partisan politics than community needs. This delegitimises municipalities. This explains why communities have adopted “extra-judicial measures” – such as protests and the destruction of public property – to communicate their concerns. It also explains, at least in part, the governing ANC’s fate in the elections.

The challenge in formulating a new approach to local government is that no grand coalitions have been formed in councils where the ANC has lost its majority but where no clear winners emerged.

The radical Economic Freedom Fighters (EFF) dashed this possibility by declining to go into alliance with the main opposition Democratic Alliance (DA) to constitute councils in hung municipalities.

The EFF has, however, said it will vote with parties in coalition arrangements against the ANC. The minority governments require the votes of the parties that are not part of the coalitions in councils, especially in major policy areas such as budgets and development plans. This is necessary as the margins of the electoral performance, especially among the major political parties, are close in the hung municipalities, with the ANC relegated to the opposition benches.

So does the outcome of the 2016 local government mark the beginning of the new era? We hope so. As opposed to the mediocrity that patronage politics produces, non-partisan administration institutionalises meritocracy and legitimises government. Is this where South Africa is destined to go? Can municipal officials become true professionals, with a sense of public service?

A professional bureaucracy will be hard to build
One possibility is that the new coalitions simply become arrangements for the politics of patronage to change hands. This is highly possible if the motive of the DA and EFF is to work together for the sole purpose of keeping the ANC out of power.

An additional problem is that the ANC’s power in municipalities it has governed is consolidated in the bureaucracies. Although it is politically displaced in some, it is still bureaucratically intact. This suggests the possibility of governance paralysis for the new coalition governments.

Naturally, politicians fear bureaucrats becoming “the power elite” and that they then dominate the “governing process”. Because of this, we foresee widespread purging –- relatively easy in the South African system of local government where the governance framework is susceptible to partisan manipulation.

Given the EFF and DA’s steadfastness to get the ANC out of power, the coalition councils are likely to take advantage of the governance framework to influence staffing choices.

The gush with which the ANC is pursued is likely to go as far as flushing out those considered ANC loyalists in the administration. Often the risk with this is to lay off those who are efficient and competent – a case of throwing out the baby with the bathwater.

This has happened before. When the DA took control of Cape Town after municipal elections in 2000 it dismissed senior officials appointed during the ANC’s administration and replaced them with those it considered “politically suitable and acceptable”.

This is likely to repeat itself, but perhaps discreetly this time around: a case of fighting patronage with patronage. This does not bode well for meritocracy in the administration of municipalities.

System invites partisan politics
What compounds the pursuit of an effective system of local government in South Africa is its governance framework, as prescribed in law, which is vulnerable to politicisation.

Legislative and executive powers are concentrated in the municipal councils. The executive authority is delegated to either executive mayor or an executive committee of the council, depending on the executive municipal system used.

This is at odds with the principle of separation of powers. Most scholars argue that the arrangement is fundamentally flawed.

It exposes the administration of municipalities to partisan politics. The municipal councils are directly involved in the administration. They appoint senior managers. Their tenure is linked to a five year electoral term. This institutionalises politicisation of bureaucracies. The spoils are dispensed to sustain political loyalties and allegiances.

Appointments are also partisan-based below senior management. In the Amathole District Municipality in the Eastern Cape province, the court found that, in 2009, the ANC dominated council took an instruction from its regional executive committee to appoint a particular candidate to the post of municipal manager. This was despite this candidate not performing as well as others in the interviews.

In the mix is also the partisan-driven planning system linked to a five year electoral term. This makes a mockery of the Municipal Systems Act, which stipulates that the planning process should be community-centred and widely inclusive. If development plans are community-driven, why do they change each time political power changes hands? What this shows is that the planning system should be delinked from the five-year electoral term.

The fate of coalitions depends on a rethink of South Africa’s system of local government. Otherwise tumultuous times await the country.

ANC battle now moves to the regional and provincial conferences