The Zuma vs Gordhan showdown: What are the key battles? 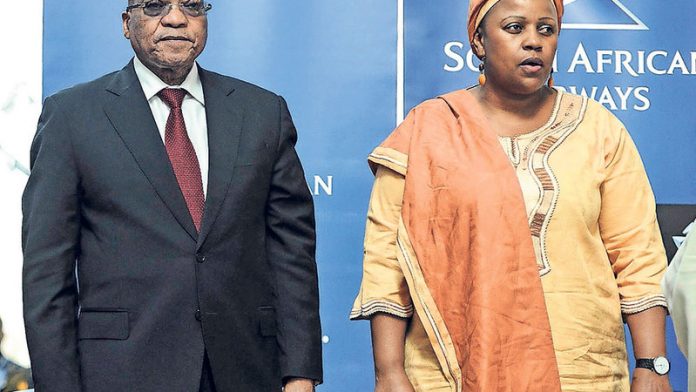 In the wake of calls for President Jacob Zuma to resign during post-election coalition talks and attempts to deflect responsibility from him at the ANC national executive committee’s recent meeting, Zuma has made a daring power play – taking charge of South Africa’s state-owned enterprises.

The decision to place Zuma in charge of a new co-ordinating committee of state-owned entities was taken at the post-election Cabinet meeting last weekend.

The presidency insists there is “nothing sinister” in the establishment of the Presidential State-Owned Enterprises (SOE) Co-ordinating Council. Its role, said presidential spokesperson Bongani Ngqulunga, is to ensure that state entities work together and do not usurp the responsibilities of line-function ministers.

But the extreme tensions involving key state-owned entities – and, in some cases, the president’s friends – potentially puts the president in direct confrontation with the national treasury.

More specifically, he could lock horns with Finance Minister Pravin Gordhan, who has blocked granting state money to bail out troubled SAA.

The crisis at SAA was further entrenched this week when audit and risk committee nonexecutive board member Yakhe Kwinana resigned. She had served on the airline’s board since 2009, and said her professional certification and reputation in the industry was at stake if she stayed on.

The state-owned airline is on the verge of being liquidated and could lose access to the lucrative Hong Kong route if it does not submit its financial statements to that country’s registrar of companies by September 6.

SAA asked the government for a R5-billion guarantee. If this is not secured by the end of next month, the airline could be grounded locally as well.

Standing in the way is Gordhan’s refusal to succumb to perceived pressure by Zuma to grant the bailout – and the finance minister’s apparent attempt to axe chairperson Dudu Myeni and her remaining board colleagues over what the ANC termed “governance challenges”.

Kwinana this week reportedly warned that, if the guarantees were not made available, the airline would face liquidation.

SAA spokesperson Tladi Tladi said: “Our request for assistance in the form of guarantees has been communicated to shareholders. It’s a open secret that we are in need of money.”

The directive from Minister of Transport Dipuo Peters to “close off” the Prasa investigation comes at a time of high political pressure on her department.

It follows allegations that Angolan entrepreneur Maria da Cruz Gomes and Durban entrepreneur Roy Moodley, close friends of Zuma and the ANC, benefited handsomely from the Prasa tenders and may be implicated in the probe. There is also growing suspicion that the investigation may lead to Zuma himself.

“The matter is under investigation and whoever you are referring to will most probably be afforded an opportunity to respond to the allegations and explain their participation. Neither the presidency nor the president has any role to play in the matter,” presidential spokesperson Ngqulunga said.

This week the Gupta family threatened the national treasury with an interdict, after the Democratic Alliance asked for the findings of an investigation into Eskom coal contracts awarded to Tegeta Exploration and Resources, a mining operation owned by the Guptas.

Gordhan commissioned the probe in February in a bid to crack down on corruption linked to contracts above R10-million. The DA’s request for the investigation’s findings was rejected by the treasury, which said it had not yet made comments on the outcome or had sight of evidence linked to the probe.

The treasury has also limited the budget for nuclear procurement preparations to R200-million. The total cost of the project has been forecast at a trillion rands.

In March, the state missed Energy Minister Tina Joemat-Pettersson’s deadline to announce South Africa’s partner to develop nuclear energy. The Gupta family has positioned itself for massive benefits if the deal goes through, having already purchased the Shiva Uranium mine.

At the heart of the falling-out between the treasury and state arms manufacturer Denel is its joint venture between VR Laser Asia and Denel Asia, which Gordhan said was not approved by his department.

In May, the Denel board’s chief financial officer, Odwa Mhlwana, appeared before Parliament and defended the Gupta-linked deal, saying Denel had sent prenotification of it to the treasury and Public Enterprises Minister Lynne Brown in October last year.

“But because no response was received in a reasonable time [of 30 days], Denel went ahead and founded the joint venture … If you don’t hear from these departments, you may deem that approval has been granted,” Mhlwana said.

Although the venture has not been scrapped, it remains unclear whether it was authorised.

As government pushes for a huge increase in electricity generation from gas, serious questions are being raised about the logic behind the move
Read more
Business

As the government continues to grapple with the troubles facing the airline, it would do well to keep on eye on the impending Denel implosion
Read more
Business

State participation is valid when the market can’t deliver what’s needed, such as roads and rail networks and telecommunications. But banks and airlines are private enterprise concerns
Read more
Business