​Instead of fiddling, Coetzee has a perfect opportunity to perfect the team 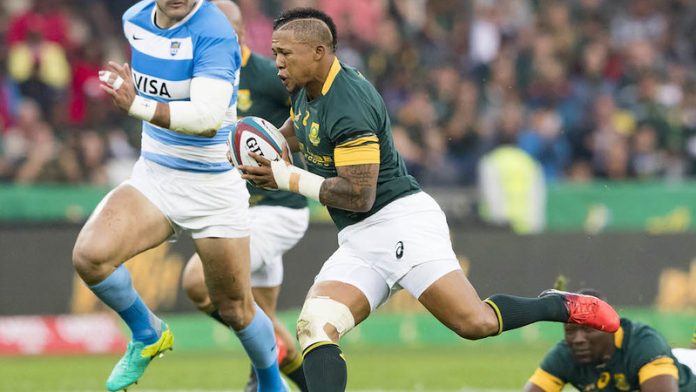 You might think there was a World Cup next month, or that the coach’s job was on the line. Instead, the 2016 Rugby Championship is but a week old and the Springboks overcame a good Pumas team in Mbombela (Nelspruit) last week with a final-quarter surge. It is about as far from a crisis as life ever gets in the Springbok camp.

And yet we are told there is pressure on Elton Jantjies to perform at Test level. The Lions pivot has failed to display in a Springbok jersey the kind of game-breaking genius that became commonplace during Super Rugby. Fearing another average display, Allister Coetzee has brought Morné Steyn back into the squad for Saturday’s Test against Argentina in Salta.

This is another example of muddled thinking and it is time Coetzee took a chill pill and accepted a few hard facts. First, Jantjies is easily the best flyhalf currently available. By this time next year, things might look different — Handré Pollard and Pat Lambie may be playing irresistible rugby. But right now both are injured.

Second, the pack needs a serious shake-up. Francois Louw is displaying the signs of having played too much rugby in the past three years. Jaco Kriel’s pace would bring a much-needed new dynamic to the back row. Tendai Mtawarira will become South Africa’s most expe- rienced prop forward on Saturday, equalling Os du Randt’s record of 80 caps.

Mtawarira is just 31, but like Louw he looks as if he needs a rest.

Then there is the conundrum of the captain. Adriaan Strauss spent so many years being the second-half replacement for Bismarck du Plessis that he seems unsure about what to do with 80 minutes at his disposal. Strauss was comprehensively outplayed by his opposite number, Agustin Creevy, last week.

If the coach is going to grasp the nettle, he needs to do it soon. Make Warren Whiteley vice-captain and tell Strauss that he will be replaced by Bongi Mbonambi in the second half. That should focus things nicely.

Another aspect that needs attention is unquantifiable — attitude. Players and management spend hours in press conferences explaining how the Pumas cannot be under-estimated. And yet, when Mattias Orlando scored an end-to-end try that involved sublime handling skills and expert running off the ball, it seemed to surprise everyone.

This is season five of the Rugby Championship, and during that time Argentina have proved they belong at this level. A new generation of players is entering the fray, and these youngsters want no truck with the idea that a narrow defeat is an honourable thing. They have attitude.

Eighth man Facundo Isa looks like a superstar in the making. If he were a Frenchman or a New Zealander, he would already have signed lucrative sponsorship deals. Isa may be remarkable but this Puma side has good players in every position; with home advantage this week they should be narrow favourites.

That is not to say that the Springboks are on a hiding to nothing. It took a lot to shake them out of their torpor in Mbombela, but ultimately they proved themselves a side with potential, one capable of playing with precision and pace under pressure. Faf de Klerk’s lateral run to create a try for Johan Goosen should inspire the whole team, and Jantjies in particular, to reach for the stars.

To do so, however, the coach also needs to cast caution aside. The recall of Steyn sends the wrong message. If Jantjies happens to have a poor first half in Salta, then the option exists to move Goosen to flyhalf and bring Jesse Kriel off the bench to play at fullback. Steyn’s selection is at the expense of Juan de Jongh, and that can’t be right.

De Jongh finds himself cast out of the 23, and yet many would have had him in the starting 15 ahead of Damian de Allende. It may seem churlish to mention it, but the absence of De Jongh also changes the racial balance of the side. This week, there are seven players of colour in a squad of 23, way short of the 12 required to get past the “target” of 50%. If Coetzee can’t manage to play the quota game now, what will it be like further down the line?

Ironically, an away win this week may increase the pressure, especially if Australia are humiliated by the All Blacks in Wellington. In those circumstances, the Pumas and Wallabies would both have lost two matches, and the All Blacks and Springboks will have won two, setting up the Rugby Championship for a straight showdown between the two old rivals.

Coetzee’s job is nothing like as difficult as Michael Cheika’s. The Wallaby coach has lost four successive games on Australian soil this year, his team looking increasingly bewildered along the way. For all its faults, this Springbok side has enough going for it to embrace the future with enthusiasm. The same cannot be said about the Wallabies.

New Zealand has said its new coaching team will be named before Christmas, but it has now missed out on at least three high-profile candidates
Read more
Sport