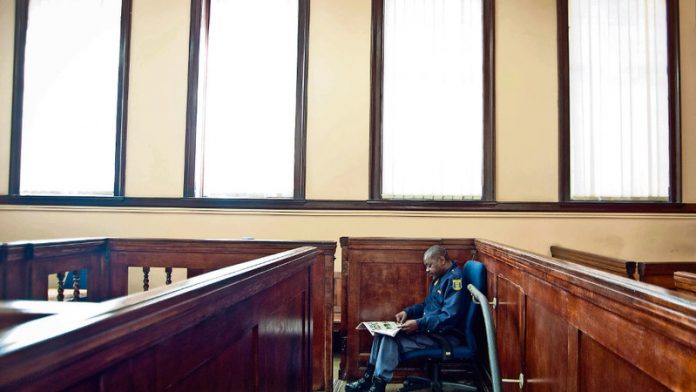 “Baby papa of neighbour doesn’t maintain and he works. Neighbour is unemployed. Direction please,” one person wrote. “Can I bring forward a [maintenance] enforcement order to a court nearer my workplace?” another asked. She explained that she had on two occasions, in 2014 and 2015, submitted documents to a magistrate’s court, but failed to receive any response.

When the department of justice and correctional services recently invited legal queries from women, these were typical inquiries.

The initiative was part of the ministry’s Access to Justice Week, an annual initiative held during Women’s Month, which aims to “provide justice for women throughout the country through the provision of workshops, legal advice and outreach campaigns”.

The topics on which women requested advice were revealing. When justice for women in South Africa is discussed, the focus is often overwhelmingly on gender-based violence. This might seem like a no-brainer in a country with one of the highest rape statistics in the world. At one stage, researchers estimated that the rate of convictions for all rapes carried out might be as low as 4%.

The roll-out of the Thuthuzela Care Centres, intended as one-stop shops for dealing with sexual violence, were hailed with great fanfare. The United Nations Children’s Emergency Fund refers to them as “well known as models of good practice in the fight against rape”. But experts say, although the centres have helped with issues such as the treatment of rape survivors and may be assisting in raising the rate of reporting rapes, they have their limits.

“Reporting is only the first step,” the Open Democracy Advice Centre’s Alison Tilley says. “You want to keep people moving along the criminal justice system.”

It is for this reason that legal campaigners recently launched a renewed push for the establishment of more dedicated sexual offences courts, specialised institutions set up to deal with sexual violence, which were rolled out successfully until 2005 and then abruptly halted.

In 2013, erstwhile justice minister Jeff Radebe promised that 57 sexual offences courts would be up and running within three years. There are still only 43, and Tilley says that many are not as well equipped as they should be.

“Their [department of justice] way of counting those courts is that those are the ones they have made infrastructure changes to,” Tilley says. “But that’s only part of it: you need the National Prosecuting Authority to put prosecutors in place, and magistrates to sit there.”

Such courts might not be a magic bullet, Tilley warns, “but if you have a specialist centre then theoretically it all gets better”.

The difficulty women have in bringing perpetrators of gender-based violence to book has again been on the agenda this Women’s Month. The reality, however, is that physical violence is only one element of the gamut of legal problems faced by South African women. This much was made clear by the kind of inquiries directed to the department of justice during its Access to Justice Week.

“Gender-based violence is one of the most pernicious manifestations of gender inequality, so there’s a reason why it gets so much attention,” says Sanja Bornman, an attorney at Lawyer for Human Rights who runs the body’s gender equality programme. “But, when we talk about access to justice, we should remember that there are many other day-to-day struggles for women.”

Bornman says the majority of legal matters that women need assistance with are civil issues — divorces, maintenance difficulties, land and housing disputes, and issues around the care of and access to children. This is what Tilley calls “the bigger-picture problem”.

“The entire system is gendered because services provided by the court are focused on criminal law, and the majority of the accused in the criminal law system are men,” Tilley says.

The notion that men are overwhelmingly the ones in trouble with the law is beyond dispute: the most recent available statistics show that only 2.3% of South Africa’s entire prison population are women.

Because the system is skewed towards criminal law, the resources available for women struggling with civil law issues are inadequate. Free legal representation is usually unavailable in such cases.

The Access to Justice initiative aims to address this situation by holding workshops around the country, teaching women about their rights when it comes to matters such as maintenance, customary marriages, divorce and the drafting of wills.

But Bornman says such projects do not address a more pressing issue.

“Legal advice is not really the problem — many NGOs and paralegal offices exist for this purpose, and Legal Aid will also provide advice,” she says.

“It’s legal representation that is extremely hard to find if you do not have a substantial amount of money. People have very low levels of legal literacy in this country, and often feel they need representation even in forums that are supposedly designed to be accessible to lay people.”

Legal Aid has limited funds, but Bornman suggests that one possible solution would be to call on the private sector for greater assistance.

“All attorneys have a certain number of pro bono hours they provide per year and, if you’re in need, the Law Society finds you an attorney after applying a means test. The problem is that, if you’re embroiled in something like a tricky maintenance or divorce case, the pro bono hours eventually run out, and what you really need is for someone to see the case through.”

He confirmed that some of the most common queries were about child maintenance and the administration of estates, but added that domestic violence, sexual violence on campuses and pending cases with the police were also on the agenda.

Mhaga said the department considered being uninformed to be the greatest impediment to women seeking justice. “There is a lack of know-ledge by women about justice services and procedures. However, the department often embarks on other events to educate and empower women, especially in rural areas.”

A ministerial task team set up in 2013 to consider the adjudication of sexual offences stipulated that the department should establish 57 such courts by this year. “This is phase one of the sexual offences courts project, which the department intends to finalise in 2016-2017,” said Mhaga — though he added the ominous caveat, “resources permitting”.

The second phase should see 106 regional courts becoming sexual offences courts. “What this means is that, by 2017-2018, the department must have established 163 sexual offences courtrooms.” The courts need to be spread over rural, semiurban and urban communities. — Rebecca Davis

Zuma will not get any special treatment while in prison, says Lamola