Tales from the armed struggle: There were heroes in MK but villains, too 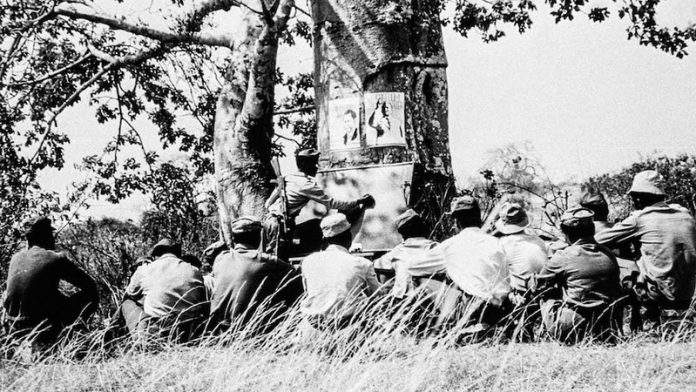 Within a few pages of Thula Simpson’s rather large tome, there are several key moments that illumine the history of the ANC’s armed wing and the state it had got into on the eve of liberation.

It was the period immediately after the August 1989 Harare Declaration, which had set out the conditions for a negotiated solution to South Africa’s deadlocked war between the apartheid state and the liberation movements.

The declaration was endorsed by the Organisation of African Unity (OAU), the Non-Aligned Movement and the Commonwealth; it set the agenda for the negotiations that would follow once FW de Klerk, South Africa’s president, unbanned the liberation movements in February 1990 and released Nelson Mandela.

In the gap between the Harare Declaration and the unbannings, the ANC made its usual January 8 statement. Umkhonto we Sizwe (MK) commander Chris Hani spoke to reporters, telling them the “lull in MK attacks in 1989” was not because the movement was suspending its armed struggle, but for logistical reasons and because MK was hobbled by apartheid agents who had penetrated it. “We have learned our lessons,” he said. The ANC promised to intensify the armed struggle.

“There is not a great deal to intensify,” wrote journalist John Carlin at the time. He noted that what the apartheid government called “terrorism” and the ANC called “armed struggle” in fact “barely exists beyond the minds of those who employ those terms”.

Meanwhile, back in South Africa, MK operatives trying to set up bases or cache arms were still being captured or shot by the security police. The ANC and MK’s top-secret Operation Vula, designed to set up an internal leadership, was under way — but its leaders, among them Ronnie Kasrils, Mac Maharaj and Siphiwe Nyanda, would soon be bickering, and it would not be long before the whole operation was blown.

A week after the January 8 statement, the ANC’s national executive met in Lusaka, with acting president Alfred Nzo welcoming delegates and speaking at an open session. Zambia’s president, Kenneth Kaunda, a longtime supporter of the ANC, was present. Nzo managed to get his speeches muddled, though: he read out not the general statement for public consumption but one intended for a closed session, in which he said: “Looking at the situation realistically, we must admit that we do not have the capacity within our country to intensify the armed struggle in any meaningful way.”

The Lusaka meeting ended with a gathering of all the ANC and MK people in the city. The guests of honour were ANC leaders Walter Sisulu and Raymond Mhlaba, members of the original MK “high command” of the early 1960s, who had recently been released from Robben Island as a kind of dry run for the projected release of Mandela. They were shocked to hear what the MK people had to say.

The soldiers hailed Mhlaba as “Commander!”, with one speaker later saying he was needed “because we don’t have a commander”. Another tackled the exiled leadership on the podium: “If you leaders want to represent us there is one thing to do, all of you — resign now.” This call was met with cries of approval.

Joe Modise, then the commander of MK, tried to defend himself, but it was up to Sisulu to quieten the angry soldiers and assure them that the struggle would continue on various fronts.

It would have been fascinating to hear what Modise might have said to defend himself against such charges. They were, after all, much the same charges as those levelled against him and other ANC leaders in the 1960s and again in the mid-1980s. Basically, they were accused of not prosecuting the armed struggle properly, of failing in their duties as its leaders and instead spending their time involved in criminal and business activities that benefited them only and not the movement in general.

Modise was certainly the chief gangster of the ANC in exile, and he continued to be once the ANC came to power — he was the central figure in the highly corrupt arms deal that poisoned the ANC’s moral leadership in the late 1990s, the toxic effects of which still linger in South Africa’s body politic. How did he ever get the job of MK commander, and how did he keep it? Allegations against him continued throughout the ANC’s period in exile, but no one seems to have been able to rein him in or get rid of him. He could hardly have retarded the armed struggle any more effectively had he been an agent of the apartheid regime.

The famous “Hani memorandum”, drafted by Chris Hani and others in the mid-1960s, raised such issues — and nearly got Hani executed by Modise for “treason”. That was the MK leadership’s usual response to any complaints from the rank-and-file, and continued to be so for decades.

The circumstances that gave rise to the memorandum are described and discussed in Amin Cajee’s and Fanele Mbali’s books, for they were both early recruits to MK and spent their first years in exile in the ANC’s Kongwa camp in Tanzania. Cajee’s memoir begins with his being sentenced to death for “treason” — for possibly being sympathetic to the Chinese at the time of the schism between the Soviet Union and China. The heavy hand of Soviet propaganda is evident here, as it would be later in the Angolan camps.

The central problem was that the recruits who had slipped out of South Africa to join the struggle, as detailed by Cajee and Mbali, were desperate to get back to South Africa to fight, but instead found themselves “rotting” (as it was often put) in the camp, and in very unpleasant circumstances too. They believed the leadership had arrogated all sorts of privileges to itself and was neglecting them. There was also fraud, as Cajee describes, with those responsible for provisioning the troops with OAU money skimming a great deal off for themselves. The recruits got some extra tinned food from the Soviet Union, at one point, but discovered its expiry date was round the time of World War II.

When MK operatives were ultimately sent into battle, as in the Wankie and Sipolilo incursions (into then-Rhodesia and Mozambique respectively), those campaigns were disastrous. Leaders such as Modise had done no reconnaissance, and the plans were not even in line with what recruits had learned about guerrilla warfare in the training they had received in Eastern Europe. Mbali tells the story of the attempt to land MK fighters on South Africa’s east coast, from the sea, which was another abortive mission. It looked to those in the camps that their comrades had been sent on suicide missions, and Cajee was one of those who felt he had to leave. He escaped to Kenya and ultimately to Britain (where he remains today).

As detailed in his very readable account, “as told to Terry Bell”, Cajee lost faith in the struggle as it was then being prosecuted by the ANC and MK. It’s not hard to see how this could happen. The corruption at the top, about which Hani and others had complained, was not being dealt with. The ANC’s Morogoro conference in 1969 helped somewhat, but it was too late for the likes of Cajee. And the same problems would arise once more, in even worse form, in the 1980s, as though the ANC had learnt nothing from the internal ructions of the 1960s.

Stanley Manong’s book, If We Must Die, covers the period of the 1980s mutinies in the ANC’s Angola Viana and Pango camps — he was there, or very nearby, and sympathised with the mutineers, and gives a compelling account of the events.

After the 1976 student uprising in South Africa, MK had received a large influx of recruits who had left the country to join the armed struggle. Manong was one of them. By this time, MK had established camps for its soldiers in Angola, which was engaged in a civil war — and sent its troops to support the ruling Angolan party, the MPLA, in its battle with the insurgent Unita movement.

That fight may have blooded some MK fighters, but it didn’t satisfy their desire to get stuck into the struggle in South Africa. The conditions in the camps were bad, and any attempts to rectify matters were usually stomped upon by the ANC’s security wing, colloquially known as Mbokodo (“the grinding stone”). There was a great deal of resentment, which exploded in the Viana and Pango mutinies. Modise was only just prevented from sending in Angolan government troops to quell the initial mutiny; they would in all likelihood simply have gunned down the mutineers. In the end, the mutiny was suppressed after some skirmishes, a handful of MK men were executed and many were sent to the MK prison camp, Quatro, where they were tortured and killed.

Simpson deals pretty briefly with Quatro and the mutinies, but that is because the swath of history he is treating is so broad and, in effect, scattered. Simpson’s book is a magnificent achievement, based on thousands of interviews, and recounting what happened at all levels in an almost day-by-day way. Sometimes it feels as though one is right there, trudging through the bush with the barely prepared soldiers, or flitting back and forth across various borders with committed and persistent infiltrators, or setting bombs with the later saboteurs in the streets of South Africa’s cities.

If what emerges is a sense of the ramshackle nature of the armed struggle, which was perhaps always only the “armed propaganda” it was later designated. There were some successes, and accounts such as Manong’s show that the rank-and-file were certainly capable of the heroism for which they were acclaimed — even if the whole was, as Oliver Tambo said of certain campaigns, a “heroic failure.”