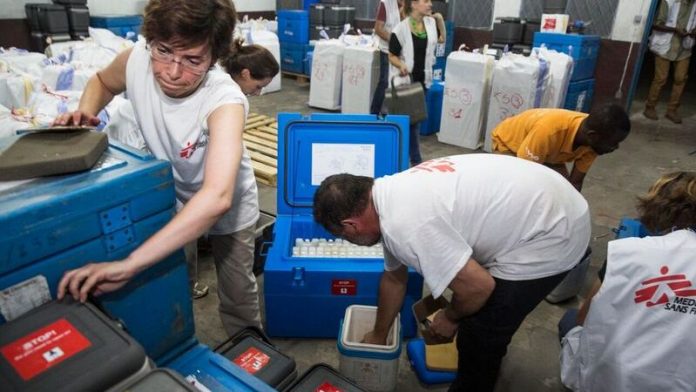 The world’s largest yellow fever vaccination effort has come to the urban sprawl that is the Democratic Republic of Congo’s capital, Kinshasa, where authorities hope to vaccinate around 10.5-million people. Doctors Without Borders (MSF) is mobilising massive resources in support of this goal.

Late last year a yellow fever outbreak struck the Angolan capital Luanda, and over time cases were soon also reported in Kinshasa, leading to a total of over 400 deaths that are suspected to be part of this outbreak.

A child is vaccinated against yellow fever. (Photo: MSF)

In Kinshasa, MSF teams are responsible for vaccinating 760 000 people – 10% of the capital city’s 7.5-million vaccination target – in three health zones. In partnership with the Congolese ministry of health, MSF is running this large-scale vaccination campaign from August 17 until the end of the month. This will be the biggest yellow fever vaccination campaign that MSF has ever run.

Yellow fever is endemic in parts of Africa, including in the DRC, and the World Health Organisation estimates that up to 170 000 severe cases of yellow fever occur worldwide each year, with as many as 60 000 of those being fatal.

An acute viral haemorrhagic disease, yellow fever is transmitted by infected Aedes aegypti mosquitoes, which also transmit dengue, chikungunya and Zika. The virus attacks the liver, causing extreme jaundice and the skin and eyes to yellow.

Yellow fever cannot be cured. Treatment is limited to alleviating symptoms and vaccination is the most effective prevention method. Symptoms of the disease include fever, headache, chills and muscle pain, with some patients experiencing a more severe phase of high fever and internal bleeding. While 80% of people infected by the yellow fever virus don’t develop any symptoms, for those who do, symptoms usually disappear within three to four days. However, after recovering from initial symptoms a small percentage of patients enter a second, more toxic phase and half of them die within seven to 10 days.

In Kinshasa, MSF is currently co-ordinating the work of 100 teams of 16 people each in three of the city’s health zones to curtail the outbreak. In rolling out this campaign the MSF team is providing management, logistics and supervision as well as giving vaccines. MSF has flown in 58 international staff from 19 countries and redeployed over 100 Congolese employees working in regular projects countrywide as part of the vaccination campaign.

“Considering that there is a very safe and effective vaccine, this campaign is an essential step to containing the spread of the outbreak, but vigilance will remain crucial in the upcoming months,” says Axelle Ronsse, MSF’s emergency coordinator

A total of 1 700 staff from the Congolese ministry of health are working alongside MSF in three health zones, including nurses who are giving the vaccine shots.

MSF Southern Africa staffer Monica Genya joined the vaccination team as supply co-ordinator on the project and witnessed the huge logistical challenge of ensuring that the yellow fever vaccines remain at between 2⁰C to 8⁰C in the cold chain while hot and humid conditions prevail. The teams need to renew 4 000 ice packs and coolers in different locations and also manage the movements of a fleet of 65 vehicles travelling in densely populated neighbourhoods.

MSF teams are also responsible for training health staff to care for yellow fever patients and are preparing selected hospitals for case management. Homes are being sprayed or fumigated to combat mosquitoes carrying yellow fever.

Besides a healthcare problem Covid-19 is also a data issue and 5G technology, with its lightning speed, can help to curb its spread
Read more
Advertising
Continue to the category
Coronavirus