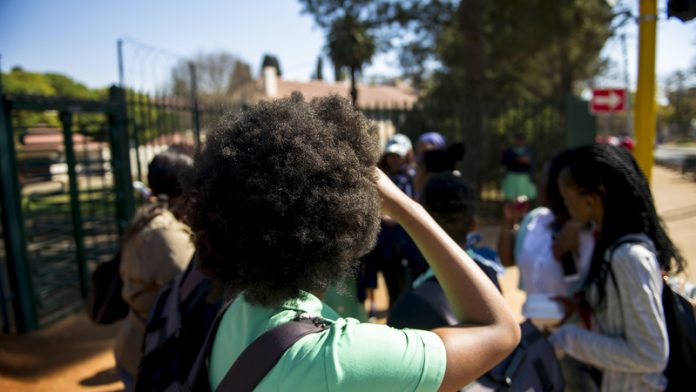 Gauteng education MEC Panyaza Lesufi has instituted an investigation at Pretoria High School for Girls to get to the bottom of the issues that resulted in anti-racism protests at the school.

“I’m officially appointing an independent investigation body to probe all the allegations levelled against certain teachers, events of August 26 and 27 and all issues that pupils felt border on racism and all related matters,” Lesufi told reporters on Monday.

“I’m giving this committee 21 days to conclude their business and to provide a preliminary report. On the basis of that report, I will discuss with the school governing body (SGB) and we will agree on a way forward.”

The decision followed a meeting between the SGB, Lesufi’s office, pupils and parents to discuss the issues of racism at the school. Pupils protested against the school’s code of conduct which restricted the type of hairstyles black pupils could have.

Lesufi said they were aware that the environment at the school needed immediate intervention in terms of race relations, cultural understanding and the need to promote social cohesion.

Among the resolutions taken at the meeting was a review of the code of conduct of the school, with the clause dealing with hair being under the spotlight.

“We mean the mini-war that was here is immediately suspended,” he said.

Lesufi said it was important for some of the issues to be brought to the attention of teachers and some of the pupils. He added that the department would also be providing psychological assistance.

The issues raised at the school have also paved the way for the department to revisit all codes of conduct of the schools in Gauteng to address the matter. Lesufi said he did not want a repeat of what happened at the school.

“I’m quiet convinced that I need to elevate this resolution to other schools in the province. I’m of the strong view that some of the issues raised in this school are not in this school alone. I will elevate these issues and I will find a mechanism of dealing with them across the province. That means all the codes of conduct from schools across the province will be immediately under review so that we don’t find ourselves in a similar situation in another school,” he said.

SGB member James Tubb said they would work closely with all the stakeholders to ensure everybody feels included in the school.

“It is actually very sad for me to realise that our awareness is not where it should be and we will work with the MEC to correct that and to make this a safe environment for everybody like we thought it was initially,” said Tubb. – News24

The week that was: Spring Day, Bey Day and everything in between

Several state and private schools have bans on dreadlocks, Afros and braids