Students continue to march at UKZN, protesting against rape and police violence 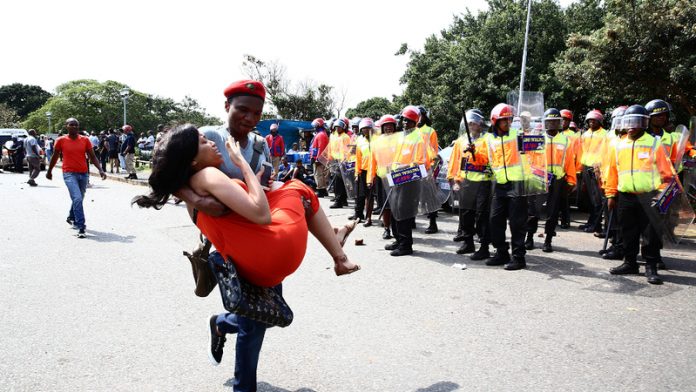 A group of women students gathered from 7am at the University of KwaZulu-Natal’s campus in Pietermaritzburg to march against rape, the police and private security. The protest came after allegations emerged that a student had been raped by police on Monday night .

Dressed in black, the students carried placards that declared their demands: “Stop rape”, “No to police abuse against women” and “My body my choice”. Videos and images of students being violently harmed went viral on social media as the campus shut down. Students say they had been peacefully protesting when police surrounded the campus and fired teargas on campus grounds, including inside student residences.

The news that a student had been raped in a gym on the campus grounds by a police officer shocked both students and lecturers. Pumelela Nqelenga, a drama lecturer at UKZN’s Pietermaritzburg campus, yesterday posted on Facebook that she had met a student who had said she was raped by a police officer. In her post, Nqelenga said that the officer was the driver of a police van and the student had noted the vehicle’s licence number.

Despite criticism of the police’s use of force and concerns raised about the alleged rape, a student told the Mail & Guardian that, “late last night [Tuesday night], police even came in with dogs”. On Wednesday morning, students decided to protest against rape and violence from police and private security on campus.

#UKZN students at the PMB campus surround a police van filled with officers. They are angry about the alleged rape pic.twitter.com/tcq0ag0yBw

As the students gathered together after they marched, one stood in front of the crowd with a loudhailer to read out theit list of demands. The university must respond to the demands today, students said. The list specifies of concerns the students want addressed immediately.

“We demand an end to the [tear] gassing of students, the shooting and beating of students. The use of force against unarmed nonviolent students must end,” a student read from the memorandum.

“We demand that the police and security forces stay out of student residences in terms of section 14 [of the Constitution] — our right to privacy,” she continued.

A student at the protest provided the following video to the M&G, which includes the full list of immediate demands:

The #UKZN PMB students protested against rape and police violence today. There demands are: pic.twitter.com/3BlNpq2Ola

The students also said they want the private security officers from Mi7 to be immediately removed from campus and that the university has until the close of business today (Wednesday 7) to respond.

“We cannot continue living in an environment where our constitutionally entrenched rights are being violated by the people entrusted to enforce them,” the student said.

The memorandum was handed over to the cluster commander of SAPS for the region.