Cape Town, use prime municipal land in the heart of the city to house the poor 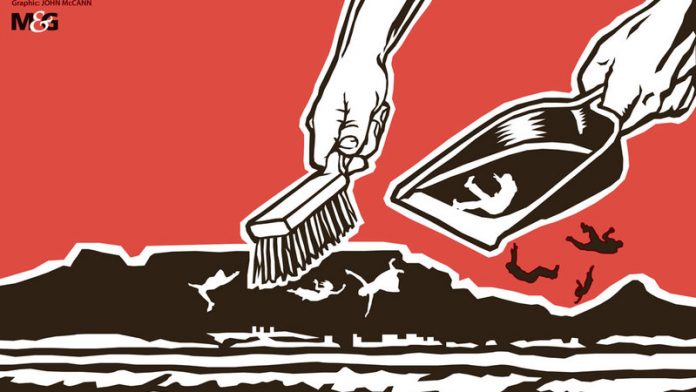 DEVELOPMENT
The City of Cape Town is about to dispose of a prime piece of inner-city land. Known as Site B and located on Lower Long Street on the Foreshore, it is currently a four-hectare, open-air parking lot surrounded by towering buildings. It is clearly underused as a public asset and selling such a property to the highest bidder is unacceptable.

Cape Town suffers from a dysfunctional urban phenomenon known as “inverse densification”. A largely poor and working-class black majority live on the urban periphery, in very densely populated settlements, far from jobs and with poor access to amenities and services.

Well-located central areas, most of which were previously designated “whites only” areas, are characterised by low densities coupled with an acute shortage of affordable housing options, despite excellent access to amenities, services and employment opportunities.

Inverse densification did not happen accidentally. About 60 000 people were forcefully removed from District Six alone during the 1960s and 1970s. This, according to the 2011 census, is almost exactly the number of the current residents of Cape Town’s two inner-city wards combined, comprising the city centre, the Bo-Kaap, Gardens, Tamboerskloof, Oranjezicht, Woodstock, Salt River, Observatory, Mowbray and Rosebank.

Schedule six of the Constitution challenges our society to build a bridge between a history characterised by division, suffering and injustice and a future founded on the recognition of human rights, democracy and development opportunities for all South Africans.

This should be at the centre of any decision that will materially shape the future of the city.

Cape Town mayor Patricia de Lille says that the disposal of Site B is in line with efforts to create an “opportunity city” by releasing immovable property not required for municipal purposes to stimulate economic activity, investment and job creation.

This rationale must be challenged. The onus is on the City of Cape Town to explain why prime public land is not required for municipal purposes in the midst of housing, segregation and restitution crises.

This land logic exposes a limited understanding of the value of land in securing broad-based growth. We need to move beyond simplistic trickle-down economics. Well-located, affordable housing, bringing workers closer to their place of work, is not only about welfare; it is a necessary public investment for the long-term economic sustainability of Cape Town.

The latest State of Cape Town Central City Report estimates conservatively that there is R8‑billion of property development planned for the city centre over the next five years. Furthermore, the nominal value of property in the city centre shot up by 26% between 2005-2006 and 2013-2014, from R6.127‑billion to R23.725‑billion.

Today, according to a Frank Knight report, at triple inflation, the growth of Cape Town’s property market is the third fastest in the world — behind Vancouver and Shanghai.

Can the city justify stripping public assets for short-term cash injections to drive economic growth in the city centre? Why haven’t we used this tremendous growth to secure affordable housing stock in the area — something done by “world-class” cities the world over?

Given our apartheid history and Cape Town’s frequently touted mantle of good governance, the city should be a global leader in fostering urban inclusion. Yet, in 22 years of democratic rule, not a single subsidised rental housing unit has been created in the inner city.

The affordability crisis also means eviction for many poor tenant families in traditionally working-class suburbs such as Salt River and Woodstock. Black working-class and poor people are forcibly relocated to the urban periphery and camps such as Blikkiesdorp and Wolwerivier.

Instead of mitigating against the markets’ exclusionary tendencies, the city is aggravating the situation by selling off parcels of prime public land.

The most obvious way to restructure Cape Town to bring more people back into the city and surrounds is to leverage publicly owned land to create affordable housing close to economic and social opportunity. This requires the government to release land below market value to meet its socioeconomic obligations. Not only is this possible, it is also mandated by the existing legislative and constitutional framework for restitution, as broadly defined by the principle of spatial justice.

As with many challenges South Africa faces, it is not policy or legislation that is missing, but political will. Instead of acknowledging the social value of land, the city fixates on its commercial value only. State-owned land is a scarce and finite asset and is also immensely valuable from a social, environmental and cultural point of view.

The city regularly uses the shortage of well-located land or the impossible expense of obtaining such land as the excuse for failing to provide affordable housing in central areas — yet at the same time, it’s selling what it has.

That some senior politicians in Cape Town, deputy mayor Ian Neilson and councillor Benedicta van Minnen for example, think that the desirability of affordable inner-city housing is still up for debate is alarming. But it isn’t surprising, given that Neilson argues that Langa is part of the “inner city” and Van Minnen claims that the human dumping ground of Wolwerivier is in line with spatial planning objectives because it’s in a “future growth corridor”.

Neilson claims that the Reclaim the City’s campaign demand for affordable housing is “oversimplified and ill informed”.

But these campaign demands, for the protection and promotion of well-located affordable housing with a current focus on the inner city and surrounds, happen to be grounded in the policy and legislation that should guide the city’s implementation of planning and housing strategies.

Cape Town’s urban exclusion crises are a result of “death by a thousand cuts”, when land desperately needed for housing and integration is sold off on an ad-hoc basis.

Add to this the sale in 2011 of a portion of land now occupied by the Portside building, Virgin Active next door to the South African Revenue Service in 2014 and the imminent disposal of Site B, and that is 10 sales within a 500m radius.

None of these disposals has contributed to affordable housing development either on-site or in the vicinity.

Although Portside was linked to the provision of housing, albeit in Khayelitsha, this contribution has yet to materialise some eight years down the line.

There are many more public land disposals in the inner city and surrounds that have gone ahead or are being lined up — whether for long-term lease or outright alienation.

At the controversial Western Cape Property Development Forum in 2015, De Lille announced that in addition to Site B, another 12 high-value properties would be released to the market.

These properties include land in Century City, Foreshore, the city centre, Green Point, Clifton and the Strand Street Quarry in the Bo-Kaap.

This must be considered alongside the four substantial properties the provincial government aims to dispose of through its regeneration programme — Tafelberg in Sea Point, Helen Bowden Nurses’ Home in Green Point, and the Alfred Street Complex and Top Yard in the city centre.

If we turn the clock further back, we see that, of the 150 hectares of land that once made up District Six, only 40 hectares of publicly owned vacant land remain.

The scandal to do with Gary Fisher, who wears two caps as a public official in provincial government and a real estate mogul, and his substantial personal interests in the disposal of the Tafelberg site, is one such example.

That developers and property investors have increasing influence in the shaping of our city should be a cause for concern.

Remember that, whenever you have shortages, you have big corruption risks. One has to ask: Who are the gatekeepers of these resources, and how are they being allotted?

Meanwhile, in the face of all this there is no holistic plan linking government-owned land to its socioeconomic objectives. Soon there will be no land left to create the Cape Town our Constitution demands. — groundup.org.za

Julian Seldin is a researcher at Ndifuna Ukwazi, a trust that aims to build and support social justice organisations and leaders.