​MSF: We don’t care which side you’re on. We’re here to save your life 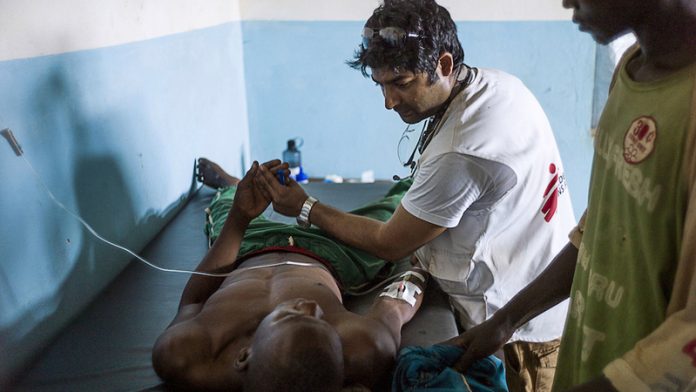 We are Doctors Without Borders (MSF) and we care that we’re able to provide urgent life-saving medical care no matter who you are, where you are or what you have done. We care about fighting the virus wreaking havoc in your body and curbing the spread of infection communities. We care about stopping the bleeding from gunshot and blast wounds. We care about saving your life – not how you choose to live it.

Humanitarianism is not about being a bleeding heart do-gooder with talk of the long-term impacts of policy change inside boardrooms or in corridors of power.

It’s about saving lives and alleviating suffering by acting decisively – independently, without hesitation or delay. Medical humanitarians do not have their heads in the clouds striving to bring agenda-free healthcare to people in crises. Their feet are planted firmly in the messy, pragmatic reality on the ground because it implies taking calculated risks and making tough decisions based on firm principles.

The fact is that outside the circle of pundits – commentators that make up the so-called politically active and socially concerned – ordinary South Africans remain largely unfamiliar and unengaged with humanitarian action on an international scale. Our polls in recent years suggest that just over 50% of South Africans recognise international humanitarian actors. This is not an indictment – on the contrary it’s a baffling riddle considering that ours is a society built on the principles of Ubuntu and seeking to protect and nurture humanity common in all the world’s people.

Last month, Doctors Without Borders (MSF) launched an awareness campaign to provoke South Africans to consider humanitarian values: independence, impartiality and neutrality. Our campaign tells you that we don’t care about the challenges or definitions that obstruct providing or accessing medical care. By disrupting convention we hope to share with you the compelling principles of humanitarian action to awaken your awareness. As a medical organisation working in 69 countries around the world – many of them conflict zones – treating 8-million to 9-million patients every year, we have seen the risk of operating in places where humanitarian principles are not understood, twisted or increasingly ignored.

Last year 42 of our patients and colleagues were killed when MSF’s trauma care hospital in Kunduz, Afghanistan, was destroyed in an attack by a US military warplane. During 2015, a total of 75 hospitals directly managed by MSF or supported by us came under attack in Syria, Yemen, Ukraine, Afghanistan and Sudan. So clearly, what you don’t know can kill our patients and staff. This is the silence of ignorance. This is the silence that kills.

It is the same deafening silence when people with multi-drug resistant tuberculosis (MDR-TB) suffer the terrible side-effects of 50 year old drugs because doctors don’t have a choice of better medicines. It is the silent inaction in the face of needless Ebola deaths when the world looks on for months as Guinea, Liberia and Sierra Leone were decimated before reacting for fear of it becoming an international security threat.

As Doctors Without Borders (MSF) we reach out to people during conflicts, natural disasters, epidemics and when they are excluded from healthcare – driven solely by medical criteria and independent from any powers. As our name suggests this is not a contented action neatly hemmed in by lines on a map; national identity expressed in flags, or anthems. It is not conditional to which side of the frontline you are on, the politics of the day, or shifting allegiances painting a woman or man as freedom fighter today and terrorist the next.

Our medics treat a war-wounded fighter with the same unquestioning compassion as we do the woman who needs to give birth safely or child hurt in a traffic accident. We provide medical aid because human beings come first.

We are able to do this because 5.4-million people worldwide, among whom 25 000 South Africans, choose to take a stand for humanity in supporting our impartial and neutral medical work with regular donations, small or large. This keeps our action free from the political agendas prescribing whose lives are worth saving and who can be snuffed out. It enables us to react with the urgency required to save lives within 72 hours of a massive earthquake in Nepal or to take on an Ebola outbreak spiralling out of control.

But when Mrs Dhludhlu donates R100 to MSF we can assure her that more than 80% goes toward getting Dr Kahn to treat a MDR-TB patient in a Ukrainian prison, or providing nurse Kibasombo rubber gloves and a malaria test kit for the Burundian refugee in Tanzania, or the stethoscope and scalpel Dr Kruger uses in our hospital in Afghanistan. The rest covers administration and fundraising costs.

Doctors Without Borders (MSF) is telling you what we don’t care about and asking if you care about the same values – because humanity should not be held ransom by the deadly silence boundaries impose.

Dan Sermand is the interim General Director of MSF