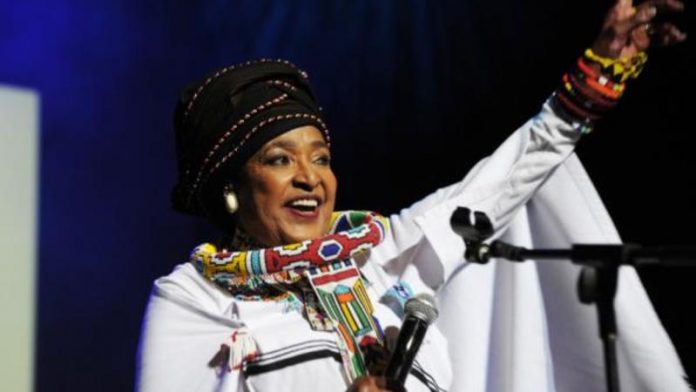 There is something transcendent about singing in communion. Different pitches in unison. In harmony. Voices tease, hide, come out and play. In a place of worship hymns’ cadences can carry. Shift the spirit. Urge a humility that is divine. It is the same with songs of struggle. When voices singing in sense and in sync convene.  Winnie Madikizela-Mandela was born on September 26 1936. She had an early birthday celebration at the Artscape, in the Mother City’s CBD. The audience was dominated by melanin on a palette of its various shades. Dressed in garb that ranged from traditional wear, to beaded accents, and luscious faux fur. And the men came suited up with the kick-and-bhoboza standard.

Scheduled to start at 19:30, the voice on the intercom summoned guests to their seats. There was an anticipatory din. Fifty minutes later when a lone audience member started clapping in an attempt to prompt the show’s start. The spark resulted in a flicker of applause which waned as immediately as a firecracker. And then a thing that often happens when Black people congregate, someone lead with a song and a Mexican wave of harmony ignited.

Malibongw’igama leNkosi had a struggle song timbre. Slow. Strong. It was accompanied by rhythmic clapping, ululations, and whistles. It was a half-an-hour later when the Mother of the Nation, Winnie Madikizela-Mandela, ANC stalwart was ushered in. She was a power that resonated. Volcanic. The audience erupted. And now that she was within eyeshot. Visible. Some fortunate enough to distinguish her scent. The songs came with more fervour.

Asiphelelanga kushot’uWinnie – a channelled chant that morphed into a cheer. She received the reception of a rock star. The audience had waited for music icons Letta Mbulu and Caiphus Semenya to start the show. Now the musicians would wait. Ngubani obethe sizolala la?

The spirit of the evening undulated. A video screening; a synopsis of Madiba’s second wife and the role she played in the struggle, her contribution and sacrifice were projected on the upstage wall. A scene with her in soldier’s camouflage brought about growling, guttural things and ululations from the audience.

Renowned radio personality Shado Twala was the honoured MC who introduced the theatre’s chief executive Marlene le Roux. She came out in vigour; fist up demanding the audience’s reciprocity when she chanted: “Malibongwe” and received the requisite response: “Igama lama khosikazi.”Commenting in another interview le Roux had said, “Artscape has become a cultural centre and it’s only fitting it host Mama Winnie’s celebrations.”

On stage she added: The board of Artscape wants to make you a lifetime patron. We as South Africans, as Africans need to look at your leadership as iconic, equality-driven, and justice-promoting. A statement received cheers.

Zondwa Mandela her grandson also came onto the stage to share some words: “Makhulu, we love you. We thank you for your sacrifice. We will never forget the sacrifices you made for this country.”

Eventually, the woman who filled an auditorium to capacity made her way onto to stage. The energy was fiery, uncontainable. And there she was. Regal. Exquisite inumbhaco; the multi-layered butcher linen with meticulous binding with bead and chime-bell detail. The sturdy cloth, usually worn by a woman who has undergone the ceremony of marriage and borne children is refashioned with various adjustments when worn by younger, often unmarried women. Mama’s garment delineated this with its strata; the skirts, the top, the jacket, the streams of beaded necklaces and bracelets.

Iqhiya was a black, dense cloth wrapped around her head. Shaping it into form is always a task; big-headed, often colourful pins holding and tucking the material in place. The task is often such laborious process that once removed from the head it’s often stored in this shape, like a hat awaiting the next occasion.

Her voice charred and coarse she let out an evocation; an old dream she was part of turning into fruition singing in vernac: The timbre of the women will be heard as they enter parliament. Madikizela-Mandela enjoyed her time on stage. Revelled in it while the audience revered her. She had quips about the EFF; claiming that their tricks and games have not gone unnoticed. This brought about roaring laughter. And then, without skipping a beat she offered: “Viva ANC. Viva Cosatu. Viva EFF!”

It was an hour-and-a-half after the show was scheduled to start that the keyboard started up with a high-pitched repetitive rhythm. The base got involved and the electric guitar riffed its addition. The drums, previously not there, not keeping time followed their cue and came to solidify the moment. To guide. And then Letta skats and growls; swinging between melody and gruff. And Caiphus plays with fire.

It’s hard to build a credible opposition. Ask the Nigerians

Malema’s dreams of kingmaker, or even king

In a leaked recording during Saturday’s ANC national executive committee meeting, Mathabatha said he has observed ‘comrades who run around purporting to be the defenders of our president’.
Advertising