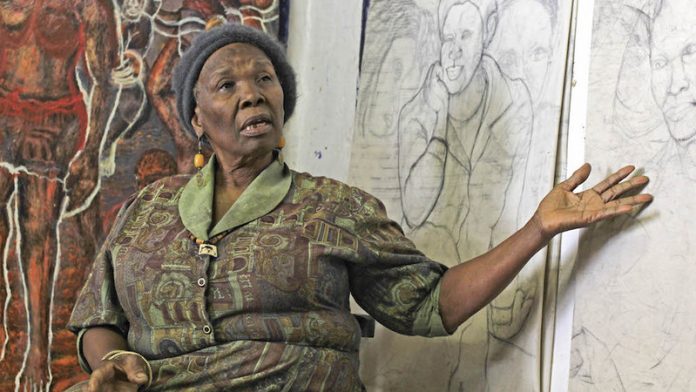 “Culturally, when you would be given a name, you’d be given the name of a hardworking person in the hopes that you would contribute to the society as they did, or even surpass them,” says fine artist Mmakgabo Mmapula Helen Sebidi.

Although Sebidi did not inherit her maternal grandmother’s names, Mmakgabo, which means “keeper of the flame”, alludes to her progenitor’s passion for vocational labour.

More than the work itself, Sebidi’s grandmother taught her the philosophical underpinnings of such labour and its importance in community building. Today, Sebidi’s artwork is concerned with the restoration of moral values or, perhaps more accurately, the principles that shaped societies in precolonial Africa.

Mmakgabo Helen Sebidi – An exhibition of paintings and prints, on at the Michaelis Galleries at the University of Cape Town until October 14, largely draws on They Are Greeting, a collection of paintings, prints and sculpture that opened at the Everard Read gallery in May this year and which explores work emanating from her latter oeuvre.

This phase of Sebidi’s career is marked by a return to representational art but always with flourishes she picked up along the way. The works have a decided twist of abstraction and surrealism that defined much of her work in the 1980s.

In the 1960s and still a teenager, Sebidi became a domestic worker like her mother. Estranged from her mother and her mother’s husband, Sebidi turned to sewing and knitting but it wasn’t until meeting Heidi Petsch, the artistic wife of her German diplomat employer, that she began taking art more seriously.

After her shifts, Sebidi would work on artworks for several hours before sleeping and again after rising.

Petsch was something of an enabler who spurred Sebidi to pursue formal training. “I am the type of person who can learn everything by watching. I’d copy everything the German’s wife did – tie-dye, batik, paintings,” she recalls. “I’d take them and hang them on the wall next to hers. Initially she ignored me.”

A chance encounter with the painter and founder of the White Studio, Jonathan Koenakeefe Mohl, led to Sebidi pursuing art lessons at Dorkay House.

Sensing her potential but also taking in the rawness of her work, Mohl encouraged Sebidi to draw from her ancestral lineage and regarded Sebidi’s grandmother’s illness in the mid-1970s, which forced the artist back to Marapyane for an extended period, as a blessing in disguise. “It’s not your grandmother who is ill, it is you,” Mohl told her.

For Sebidi, the period from the 1970s to the early 1980s (when her grandmother eventually died) proved useful. “The woman spoke to me about all that had happened in history – wars and other things. My grandmother also allowed me to work in secret, so that no one could interrupt me.”

Striking up a relationship with Bill Ainslie, artist and founder of several art training projects, and artist and social commentator David Koloane, Sebidi’s work moved into the realm of abstraction, though it still retained figurative elements. Her figures were drawn from both mythology and the imagination.

Two seminal works produced in this period are the charcoal-based mixed-media Miracle (1987) and Tears of Africa (1988), which typify her predilection for contorted, cramped figures with distorted or multiplied features and faces sometimes meeting at right angles.

As the recipient of the 1989 Standard Bank Young Artist Award, it seems Sebidi had been working on a language to fully express the trauma of oppression and the dehumanising nature of all that she had seen.

Her figures usually have different coloured eyes denoting the duality of people whose spirits have been altered by extraneous physical circumstances.

The presence of animals, some of them totemic, expands on this idea of duality, with the birds sometimes occupying the role of spirit guides.

Describing her own technique, Sebidi says: “When I do a painting I like to streamline them, maybe doing six to eight works concurrently. But the sketches take a while to move from sketch to painting.”

She refers to this period of labour as “one of extended joy”, during which the free-spiritedness of precognitive techniques and more deliberate drawing can lead to endless new paths of discovery.

The works collected as They Are Greeting show Sebidi not only to be concerned about the preservation of cultural practices but also about fostering an understanding of the rationale of specific practices.

For the most part, Sebidi avoids the urban setting, or the suggestion of such settings, with her colour palette evoking societies not yet fractured by the colonial encounter.

The oil painting The First Wife Has Chosen a Bride Sister is one such work, depicting a husband meeting his second bride, sought out by the first wife. The children in the background look on, each accompanied by an animal.

Where Sebidi displays modernity, it is often disparaging, such as in The Spirit Bird Fleeing the Modern World. Here a spirit bird flees the world of adults, leaving multicoloured feathers in its wake. The feathers, representing the material world, seem to fall near the adults, who are seemingly oblivious to the bird’s escape.

In Destroyed People Trying to Face the World, Sebidi seems to be commenting on the corruptive nature of cultural imperialism. In The Traditional Lovers, two lovers are depicted on an unlikely island where a pastoral landscape unfurls behind them. They are separated from the land by a body of water and a windmill in the background seems to speak of changing times.

Much of They Are Greeting is about the upholding of tradition and in Sebidi’s world it is women who keep those traditions intact. “In fact, everything functional in the home was provided by women,” she says.

By foregrounding the role of women, Sebidi’s work is perhaps less nostalgic and has more to do with an imagined future where lives can be configured anew.

Works such as The Modern Mother seem to depict dual scenarios: men emasculated by petty discriminatory laws or women who have to pick up the slack of such a fate and lead from the front.

Either way, Sebidi’s version of the present, filtered through the past, sounds like a future worth waiting for.

To reckon with Winnie’s ghost