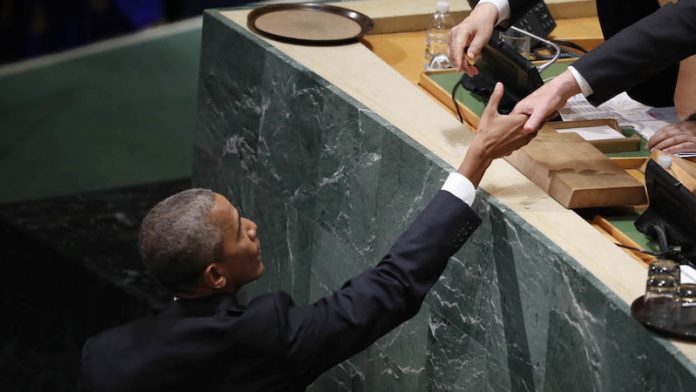 COMMENT
It’s like David Beckham meets Luis Suarez. Out of all the speakers at the United Nations General Assembly this week, United States President Barack Obama and Turkish President Recep Tayyip Erdogan stood out with their contrasted worldviews and styles.

He’s preoccupied with his legacy and far more interested in looking good than in scoring points. He’s above the fray, tired of all the tackling and kicking and just wants everyone to get along.

So, in his last speech to the United Nations, the US president spoke in historical rather than political terms, lecturing the world body about the blessings of free trade, technology and globalisation, and warning against “aggressive nationalism” and “crude populism”.

If there was no place for the Middle East tragedies in Obama’s panorama, the in-your-face Turkish president made the Syria, Iraqi and Palestinian tragedies central to his speech.

Erdogan’s was an outright diplomatic offensive; he scored points against the hypocrisy of the West and the negligence of the rest at the UN Security Council.

Since the failed military coup against his government, he’s clearly in no mood to play with those ignoring the plight of those in the Middle East and seems ready to bite off the heads of those messing with Turkey.

Obama and Erdogan presented different perspectives, but weren’t necessarily playing for opposite teams. It is the sobering glass-half-empty argument completing the glass-half-full picture.

And yet, seen from the Middle East, and indeed from the rest of the world, Obama’s claim that the world is in far better shape today than during the 20th century’s world wars, though not incorrect, smacks of sloppiness and indifference.

He knows better than most that, even in the US, his promise to bridge the gap between blacks and whites, red states and blue states, and pull the US out of Iraq and Afghanistan have led to more — not less — racial and ideological tensions.

And he has expanded the landscape of military conflict, albeit with less US troops in the Middle East.

He spoke of accountability, but not a single banker or politician was held accountable for the financial crisis and the illegal war in Iraq during his tenure.

In comparison with 20, 15, 10 and even five years ago, the world continues to heat up and it’s not just global warming. Despite much progress over the past half-a-century, the international political pressure cooker is gathering steam and there’s no cooling down.

I’ve witnessed this first hand over the past few years, travelling through different continents, countries and communities. I spoke to countless people but found little optimism and much scepticism about the future.

The enthusiasm that followed WWII, the liberation from colonialism, the end of the Cold War, the expansion of democracy and the various popular upheavals in Asia, Africa, Latin America and the Middle East has diminished if not vanished altogether.

It’s a big mess out there: loss of compass, absence of leadership and little or nothing to believe in. To quote the eminent Irish poet WB Yates: “The best lack all conviction, while the worst are full of passionate intensity.”

All of which raises the question: What’s next for a world in trouble? Because it feels like the rise of aggressive nationalism in the beginning of the 21st century is looking more and more like that of the early 20th century — the same century that gave us some of history’s worst atrocities from world wars to colonial wars.

The establishment of the United Nations and the creation and independence of new states that make up the majority of today’s UN were supposed to usher in a more humane and equitable phase in human development.

But the Cold War between the Soviet Union and the US brought us nuclear proliferation, proxy wars and the clash of ideologies that exerted a huge cost on human development. The end of that hot Cold War should have been another cause of celebration.

But the wars in the Middle East, the Balkans, Somalia, Angola and Rwanda cast much pessimism as “never again” was repeated again and again, not only in Germany but throughout the world, especially in Syria, Iraq and the greater Middle East, where millions of civilians died in the process.

And yet, people looked forward to the expansion of democracies and human rights in their societies.

Eastern Europe was freed from Soviet totalitarianism and client regimes; Latin America freed itself from US domination and client autocrats; and Africa began to find its way to representative government. Even the Arab world followed suit in 2011.

But as ideologies such as communism, which inspired people, failed to meet the challenges and peoples’ needs in the 20th century, the triumphant Western liberalism opened the 21st century with horrific wars and a global financial crisis.

Throughout Europe and the US, inequality has skyrocketed, middle classes are suffering and racism is mounting.

The past few years have witnessed the retreat of democracy, the return of autocracy and the rise of popular nationalism. To paraphrase the words of the UN general secretary, citizens distrust their leaders in a world of “us versus them”.

But there was always a vision of sorts, a promise of better things to come — but not this day.

Countries big and small seem to embrace, coercively or willingly, demagogic populism and nationalistic autocrats — from the rise of Russia’s Vladimir Putin and the ascendance of China’s Xi Jinping to the election of India’s Narendra Modi and even the Philippines’ Rodrigo Duarte.

In Latin America, leftist leaders have failed to meet peoples’ expectations. The Bolivarian revolution is on its knees in much of Central America as Brazil, Argentina and other Latin American nations suffer from corruption and misrepresentation.

Western Europe and the US aren’t spared by the waves of nationalist populism as the radical right continues to make major strides.

These trends are not ideological with coherent worldviews; rather they’re voiced in empty slogans and even 140-character tweets about Islam and defeating the evil (Islamists, immigrants and minorities) that is bent on ruining the glorious (Christian) Western civilisation.

It must be said, love him or hate him, we will miss Obama once his successor takes over in a few months, just as Erdogan would have been missed had he been removed by the attempted military coup. It’s both their blessing and their curse that their immediate alternatives don’t look so promising.

If there’s a judgment or comparison to be made, it’s certainly not between Obama and Erdogan. It’s rather between Erdogan and his neighbours, and between Turkey and other developing and developed nations.

And the comparison is between Obama and Putin, and the US and China, over who provides a better vision for the future.

Unfortunately, the Russian and Chinese alternatives to US leadership (imperial or otherwise) are lacking at best, and at times scary.

There is no point in searching for — or looking up to — the “one-der” leader or visionary. Not today, not ever. Certainly not in the real world. Progress comes through collective, civilisational and generational struggle that is earned tooth and nail.

Fortunately, as the US president argued, the new generation is better than his generation. But not when it’s subject to war, violence, racism and alienation. They are more likely to end up in prison or as potential recruits for criminal and violent groups than be community organisers and enlightened leaders.

And yet, even in times of war and conflict, we see countless youth sacrificing their lives and freedom for the lives and freedom of others. One such silver lining appeared in Syria’s dark days, called the White Helmets.

If only political leaders would rise to the level of their peoples’ sacrifice, if only they would stop sacrificing people for their own personal glory, the world would be a far better place.

If only the UN secretary general could act like a referee and start slapping down each and every one of these rogue political players with the yellow and red cards they deserve. — Al Jazeera/News24wire

Marwan Bishara is the senior political analyst at Al Jazeera.