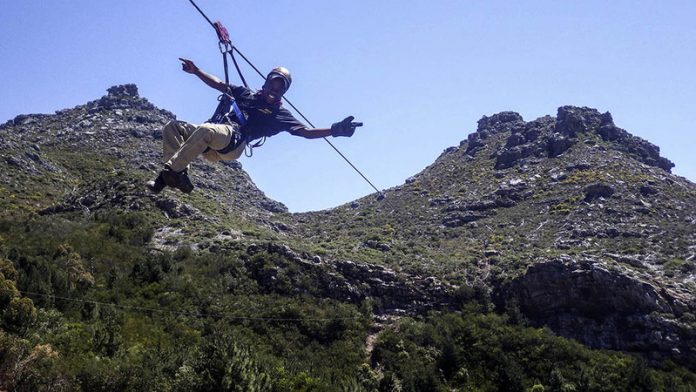 For a few months at least, those holidaying in the R4 000 a night lodge will be spared the bellows of the R550-a-head excursionists as they foefie slide their way across Constantia Nek.

After that, the shouting will move into the chambers of the City of Cape Town as residents of a high-toned estate fight to keep the day-trippers from intruding on their tranquillity.

On Monday October 3, Cape Town Ziplines will shut down indefinitely, ending nearly two years of operation. Once marketed as “one of Africa’s longest zipline tours”, and a favourite of lists such as “11 Extreme Sports to Get Your Adrenaline Pumping in Cape Town”, the attraction fell afoul of bureaucracy of the most mundane sort: zoning rules and municipal bylaws.

This made for a Cape Town high court judgment on Friday that described an adventure sport in terms rarely adopted by marketers. “It is declared that the carrying on … of the activity of conveying people on aerial cables known as ziplines … contravenes the zoning restrictions currently applicable,” said Judge Owen Rogers.

The resulting shutdown will be a short one while the company deals with some missed paperwork, zipline operator Clinton Lerm said this week.

“We’re running a municipal process [for rezoning] now and we’re quite positive about it,” Lerm said. “We’re in a tourism hub here; we’ll get the municipal approval without trouble.”

But trouble is very much in the offing, differed attorney André Nel of Springer-Nel Attorneys, which will be acting for residents of the Silvermist Mountain estate development, high on the forested slopes of Table Mountain.

“We’ll definitely be opposing this all the way,” Nel said. “There are definitely huge problems with this application.”

Technical legal troubles aside – and those could well stop the entire rezoning process without further evaluation, said Nel – the City of Cape Town will be left with a thorny problem: Is the shouting of people having a really good time a nuisance? If so, does that nuisance, suffered by nearby homeowners and lodge operators, outweigh the need to give tourists a place to spend more of their money?

Cape Town Ziplines started operating in November 2014 after spending what it said at the time was R1.2-million to develop a unique attraction. Lerm now puts the costs at R2-million.

“It will make you gasp for air,” Lerm told a magazine during one promotion.

Gasping was not the only sound. “It is entirely natural that visitors will whoop with delight, shriek in actual or feigned terror and shout to their friends,” Rogers said in his judgment on Friday.

That is the point. The experience will get “the vocal cords loose”, advertising material promised.

Lorna King’s tourist guests, on the other hand, were promised a “retreat”, one “suitable for the most discerning traveller searching for a peaceful environment”, one that is “serene”.

The Mbali Lodge in the Silvermist Mountain estate that King was describing in these terms is just down the way from the zipline operation – and the two were never going to cohabit in harmony.

She bought a house in the Silvermist estate in 2009 as a holiday home, King told the court. She is originally from South Africa but now lives in the United Kingdom and only uses the house a few weeks a year. The rest of the time she offers it for short-stay rental, and her renters were less than amused.

A couple of months after the zipline operation started – having been constructed essentially in secret – King started making enquiries. She had experienced “the noise and breach of privacy” herself and her foreign guests had complained, she told the court.

During the course of 2015, King and Lerm duelled with reports from acoustic experts on just how much noise the ziplines created.

But noise need not be dealt with just yet, Rogers ruled. Because the zipline operator had not sorted out the zoning, it could not continue in any event. Only once the properties involved had been rezoned to allow such entertainment would be it be necessary for King – and some of her fellow residents – to “seek a further interdict on the grounds of alleged noise”.

If they do seek such an interdict, the argument will be complex. In terms of some regulations the “unamplified human voice” is excluded from noise limits, but running a business designed to make people shriek can still fall foul of common law restrictions on nuisance.

The banks that provided bonds on houses that would be devalued because of such a nuisance are highly unlikely to sign off on the planning permission necessary to make the zipline legal again, said Nel.

“We are actually quite confident that this application will never be approved,” he said.

He can wait for the necessary processes, Lerm said. His tourism operation, which includes renting out quad bikes and other ziplines, is “quite big”. His permanent staff of eight and about 13 other temporary employees, on the other hand, were still looking for places elsewhere in the local tourist apparatus.

“For me, they are the real losers,” Lerm said.