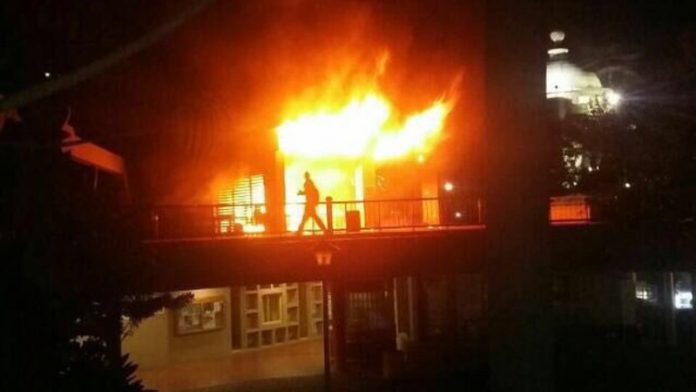 Academics have been accused of secretly plotting with students in a deliberate attempt to destabilise higher education institutions.

Impeccable sources at the University of KwaZulu-Natal (UKZN) said they had first-hand knowledge of a group of academics calling meetings with students to organise protest action for the week ahead.

UKZN sources also confirmed that an academic had assaulted a security official who was trying to arrest one of the protesters.

“They [academics] are part of the problem. They are definitely assisting students to destabilise the institution,” one source said.

A UKZN academic is said to have arranged with the university’s administration staff to hire a lecture hall so that students could use it to plan their protests.

Some academics and cleaners had worked together this week to organise a march, the sources said.

On Thursday, UKZN security received a report that 20 staff members dressed as priests were singing religious hymns on Golf Road in Pietermaritzburg as they moved towards the university campus.

UKZN spokesperson Lesiba Seshoka confirmed that the university had received information about academics and students working together to protest, and was investigating the matter.

In a week when several universities were forced to close down indefinitely because of violent student protests, Seshoka had harsh words for the country’s State Security Agency.

The Academic Staff Association of Wits University (Asawu) said it was not aware of any academic at the University of the Witwatersrand who was supporting violent behaviour or engaged in anything nefarious.

Asawu confirmed that some academics who supported the call for free higher education were helping students with tactics to use in peaceful protests and were also providing food and donating money for transport to venues where protests were taking place.

Mpho Morolane, national president of the Economic Freedom Fighters’ student command, said he had not heard of academics colluding with students to destabilise universities. “We are working with them [academics]. They are part of the community and identify themselves with the struggle. Therefore, we are with them.”

The South African Union of Students (SAUS) has also urged the minister of state security, David Mahlobo, to “up his game”.

SAUS president Avela Mjajubana said, if there was an issue with academics “fuelling” the protests, the department should use its expertise.

Nicholas Nyati, president of the student representative council at NMMU, said he had heard people “whispering” about academics helping students to instigate unrest but “we haven’t really seen anything that we can say: ‘Ja, we saw them doing it.’ ” But he was not referring to NMMU academics.

David Hornsby, an associate professor in international relations at Wits and president of Asawu, said some academics were providing “intellectual guidance and support” to students about social movements and how protest manifestations work in relation to broader societal questions.

He said these academics were creating spaces for discussion and were advising students about effecting change and applying pressure in a peaceful way on government and public officials.

Urgent initiatives by the university community to end the shutdown of several institutions countrywide include:

• A poll among students and staff at Wits to gauge whether they wanted classes to resume next week;

• A meeting of Universities South Africa, which represents the vice-chancellors of the country’s 26 universities, on Thursday;

• A plea by University of Cape Town (UCT) vice-chancellor Max Price to students to support the reopening of the campus on Monday; and

• A mass meeting at Nelson Mandela Metropolitan University (NMMU) on Saturday to find ways of resolving the issue.

Members of Asawu were due to hold a peaceful demonstration outside the Wits Great Hall on Friday to support the call for increased public funding for higher education and the removal of security officials and police from campus.

UCT spokesperson Elijah Moholola said all members of the campus community, regardless of their political position or social justice commitments, had been asked to refrain from promoting a shutdown.

“We urge all students, staff and other stakeholders not to support the shutdown or participate in disruptions, whether physically, on social media or in any other way.”

Brian Dube, spokesperson for the State Security Agency, described UKZN and the SAUS’s criticism as a knee-jerk reaction, adding: “The entire security cluster of government has been working and continues to work with the department of higher education and other relevant government structures on this matter. There has always been a co-ordinated effort in which we have provided briefings to the relevant structures of government, including Cabinet, so we have done what is expected of us — and we continue to do so.”