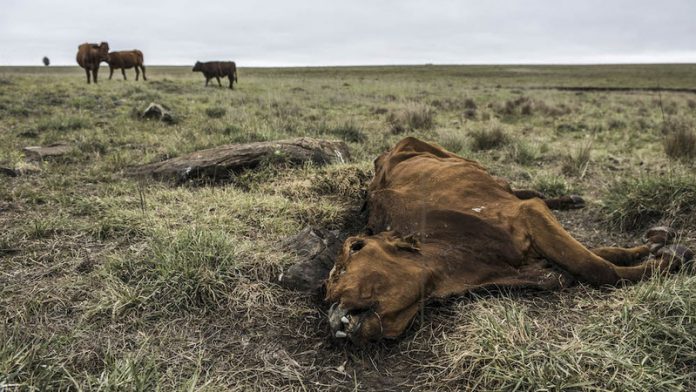 Your water doesn’t come from a tap. If you live in one of South Africa’s big cities – which you probably are because you are reading this – it comes from people making sacrifices somewhere far away.

Far away enough that you don’t have to face their reality. That’s why people continue to have green lawns and swimming pools, even though the country is dancing around the prospect of a third year of drought.

That’s why Johannesburg Water and other utilities have to threaten fines in order to get people to conserve water. The concept that we live in a water scarce, or semi arid, country seems to be completely missed by the middle and upper class of South Africa.

If your lawn is green, you are taking water away from people who now have to slaughter their cattle or find a way to eat less maize. But you can get away with it, because you can afford to just pay more for water.

National government gives 6 000-litres of free water to homes each month. That’s calculated to be enough to cover basic access.

Middle class homes in big metros use up to 30 000-litres a month. Most of this water comes from a fantastic storage network, built over decades to ensure that South Africa can survive droughts.

A handful of dams around Lesotho catch and store water, giving the provinces around them a buffer for the usual two-year drought cycles that the country experiences.

This week, the Mail & Guardian reports on the extra arm to that storage network – Lesotho. Starting in 1986, the small mountain kingdom has had its valleys dammed and turned into reservoirs. The billions of litres of water that fall on its high peaks are collected and then sent to South Africa.

That water is the reason the current drought has not broken South Africa.

But the Vaal Dam – where the water ends up – is now at 30% storage capacity. The rainy season for 2016 is late and the South African Weather Service is loathe to predict any serious rainfall coming before Christmas. That’s why water utilities in Gauteng have implemented water restrictions. They need to lower consumption by 15%, or face water blackouts.

Water sacrifices in Lesotho are the only reason you can still continually get water out of your tap.

In exchange, the income for selling water generates 10% of that country’s government coffers. This, it says, means schools can be built and development can be rolled out into the rural areas around dams such as Katse.

People living there tell the M&G that development is far off. New roads and electricity infrastructure have been built, so that developers could build the dams.

In the village of Katse, next to the 185m tall wall of its namesake dam, a reservoir was built so low down in the village that it only provides water to one tap. That tap supplies the whole community with water, so people trek for kilometres with buckets to collect water every day.

That water keeps their cattle alive. But it does little for the grass the now emaciated cattle need to survive. No significant rain has fallen since late 2013. It also does little for maize crops in the area – most of Lesotho’s agriculture is rain fed so depends entirely on drops falling from the sky.

Another year of drought looms. Farmers around Katse have started ploughing their fields, in the hope that it does rain. Those rains are already two months late.

The World Food Programme says at least 700 000 people in Lesotho need food assistance through to April 2017. This is while billions of litres of water flow out of the country.

The water you take for granted and waste comes at a high cost. Value it.

#WhyThisMatters is a weekly series which provides insightful, critical analysis