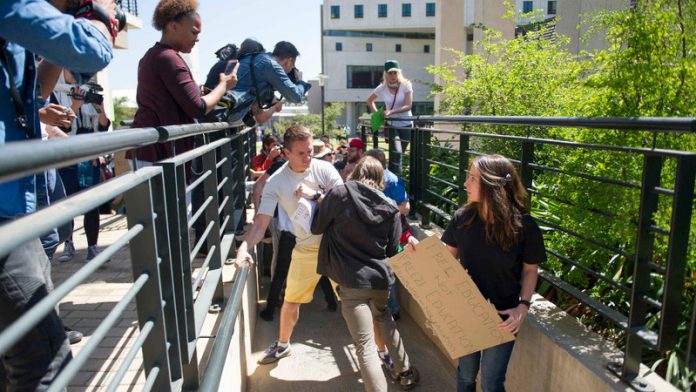 Protests at South Africa’s universities didn’t suddenly start in 2015 with the “ fees must fall” movement. Students at poorer institutions that cater almost exclusively for black students such as the Cape Peninsula University of Technology , Fort Hare University and the Tshwane University of Technology have been protesting routinely against rising fees and the cost of higher education since 1994.

But their protest action was largely ignored and often didn’t make headlines beyond regional newspapers.

The most recent “fees must fall” protests have involved students from both historically advantaged and historically disadvantaged universities. They have attracted widespread media coverage and have sparked solidarity protests in London and New York.

We believe that apartheid-era inequalities have not been addressed or removed. In fact, decisions taken since the end of apartheid have entrenched inequalities. The most far-reaching of these was the merger process, which was meant to level the academic playing fields. It was hoped that mergers would improve historically black universities’ research and graduate output and give them access to better infrastructure and systems.

But we’d argue that the mergers actually deepened inequality and explains why the cries of students at historically black, disadvantaged universities are ignored while their middle-class counterparts garner so much attention.

Why mergers were thought to be a good idea

The ministry of education’s 2001 National Plan for Higher Education was designed to redress past inequalities. Its aims were to:

The push for transformation took on a physical aspect. Public institutions of higher education were merged, reducing the number from 36 to 23. Three new ones have been created since, taking the number to 26.

The mergers, which were hotly debated and widely criticised, sought to unify the fragmented higher education system inherited from the apartheid government. It was hoped the process would address the system’s profound inequalities.

More than a decade on, the mergers’ effects have become clear. There have been some positive spin-offs, such as chances for greater collaboration between different disciplines. Successful mergers can bring people together, get them talking and bolster the country’s democratisation agenda.

But sadly, the negatives have outweighed the positives.

The gap is widening

Student enrolments at historically disadvantaged – black – universities have dwindled. Students have flocked to the better resourced, historically advantaged – white – institutions. This was already happening in the decade immediately after apartheid, but was exacerbated by the mergers.

A process that was supposed to redress past inequalities has had the effect of entrenching them, and in some cases widening them.

This needn’t be the case. We have argued that mergers could lead to substantial better access and greater differentiation in course offerings to cater for diverse students. But this would require taking a different approach to the current corporatisation model.

It would demand that those who design education policy and run institutions be open to critique, and open to unexplored ways of thinking and pursuing knowledge. This kind of leadership would be more able to recognise a university’s responsibility in relation to society.

We think now is the time to be open to ideas which no longer consider universities as places that produce “technicians of learning”. The time to simply produce technically competent graduates who can get jobs but who do not think critically about their world and themselves is long past. It is the moment to pave the way for cultivating communities of thinking. Students need to be encouraged to think more about their work in relation to how societal injustices can be remedied.

Educational philosopher Steven Burik argues that critique is a matter of enhancing the possibility of dissent and the diversity of interpretations. It involves complicating what is taken for granted and pointing to what has been overlooked in establishing identities. Crucially, it is an active opening up of one’s own thought structures that is necessary for other ways to find an entrance.

Educational leaders must, now more than ever, be bold. They must do the unthinkable and remain open to possibilities perhaps not yet explored. This also means they should be open to being questioned and challenged – a matter of being provoked to think differently in relation to the challenges of our time.

African elephants use ‘pachyderm perfume’ to send messages to each other

Slice of life: ‘Feeding the homeless saved me’