Caesarean vs vaginal birth: A mother’s choice, not her doctor’s

On a Sunday morning in Johannesburg in June, a heavily pregnant Zodwa Mahlangu* woke up planning to go to church. Mahlangu was not due to have her baby for another week.

But on that winter’s morning, she discovered she was bleeding.

Mahlangu, who was 23 years old at the time, immediately phoned her midwife, who instructed her to monitor the bleeding and keep her informed of any new developments.

“I knew that the baby was coming. So, I told my partner and my friend who I asked to film the birth,” she recalls.

As the evening progressed, her contractions started and gradually intensified overnight.

“I could not sleep. I was exhausted,” she says. “Eventually, on the Monday morning we made our way to the birthing centre.”

Mahlangu had planned for a water birth at a private birthing clinic.

When she arrived at the facility, the midwife examined Mahlangu and called her doula, a birthing companion who gives emotional and psychological support to women in labour.

As her contractions got stronger, Mahlangu wanted to give up.

“I was in a lot of pain,” she remembers. “I told my doula that I couldn’t take it anymore.”

Caesarean sections can be dangerous
The advantages of a vaginal birth outweigh those of a C-section, research has shown. According to a 2013 study published in the journal Obstetrics and Gynecology, elective Caesarean sections can result in complications with future pregnancies such as uterine rupture, placental implantation problems (when the placenta grows in an abnormal position in the uterus) and, in some cases, the need for a hysterectomy.

Yet gynaecologists and obstetricians are becoming increasingly wary of performing vaginal deliveries. 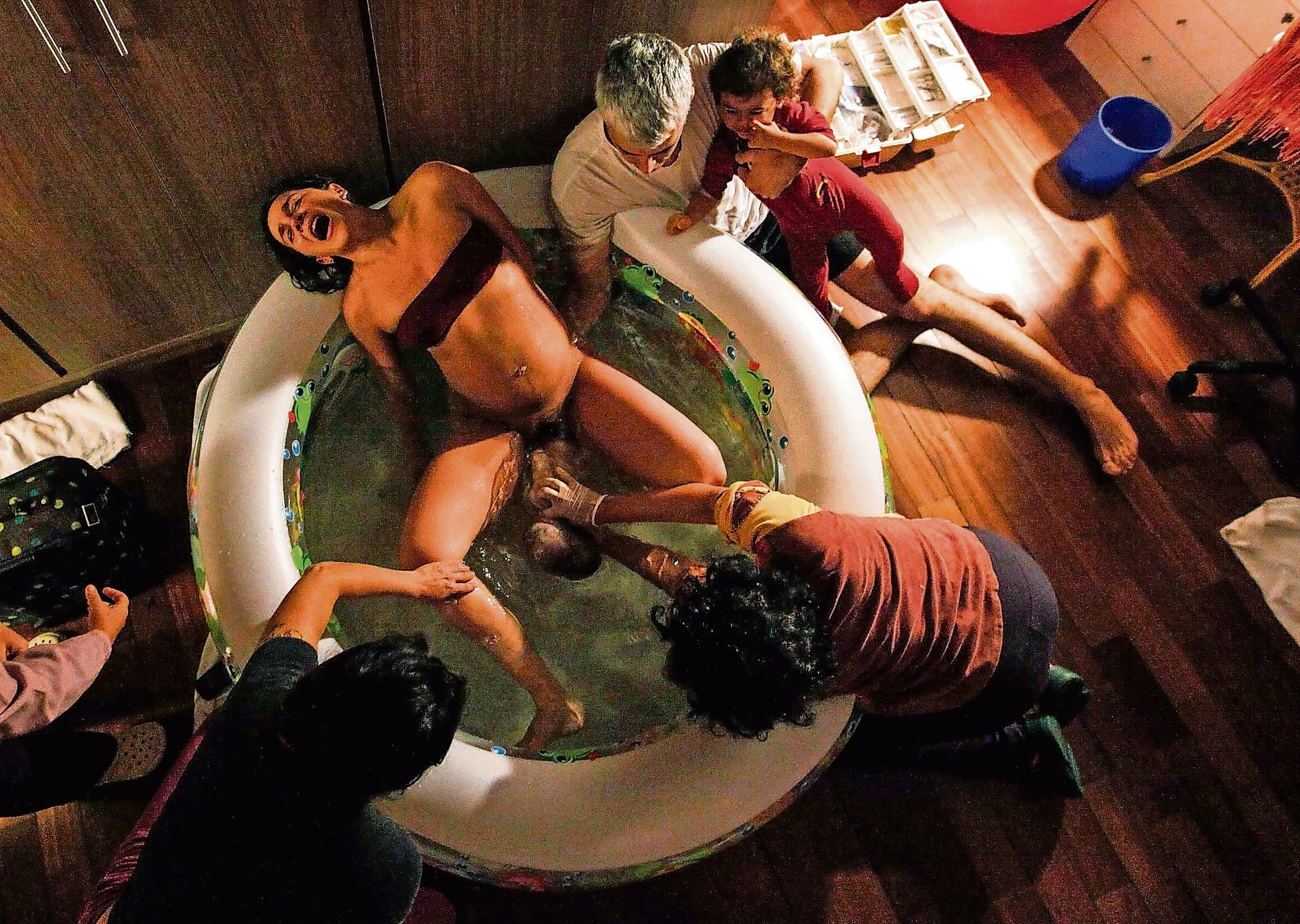 Some women choose to have water births, and with the help of midwives and doulas, they can be safe. (Nacho Doce/Reuters)

Linda van Wyk* knew she wanted a Caesarean section from the moment she realised she was pregnant.

“I was scared of the pain of having labour contractions,” she explains. “At 38, I was also older than most other future moms. The thought of a vaginal birth wasn’t my cup of tea.”

Van Wyk told her gynaecologist that she would like an elective C-section, which would schedule the date of her baby’s delivery ahead of time. “I didn’t get maternity leave so I had to maintain myself and plan carefully for the four months I was taking off work,” she says.

Paul Swart, a gynaecologist at Steve Biko Academic Hospital in Pretoria, says many women in South Africa who can afford medical aid opt for a C-section because of the convenience of having a planned birth.

Of the births paid for by medical aids in 2015, 68% were done by Caesarean section, according to the  2016 annual report of the Council for Medical Schemes, a body that regulates medical schemes in South Africa.

“This figure is the average for births [funded by medical aids] in the private and public sector, as we do not receive a split between public and private hospitals from medical schemes,” says Elsabe Conradie, the council’s manager for stakeholder relations.

“Many expecting mothers want to make sure that their babies are not harmed during delivery and C-sections give them that peace of mind. People don’t manage uncertainty well. It gives them a sense of control to know when the baby will be born,” says Swart.

Van Wyk finished work on Sunday evening and on Monday morning, at 4am on January 4 2010, she made her way to the hospital to deliver her baby at 6am. “I told my doctor that a C-section would allow me to meticulously schedule my daughter’s birth and work until the last moment, and she never told me that I couldn’t do this,” she says.

But it’s not only mothers like Van Wyk who prefer Caesarean sections. Many doctors favour them, too.

Caught between a rock and a hard place
Fear of litigation and the need for a clean record of safe deliveries are the main reasons doctors choose to perform elective C-sections, studies have shown.

Many physicians say C-sections reduce the risk of being sued, even if a vaginal birth would be the optimal choice.

But vaginal birth also comes with risks, found a study published in the American Journal of Perinatology. Babies delivered vaginally may experience birth trauma during complex deliveries and long labours, damaging tissues and organs. A baby’s shoulders can, for instance, get stuck in the birth canal; this is known as shoulder dystocia.

Women who deliver vaginally are more likely to have problems controlling their bowels and bladder after giving birth. They may be more prone to leak urine when they cough, sneeze or laugh, the study says.

According to Swart, most legal claims that involve vaginal births can be ascribed to a condition called hypoxic ischemic encephalopathy (HIE), a disruption in oxygen supply to the baby during the course of labour. This results in the baby being born with brain damage.

“HIE is more common in vaginal births than when the baby is delivered by elective Caesarean section, especially if a woman has prolonged labour. When a baby is brain damaged during birth, the claim can be as high as R30-million.”

Insurance conundrum for doctors
Private-sector gynaecologists and obstetricians face huge medical insurance fees. Swart paid R65 000 a month until May, when he stopped delivering babies in the private sector. “While I’m still in private practice, I only practise gynaecology, which doesn’t involve the delivery of babies [obstetrics]. I did so because of the very toxic environment doctors work in.”

“Gynaecologists are being accused of having only their own interests at heart. But nothing could be further from the truth.”

Patti Good, founder of  My Birth My Choice, a group that promotes making empowered birth choices, says “the fear of being sued or not being able to pay for your medical insurance is not a valid reason to suggest C-sections for mothers who are able to and want to deliver vaginally”.

“The system may be against doctors, but this should not become the burden of their patients,” she says.

Doctors are obliged to disclose the risks and benefits of C-sections and vaginal births to their patients, so that they can make an informed decision while exercising their right to choose between the two options.

Caesarian section or vaginal birth, which is best for you?

The chances of complications arising during an elective C-section are four to eight times lower than when one has an emergency C-section, says Swart. A prolonged labour or complication during labour often results in an emergency Caesarean section.

Not all C–sections result in a safe delivery for mothers and babies. A 2011-2013 report commissioned by the health department, titled Saving Mothers, says bleeding during or after a Caesarean section was responsible for a third of the maternal deaths that took place in South Africa’s public health sector. Many women died as a result of poor surgical skills in some hospitals, a delay in recognising internal bleeding and nurses and doctors responding too late to a mother’s deteriorating vital signs.

“The rate at which a hospital performs C-section births depends on what kind of hospital it is. For example, our Caesarean section rate at Steve Biko Academic Hospital is way above 50%, which is expected because it is a level-three hospital where lots of complicated cases are referred,” says Swart.

The World Health Organisation says national Caesarean section rates higher than 10% do not reduce maternal and newborn deaths. The C-section rate in South Africa’s private hospitals is almost seven times higher than this.

Good says the high Caesarean section rate in South Africa is because women are not informed enough about different birthing options and gynaecologists do what is most convenient for them.

A woman’s choice
Six years after the birth of her daughter, Van Wyk is watching her draw a picture of a dolphin.

She says the painkillers her doctor prescribed helped her cope with the pain of the surgery. Although she could not drive for six weeks, she was able to lift her baby by herself after being discharged.

“If I could go back, I would do it again,” she says and passes a crayon to her daughter.

Good says doctors must take the emotional and medical wellbeing of pregnant women into account.

Ultimately, it is about what the mother thinks is best for her and her baby.

“It is not about Caesarean section birth versus natural birth. It is about hiring a practitioner who supports your choices, then becomes key to having a better birth. This is also about making sure that there is enough information for mothers, so that they are informed when they make this choice.”

Tell us what you think – make a comment and rate our story on a scale of 1 (really bad) to 10 (excellent). We’d love to hear from you.

Why babies and mothers are still dying

Saved: How drug users gained the power to reverse overdoses

After Ebola: What happens when the virus fades and the NGOs — and money — leave?

‘Cancer treatment in the North West is impossible’